“The recordings by the video attached on Naro showed a flash of light 137.19 seconds after launch,” said Education, Science and Technology Minister Ahn Byong-man in a news conference at the Naro Space Center. 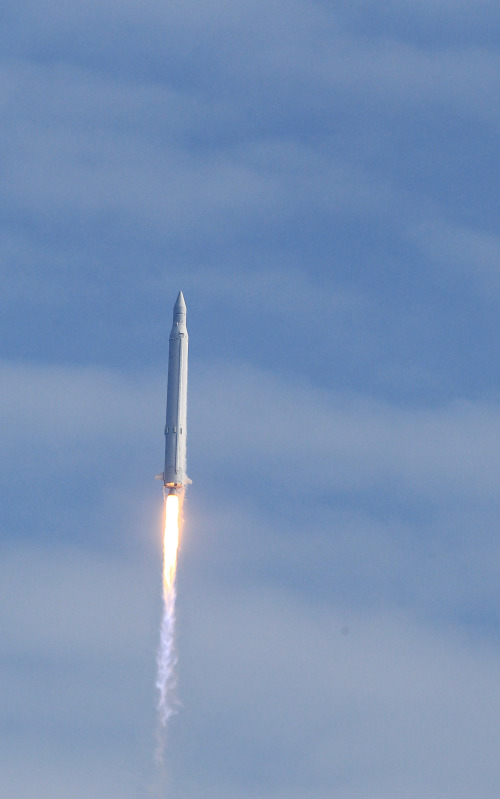 The debris from the rocket is presumed to have landed 30 degrees north latitude and 128 degrees east longitude, said ministry spokesperson Pyun Kyung-bum. The calculated spot is located in the open sea, south of Jeju Island and 470 kilometers from the space center.

The Science Technology Satellite No. 2 is also presumed to have been lost with the rocket, as the explosion took place before the satellite was separated from the rocket.

“We will also officially start the failure review board, as was stated in our contract with Russia, in order to clarify the exact reason for the failure,” Ahn said.

Despite the failure in the second launch of the rocket, the minister vowed to continue the Naro project.

“As soon as the review board reaches a conclusion, we will announce the plan for Naro’s third launch,” said Ahn.

“Though we humbly accept today’s results, we shall not give up on our dream of becoming a space power.”

Naro, or the Korea Space Launch Vehicle-1, was launched from the Naro Space Center at 5:01 p.m. Thursday, after a series of delays.

Communication between Naro and the control center was severed 137 seconds after liftoff, according to the Korea Aerospace Research Institute.

Officials earlier claimed that the communication cutoff did not necessarily indicate a failure and that Naro could come back into contact with the control center.

However, a video from KBS showed Naro stumbling and falling during flight, caught in a cloud of white smoke, causing people to speculate on its explosion.

Citizens who watched the launch from nearby beaches also reported that they witnessed a flash of light high up in the sky.

Amid growing doubts and concerns, the minister’s official announcement confirmed the failure of the much anticipated Naro launch.

Naro was first launched in August last year after seven delays over four years but fell short of complete success as it failed to put the satellite into its planned orbit, due to faulty fairings.

The second launch was set for Wednesday but was once again delayed due to a sudden malfunction of the emergency fire extinguishing system located on the outer side of the launch pad.

Other relatively minor mechanical faults which occurred in between also caused concerns that the space project may falter.

Upon Naro’s midair explosion, Korea has once again failed to join the “space club,” indicating the group of countries which have launched satellites from their own territory. So far, nine countries -- the former Soviet Union, the United States, France, Japan, China, the United Kingdom, India, Israel, and Iran -- have listed themselves as space club members.