Out of the closet and into pop culture 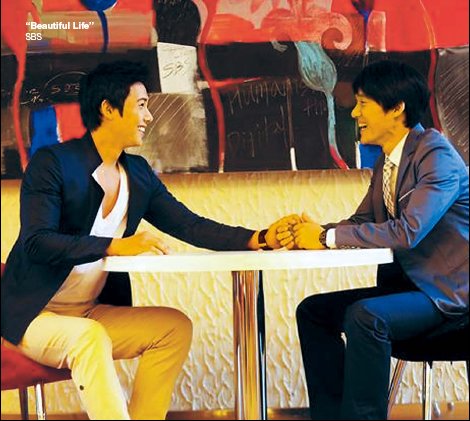 Since the first Korean film on the sensitive subject hit local movie theaters in 1976, homosexual characters have continued to pop up. At first, they were primarily relegated to the sidelines, to indie flicks and to the more experimental theater stage.

When homosexuality made it onto prime time television this year -- not as the subject of a two-part series or as something hinted at but never directly referenced -- then, suffice it to say, the topic came out of the closet and into the spotlight.

SBS’ “Beautiful Life,” a family drama that features a gay couple, has been racking up high ratings of around 17 to 18 percent. MBC’s “Personal Taste,” where heartthrob Lee Min-ho’s lead pretends to be gay, has been bringing in respectable ratings in the 11-13 percent range.

Not only has homosexuality gone mainstream, it is doing so successfully.

But what does all this mean?

“It is a huge surprise for a drama that addresses issues like family conflict, conflict with one’s potential fiancee and coming out of the closet -- issues that many lesbians and gays go through in Korean society -- to air on Saturdays and Sundays on SBS,” Keii, a Lesbian Counseling Center in South Korea counselor, said in a telephone interview.

Korean gay men’s human rights group Chingusai director Park Ki-ho wrote via e-mail: “One could say that having a homosexual character as one of the leads showcases a change in society.”

“It is clear that the frequent appearance of the topic of homosexuality in mass media is basically because our society, in comparison to how it was in the past, is becoming more open,” Cheon said.

While the increase in gay characters could signal a change in society, it may also be influenced by a female-driven consumer market.

There is a significantly higher ratio of gay-themed television shows or films to their lesbian counterparts, which, according to “Antique” director Min Kyu-dong is “because consumers of art are primarily women.”

“Since lots of good-looking men are appearing, more than would appear in a heterosexual-themed work, there is a lot more eye candy for women,” said Keii, who stressed that her opinions were not those of her organization.

Min’s own film, which featured a gay pastry chef, serves as a case in point. According to Min, “Antique” drew an audience that ended up being around 86 percent female.

This might explain why the vast majority of homosexual or potentially gay characters are played by attractive actors like Zo In-sung (who starred in “A Frozen Flower”) or “Coffee Prince” heartthrob Kim Jae-wook (who starred in “Antique”).

Both “A Frozen Flower” director Yu Ha and “Antique” director Min revealed that they did not deliberately target female audiences when casting for their films. However, that does not change the fact that heartthrobs are playing gay leads, characters who tend to be successful and chic professionals.

“Gays on the whole are portrayed within mass media as intelligent, good-looking, gentle men who hold professional positions,” said Cheon at Ewha Womans University. “If, up until now, gays were stereotyped as sick, poor and uneducated, then now they are starting to be stereotyped as good-looking and wealthy characters.”

As with any stereotype, the current one for gay men can hardly be seen as representative of the entire homosexual population.

“Some might say, ‘How often do such beautiful people date like that? It is ridiculous. In reality, it is burly men with beer bellies who go out with each other,’” said Keii.

In fact, to think that the proliferation of gay characters in mass media is directly linked to a growing interest in homosexuals may be a serious misconception.

“Frankly speaking, one cannot see the sudden and recent increase in movies that address homosexuality as a sign that Korean movies are starting to take a full-fledged interest in homosexuality,” director Yu Ha wrote in an e-mail interview.

Then what does it signify?

Cho Han-jun -- director of the play “Beautiful Sunday,” where Jung Il-woo took on the role of a gay man -- suggested that it might be a sign that consumers are always looking for the next hot topic, so when they are bored with a current trend they move onto another one, which, in this case, would be homosexuality.

Cheon, however, begs to differ: “I think the frequent appearance of homosexuality in mass media could be a reflection that our society’s broad-mindedness towards diversity and minorities has reached a significantly higher level of tolerance.”