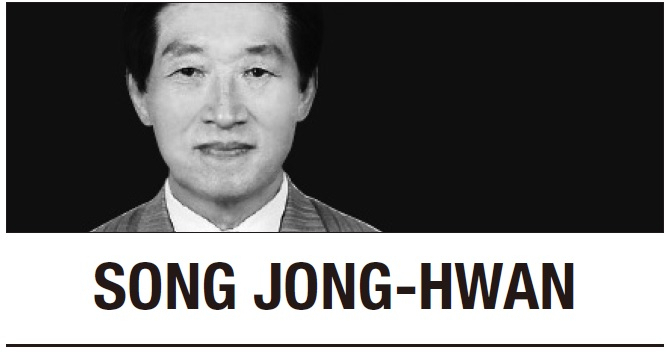 Buddhism was introduced to Korea through two paths: the ancient Korean kingdoms of Goguryeo and Baekje. In 372, the emperor of Former Qin, a Chinese dynasty, sent an envoy and monk to Goguryeo’s King Sosurim, with Buddhist statues and scriptures. Twelve years later in 384, the monk Marananta, born in Chota Lahore in north Pakistan, crossed the ocean to Baekje via Eastern Jin, another Chinese dynasty, to bring Buddhism to King Chimnyu of Baekje.

It is said that when Marananta decided to leave what is now Pakistan on this long journey in order to spread Buddhism to the faraway country, Marananta’s teacher gave him a stone sculpture of Buddha’s head. Marananta’s teacher told him that if he encountered rough seas, he should throw the sculpture into the ocean. Indeed, Marananta was able to safely arrive in Baekje because he did exactly as his teacher said when a big storm came over his ship. When Marananta safely arrived at port, he was astonished to find that the stone sculpture of Buddha’s head which he had thrown into the ocean had arrived in port ahead of him. This port in South Jeolla Province is now called Beopseongpo, or "Harbor of Holy Buddhist Monk." The temple Bulgapsa, which was the very first Buddhist temple to be built in Korea, is now located there. In 2005, Marananta Temple, known as the Sacred Memorial Ground of the Birthplace of Korean Buddhism, was built in the area as well.

Pakistan is sometimes associated with negative images of terrorism, but as one who served as Korea’s ambassador to Pakistan from 2013 to 2016, I have never forgotten the kindness and hospitality of the people of Pakistan. I continue to do all I can to foster a closer relationship between Korea and Pakistan, and strongly believe that with a population of more than 220 million, Pakistan is a land of limitless potential for growth.

As a nation that received aid from Pakistan in South Korea’s most dire hour of need, South Korea is now in a position to be able to share some of its success. South Korea must strive to repay Pakistan’s generosity, and must work to develop a cooperative, win-win relationship with Pakistan, which will fill in for each other’s potential areas of weakness.

In 1997, Daewoo Construction Co. -- now Daewoo E&C -- built a 357-kilometer highway from Islamabad to Lahore in Pakistan, and Korea became known as an economically advanced country with one of the top 10 biggest economies in the world. The pride I felt in my country could also be felt in Pakistan.

The government of South Korea increased the Economic Development Cooperation Fund loans for Pakistan up to $1 billion for five years (2022-26). The Korea International Cooperation Agency is continuing to provide development grants to the government of Pakistan. Through the EDCF, an IT park is being constructed in Islamabad. The two countries are actively pursuing cooperation in the areas of national defense, education and tourism. Korean corporations such as Lotte Confectionery, Hyundai Motor Group, Samsung and hydroelectricity companies are expanding their businesses to Pakistan. Currently there are more than 10,000 workers from Pakistan in Korea, and this year the annual employment quota for workers from Pakistan has been increased to 2,500 per year.

Buddhism is a medium that can further develop the relationship between Pakistan and Korea.

First, I suggest that the Buddhist community of Korea establish a Gandhara Cultural Research Center in Pakistan, with the goal of expanding it into a university specializing in the Buddhist historic sites of Pakistan.

Second, I suggest developing religious tourism programs in which the Korean Buddhist community can periodically visit Pakistan for pilgrimage to their holy sites. I recommend the resumption of plans to charter planes specifically for tourism in Pakistan, by widely promoting such plans in Korea and to the overseas Pakistanis in Korea.

Third, I recommend international exhibitions in several countries such as Thailand, China, Korea and Japan, of the Fasting Siddhartha which is housed in Lahore Museum. I am certain that such an exhibition of the intricate beauty of Pakistan’s art will deeply move the Buddhist community all over the world and provide an opportunity to replenish Pakistan’s foreign currency reserves.

Dr. Song Jong-hwan is a chair professor at Kyungnam University and a former Korean ambassador to Pakistan. -- Ed.