[Elizabeth Shackelford] Will US foreign policy change after the midterms? 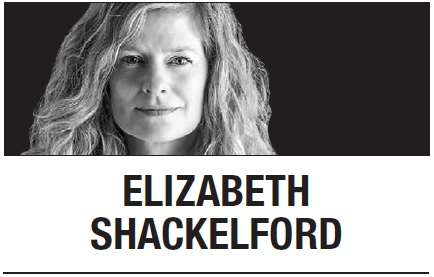 Friends and allies around the world are likely breathing a sigh of relief that the predicted red wave never crashed. Our partners around the globe have been pleased by President Joe Biden’s “America is Back” foreign policy, and all signs point to that direction continuing.

Supporters of democracy the world over are also taking comfort in the fact that Donald Trump’s hand-picked anti-democracy candidates had a poor showing. Many election deniers were elected to the House, but a large majority of those running for positions that involve election oversight -- including for governor and secretary of state -- were defeated.

The election denier caucus in the House will be loud and alarming, but they thankfully won’t be positioned to throw the 2024 elections into a constitutional crisis by refusing to certify legitimate results. That’s essential not only for our domestic security but also our position in the world.

European allies are most concerned about whether robust American support to Ukraine will continue. After all, Congress’ primary power in foreign affairs is allocating or withholding money -- the power of the purse. Biden can make a lot of foreign affairs decisions, but if he can’t pay for them, they only mean so much.

Kevin McCarthy, who will become House speaker now that the Republicans have eked out a majority, has already made clear that a Republican-controlled House would not give Ukraine support a “blank check,” even though much of the Republican Party is staunchly behind Ukraine’s fight, as is a majority of the American public. Even if the majority of the House supports Ukraine assistance, McCarthy could choose not to bring it to a vote if part of his caucus strongly opposes it.

This is why the Biden administration has asked Congress to pass a large assistance package during the lame duck session, while both houses are still under Democratic control. If passed, this will significantly insulate the administration’s policy decisions toward Ukraine in the near term. Since the administration has done a sound job so far balancing US interests and risks involved in this war, that’s good news for US policy.

After Ukraine, the most watched area of US foreign policy is China, but that contentious relationship isn’t likely to change much. The Biden administration’s combative approach is popular on both sides of the aisle, though some in the Republican Party have a knack for escalating negative rhetoric. This may have partly driven Biden’s more measured approach in his recent meeting with Xi Jinping. It won’t get any easier navigating the fine line of competition and cooperation with China with a divided Congress, so the change in tone is welcome.

The midterm results could impact US foreign policy in other important but less obvious ways.

The only place the red wave seemed to hit was Florida. (Coincidence or inevitable given its vulnerability to rising waters and hostility to renewable energy?) This could actually open up foreign policy options for the Biden administration in Latin America.

Since Florida was considered a critical purple state key to securing the presidency, the powerful Latino constituency in Florida has long played an outsized role in the direction of US policy toward Cuba, Venezuela, and other Latin American countries. Upsetting this voting bloc was considered politically unwise, but if a Democratic administration has no hope of winning Florida’s electoral votes or Senate seats, that calculation changes, and our relationship with those countries could as well. The Biden administration today might be more willing to pursue diplomatic and economic engagement in countries there where our bilateral relationships have been strained.

Pay attention to the administration’s reassessment of the relationship with Saudi Arabia too. After the kingdom slashed oil production in October, considered by many an intentional snub to Biden, administration officials were livid but hesitant to take major action so close to the midterms.

With the election behind them, Biden’s national security team might have enough breathing room to confront a longtime partnership with an authoritarian government that hasn’t delivered. A shift with Saudi Arabia could reinvigorate talks with Iran as well, but Iran’s ongoing protests, and subsequent crackdowns, will remain an obstacle to thawing relations there for now.

The most notable and public foreign policy impact of the new Congress will likely be congressional hearings. A Republican-controlled Congress has previewed the many ways it hopes to be a thorn in Biden’s side, and hosting weeks of hearings to critique Biden’s policy record is high on that list. At a minimum, expect the withdrawal from Afghanistan to be put on public trial, consuming the administration’s time and attention, at the expense of other domestic and foreign policy priorities.

The administration will have less leeway to act than before, but we can expect the United States to remain an active player in the world, continuing its support for allies and for Ukraine’s fight, and maybe just a little less friendly to some of the world’s autocrats. This former diplomat would consider that outcome a midterm win for US foreign policy.