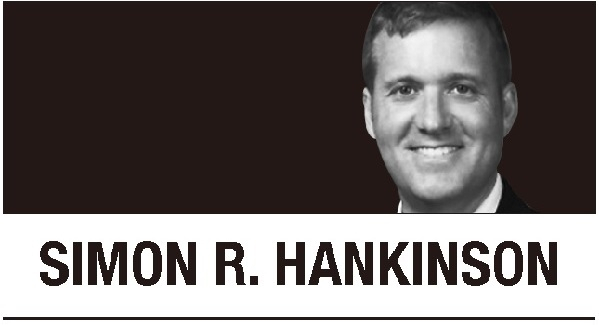 Fighting for the high ground on contentious political issues inspires a partisan twisting of the English language. Take this Oct. 19 news from Immigration and Customs Enforcement that “officers arrested 175 unlawfully present noncitizens with multiple DUI convictions.”

“Unlawfully present noncitizens” is how our Department of Homeland Security describes illegal (a synonym for unlawful) aliens (the legal term for noncitizens).

In line with open-borders advocates, DHS now calls people with no legal right to enter or live in the United States “undocumented,” as if they simply left their valid passport and visa at the bus station. Activists want Americans to believe that being “undocumented” is just red tape, a bureaucratic hiccup, not an ongoing state of law-breaking by someone who, typically, has the means and ability to return to his home country.

“Parole” used to mean taking someone’s word to do something you were pretty sure they would do. Now, it is the excuse that DHS Secretary Alejandro Mayorkas uses to release hundreds of thousands of illegal immigrants per year, well aware that relatively few will keep their promise to show up to immigration court throughout the process until their case is decided.

DHS has taken similar liberties with “significant public benefit” and “humanitarian” -- terms that qualify the department’s discretion to grant parole. Is every single Russian’s attempt to enter the US really a humanitarian emergency? Is it really a “significant” benefit to the US public to allow in every last Brazilian who knocks at the door?

“Asylum seeker” is used to describe nearly all illegal entrants, even though the vast majority are economic migrants who don’t qualify under US law for that status, or don’t even apply.

Immigration is just one policy area where spades become "spearhead-shaped digging implements." Using language to obscure unpalatable policies or to distort debate is a ploy on both the political Left and Right, but the Left has the upper hand in creativity.

As to what is a woman, some college students don’t even want to let the Daily Wire’s Matt Walsh on their campuses to ask the question. President Joe Biden recently met at the White House with transgender activist Dylan Mulvaney. Biden seemed convinced that Mulvaney is a woman, though not everyone agrees. (Note: The president also believes that the economy is “strong as hell” and that a recession is improbable). One thing we do know is that adding “woman” to a person’s bio can make them a champion swimmer and greatly increase the speed of their volleyball spike.

“Racism” used to mean treating people differently based on their race, preferring one over the other. Now, according to a training pamphlet for workers at Home Depot, it’s “racial prejudice plus power,” a definition straight from critical race theory (CRT). In 2020, the Anti-Defamation League defined racism as "the marginalization and/or oppression of people of color based on a socially constructed racial hierarchy that privileges White people" -- also pure CRT.

“Unsafe” used to refer to physical safety. Now, it can mean “things that make me uncomfortable.” Some college students feel “unsafe” when people with differing opinions want to speak on their campus. "Irreversible Damage" author Abigail Shrier faced this at Princeton, as did pro-life speaker Ryan Bomberger at Wheaton College. (Somehow, youth outrage is far less often directed at leftist speakers.) Activist Patrisse Cullors said that journalists investigating her spending of BLM donors’ money on luxury houses and contracts with her friends and relatives made her feel “unsafe.”

“Gender affirming health care” sounds like it means helping people to accept the physical reality of their bodies. It is also official US policy. However, Sen. Ted Cruz, R-Texas, calls it “one of the most Orwellian phrases (he’s) ever heard,” because to the Left, it means unquestioningly giving puberty blockers, cross-sex hormones and irrevocable surgery to match children’s perceived -- and likely transient -- “gender identity.” Advocates of “gender affirming health care” avoid using accurate clinical terms such as mastectomy, sterilization or castration in favor of euphemisms like “top surgery,” “bottom surgery” or “life-saving medical treatment.”

Given the Left’s penchant for grammatical gamesmanship, it’s amazing that ICE still used the phrase “drunk drivers” in their press release, instead of something like "alcohol-enhanced motor vehicle operators.”

Enough with the double-talk. Let’s use real words to convey the truth on immigration and other important matters of public policy, and trust citizen-voters to handle it.