[Gareth Evans] Australia’s minister of everything 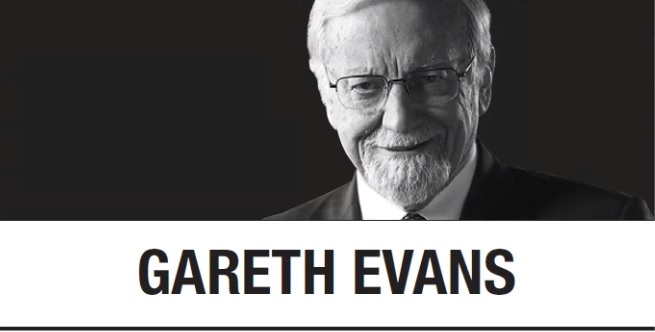 Australia continues to be a source of bemused fascination to students of Western parliamentary democracy. After a pantomime period not so long ago in which the country changed its leader five times in five years, it has now been revealed that our most recently defeated prime minister, Scott Morrison, contrived over the past two years effectively to appoint himself minister to no fewer than five other major government departments. Moreover, Morrison did so without -- except in one case -- the knowledge or agreement of the minister whose job he was duplicating, and without informing his cabinet colleagues, parliament, or the Australian public.

That is chutzpah on a scale that might astound even Boris Johnson, the United Kingdom’s soon-to-be ex-prime minister. And the recent verdict on the constitutional propriety of Morrison’s actions by Australia’s solicitor-general is excruciatingly clear. The country’s top non-political lawyer concluded that, while the prime minister’s self-appointments were not illegal, they “fundamentally undermined” the principles of responsible government: “Neither the people nor the Parliament can hold a Minister accountable for the exercise (or, just as importantly, for the non-exercise) of particular statutory powers if they are not aware that the Minister has those powers.”

Morrison’s defense of his conduct has been laughable, though one of his self-appointments, as second health minister, made at the height of the COVID-19 pandemic and with the consent of the incumbent, did have a sliver of justification. The emergency powers of the office were enormously wide-ranging, and arguably demanded an instantly available backup if the primary minister fell seriously ill.

None of Morrison’s other ministerial self-appointments -- to the energy, home affairs, finance, and treasury portfolios -- had even that shred of justification. The only occasion when the prime minister actually used his additional powers had nothing to do with the pandemic. Anxious to avoid an electoral wipeout in some green-inclined areas, he overrode his co-energy minister to reject a controversial offshore gas exploration permit.

The revelation of all these appointments has enraged the second-guessed former ministers, and for good reason. Morrison’s actions cannot be explained as anything other than an exercise of hubris by a prime minister who believed that he had won an unwinnable election on his own in 2019, had little confidence in even his most senior cabinet colleagues’ competence and judgment, and was determined to retain personal control of all the key levers of power.

“I was steering the ship in the middle of the tempest,” Morrison explained to a visibly underwhelmed press corps, whose members suggested, not unreasonably, that he might not have sailed very far without a crew to support him.

Australia’s new Labor government is now initiating an inquiry to explore how Morrison’s megalomaniacal machinations proceeded with such secrecy, why more alarm bells did not ring with his personal and public-service advisers, and how to ensure that the basic conventions of responsible government are safeguarded in the future.

It will be difficult for any such inquiry to avoid exploring the contribution to the fiasco of the governor-general, David Hurley, Queen Elizabeth II’s representative in Australia, whose decision it was under the constitution to appoint Morrison to the other ministerial roles. Of course, the governor-general was obliged, as his defenders insist, to accept his prime minister’s advice, given that Morrison clearly commanded majority support in parliament.

But Hurley -- a decent man, but one who most Australians could neither name nor recognize in a line-up -- seems to have neglected to ask Morrison any pertinent questions. Why did the prime minister need these powers? Did he have the consent of his colleagues?

Because Hurley did not ask these questions, many thinking Australians are now asking their own: What exactly is the point of having a head of state, in the form of the governor-general, who has no apparent sense of the fundamental constitutional principles he or she is pledged to protect? And if we are going to have a merely symbolic cipher in the role, why not at least have one who is genuinely homegrown, not merely the delegate of a distant monarch? The movement for Australia to become a republic is gradually developing a new head of steam as Queen Elizabeth’s long reign draws to its inevitable close, and the Morrison saga will do the cause no harm.

The political fallout from the controversy has already been considerable. Many members of Morrison’s Liberal-National Coalition, still in disarray following their thumping electoral loss in May, have made no secret of their outrage at his behavior. The affair has further boosted the record approval ratings of new Labor Prime Minister Anthony Albanese and his government.

There seems to be a general sense of relief that Australia at last appears to have adults back in charge, and that the long years of too-often dysfunctional government and bizarre political surprises may finally be over. But given our record over the past decade or more, who can be confident?


Gareth Evans
Gareth Evans, a former foreign minister of Australia, is President Emeritus of the International Crisis Group, Founding Convenor of the Asia-Pacific Leadership Network for Nuclear Non-Proliferation and Disarmament, and an honorary professor at Australian National University.