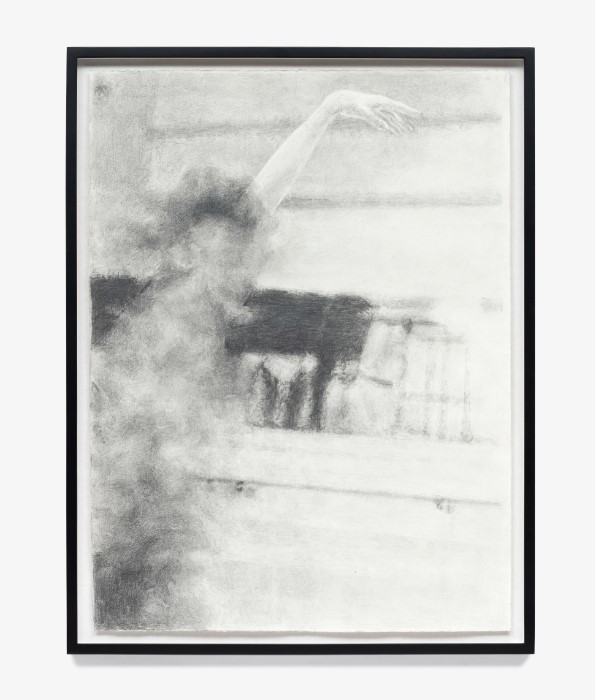 "Untitled (Goh Choo San 5)” by Lee Kang-seung (Gallery Hyundai)
Following is the first in a six-part series highlighting the next generation of Korean artists active in the international art scene. – Ed

The acclaimed photographer and choreographer were active in the West in the late 20th century. Yet, they were marginalized individuals who faced discrimination and prejudice. They both died after contracting AIDS. The graphite drawings were shown at Gallery Hyundai in 2021.

“They may seem to have disappeared from history, but their lives, in fact, have influenced ours enormously and remain important today,” Lee said in a recent interview with The Korea Herald.

Lee emphasizes “intergenerational relationship care” when talking about his art. He is drawn to individuals that represent marginalized communities.

“The past generation can be visualized through the next generation’s care. This is applicable not just to marginalized people, but to history in general,” Lee said.

Currently based in Los Angeles, Lee recalled his teen years in South Korea in a society that held conservative views of the LGBT community. Words to describe sexual orientation were not commonly used in the late 1990s.

“The history of people from the queer community was erased completely from our (South Korea’s) history,” Lee said. “They were not properly dealt with by the media as well. It was 2000 when Korean entertainer Hong Seok-cheon came out, and it came as a shock to Korean society.”

Believing in the power of visual art, Lee began to rewrite the history of marginalized people through his art, collecting materials on the marginalized that rarely exist in the mainstream historical narrative. It was a “scavenging method,” according to Lee.

A key source has been the Korea Queer Archive, where records of the Korean LGBT community have been collected since 2009 and which has become an important archival site for researchers and artists, Lee explained. 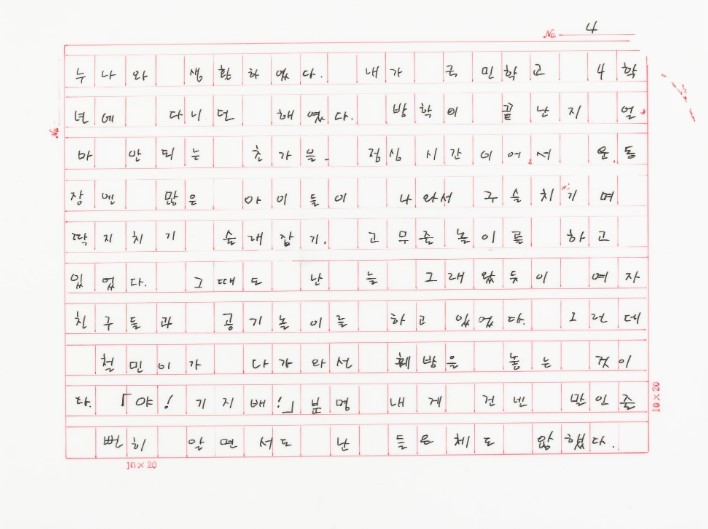 “Untitled (Wongoji)” is one of the works inspired by archival materials donated to South Korea’s first-ever LGBT magazine, Buddy. Published from 1998 to 2003, the magazine can be accessed at the Korea Queer Archive site.

The source of Lee’s inspiration was some 80 pages of a journal written on “wongoji,” writing paper with printed squares, by a transgender woman about life as a teenager abused by her family.

Lee drew the wongoji and wrote on Yupo paper, a recyclable, waterproof and tree-free paper, in ink. From a distance, they look like pages from the original journal.

The work seems like the artist’s desperate effort to express respect and sympathy for the long-neglected marginalized people in Korean society. In fact, the highly labor-intensive process is what Lee values, considering labor a medium that helps build a relationship between the artist and previous generations.

“Labor is quite an important part of my work as an artist who deals with history. Labor and time invested in my work are a way to embody someone’s history. I believe power is imbued in my work through the process,” Lee said.

The 24-carat gold thread embroidery on Korean hemp fiber is also a product of Lee’s labor-intensive work process that gives life to the connection between the present and previous generations.

Lee’s works were shown at the 13th Gwangju Biennale and the fifth New Museum Triennial last year; and at the group exhibition “Looking for Another Family” at the National Museum of Modern and Contemporary Art, Korea, in 2020. He was also selected as an artist of Monumental Perspectives -- a collaborative project between the Los Angeles County Museum of Art and Snapchat.

“I would say Lee is an artist who rewrites history, discovering facts that are little known to us,” said Park Joo-won, a curator at MMCA who was associate curator at the 13th Gwangju Biennale.

“The concept of ‘queer’ that Lee has raised is quite interesting -- anyone can be queer. When it comes to queer, we naturally think of LGBT, but queer can expand to a concept that encompasses the society’s marginalized, beyond the gender issue,” Park said. “Although you are part of the mainstream in South Korea, you can be part of the marginalized society in different regions.”

Lee values the strength produced in collective work. As part of his solo exhibition “Briefly Gorgeous” at the Gallery Hyundai last year, he reproduced a gay club in the gallery basement in collaboration with eight other artists, displaying works created by fellow artists and playing music selected by those who wished to pay tribute to history to gay clubs.

The collaboration was an homage to the disappearing gay clubs that were an important place where members of the LGBT community could be themselves and communicate freely. It was a place that had energy and freedom, Lee said.

”Many artistic practices speaking out for marginalized people have a sense of activism. It is not a conventional form of activism, but I am the type of artist willing to take the role of an activist because of the many activists throughout history that have influenced me,” Lee said.