Ministry backpedals on its plan to ban free wet tissues in restaurants; environmental impacts of reckless use kept out of discussion

In just a few years, wet wipes have become a daily necessity that many can’t live without.

They are used for everything from baby’s bottoms to floor spills, potentially virus-contaminated door handles and facial makeup. They are convenient, hygienic and cheap.

The wipes, or at least most of the ones sold in Korea now, are not biodegradable. Made of plastic fibers, it could take more than 100 years for them to decompose or dissolve, experts say.

Yet, Korea is not doing much other than just watching the use of plastic wipes expand and diversify.

A Korea Herald investigation has found that the Environment Ministry, which earlier this year publicized a plan to ban free offerings of plastic wet tissues at restaurants and cafes, has clearly lost enthusiasm for the move. If realized, the scheme would have marked the first real step to curbing wet wipes use in Korea.

“The prevalent view among the public is that banning wet wipes at restaurants could be met with hygiene concerns from customers due to virus risks,” said Seo Young-tae, the ministry’s director of resources circulation policy division.

In January, the ministry gave advance notice of the legislation, which would revise the Promotion of Saving and Recycling of Resources Act and, among others, ban single-use plastic wet wipes in restaurants and coffee shops. The draft legislation says non-plastic wet tissues or towels must be used in those establishments as substitutes.

Conventional cloth towels – which can be reused after washing – would be one option, but there appears to be a strong aversion to them, stemming from hygiene concerns such as germs and bacteria. Wet towels were more widely used in restaurants in the past until single-use wipes replaced them precisely for that reason.

The ministry is still striving to submit a legislative proposal for the act’s revision by the end of this year, Seo said.

“It won’t be a full ban on the use of wet tissues. We will consider other options such as encouraging the use of paper tissues instead,” he said. “For the environment, we should push ahead with the ban. But when it involves sanitation, the problem gets very thorny,” he added.

Wet wipes, however, will remain unregulated. 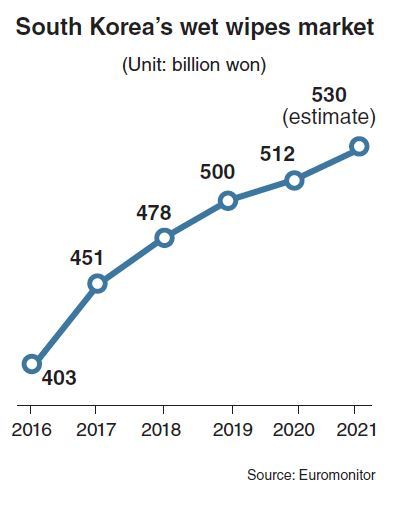 Restaurants and cafes offering guests something for hand hygiene for free was considered an act of kindness. And the COVID-19 pandemic has made it almost essential for those establishments.

According to Statistics Korea, in 2020, the first year under the pandemic, 343,024 metric tons of wet tissues were produced for use at food and beverage establishments in S. Korea, up 26,527 tons from a year earlier. Industry insiders said it was highly likely that the numbers inched higher last year.

Restaurant use, however, may be the tip of the iceberg.

There is not a comprehensive and reliable data on the use of plastic-based wipes in Korea.

Consumers Korea, a local civic group, estimates the volume of wet wipes produced a year here at more than 1.29 million tons. It is unclear whether this includes both restaurant and household use.

In January last year, the Gyeonggi Provincial Government conducted a survey on the use of wet wipes on 1,000 adults residing in the province. Nine out of 10 respondents said they had used wet wipes at least one in the past month. Those who had used an average 5.1 sheets per day, the survey found.

Euromonitor International, a global market research firm, assessed the country’s wet wipes market size -- including both restaurant and household use -- at 530 billion won ($406 million) in 2021, up 31.3 percent from 403 billion won in 2016.

Product diversification is a major trend in the market.

Despite its widespread availability, many people don’t know what wet wipes are made of or the consequences of using them.

Wet wipes are generally made of synthetic fibers containing 40-50 percent plastic materials -- polyester and polypropylene -- which are difficult to recycle and take a long time to decompose naturally.

Civic groups have been expressing concerns that wet wipes, especially those for toilet use, harm the environment.

“Wet wipes have microplastics, which are the biggest cause of marine and soil pollution, including beaches and rivers, and negatively impact wildlife,” said an official at the Korea Woman‘s Federation for Consumers.

For example, Gimhae, a city in South Gyeongsang Province, spends 1 billion won a year on dealing with more than 600 tons of waste generated in the sewage treatment plant as wipes clog sewage pipes.

The above-mentioned survey of Gyeonggi residents found that only 35 percent of respondents know that wet wipes are made of plastics. Some 44 percent said they don’t know what they are made of, while 20 percent thought they were made of natural materials such as pulp and cotton.

Wet wipes are not just convenient -- they are incredibly cheap in South Korea.

One of the reasons is that major retailers use them as a bait to attract customers. The cheapest product from the country’s leading e-commerce platform, Coupang, is just 700 won (53 cents) for a pack of 100 sheets.

Wet tissues are also completely exempt from waste disposal charges that the government places on plastic products as an environmental tax.

Imposing the waste charge on wet tissues could lead to a price hike, making plastic-based wipes less economical than those made of other materials such as pulp.

But the Environment Ministry says it has no plans to do so.

“Currently, we don’t have plans for wet tissues to be subjected to waste disposal charges,” another Environment Ministry official said on August 8.

Currently, for products with plastic materials, manufacturers and importers are required to pay 150 won ($0.1) per kilogram, which is only one-seventh of the level charged in Europe.

The ministry is moving to increase heavier charges imposed on manufacturers or importers of products that are unrecyclable or contain hazardous substances. It will be the first hike in almost 10 years if it comes to fruition.

The ministry official explained that the related law stipulates that synthetic fiber products, which include wet wipes and clothes, to be excluded from charges. The law will have to revised for plastic-based wet issues to be subject to the levy.

There are voices calling for immediate government action on the proliferation of various wipes, but they are not yet strong enough.

In 2020, attempts to tackle wet wipe-induced pollution had been made, but failed to gain traction.

The Gyeonggi Provincial Government and Rep. Yoon Mee-hyang had separately called for the government to categorize wet tissues as plastic.

“In order to curb the manufacture and use of disposable wipes, it is necessary to categorize wet wipes as plastic rather than textile products,” Rep. Yoon said.

The provincial government submitted a proposal to the central government to include wet wipes on the list of plastic products subjected to waste charges.

Cutting the use of nonrecyclable products is the most effective option of the three steps of waste management -- reduce, reuse and recycle, said Park Seok-soon, a professor at Ewha Womans University’s environmental science and engineering faculty.

“The government needs to harness policies to reduce the amount of waste, while consumers also have to realize that the use of wet tissues poses a risk to the environment,” he said.