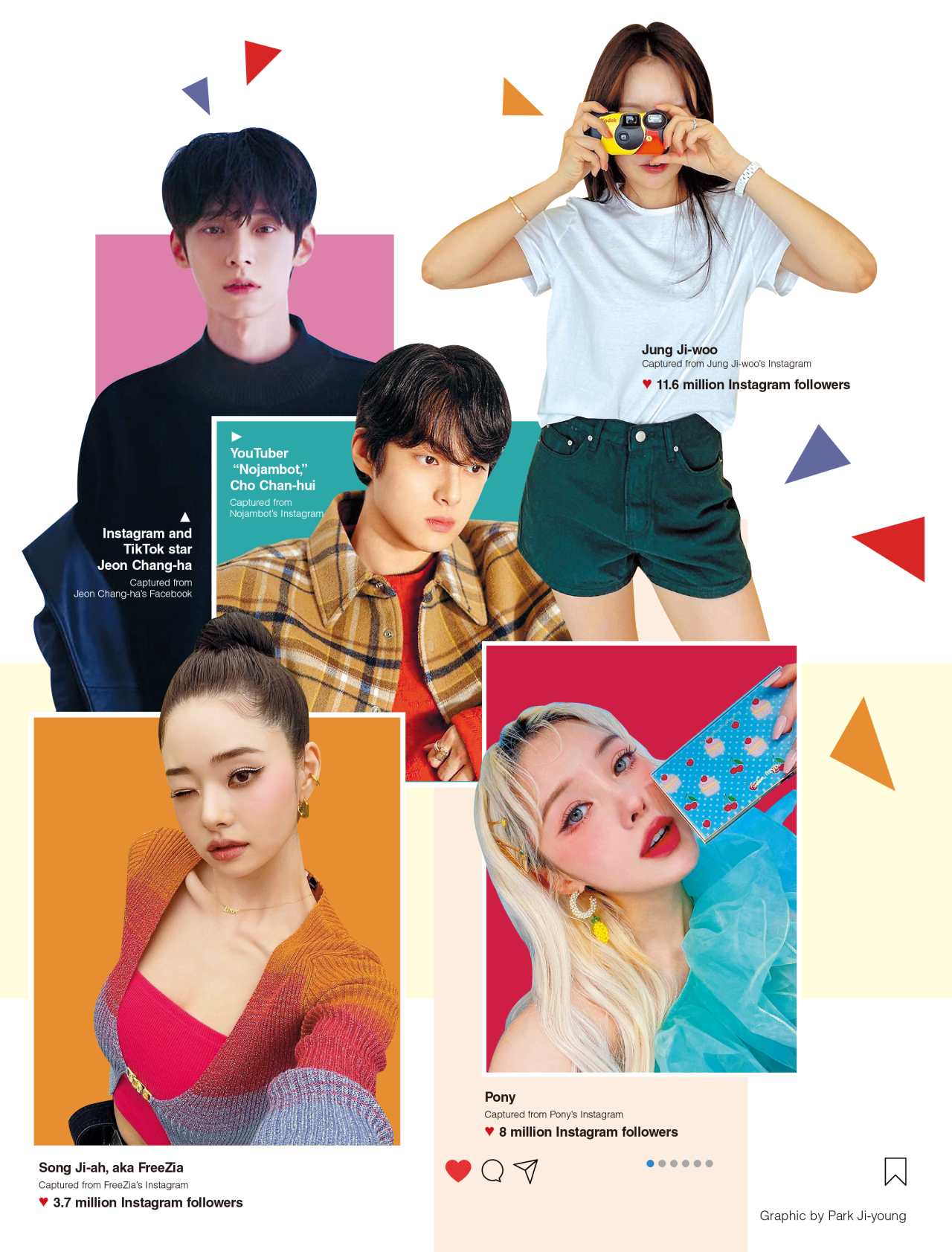 A 23-year-old university student surnamed Han has a study partner whom he has never met. When Han studies for exams, he plays videos of Cho Chan-hui, a Korean influencer and YouTuber also known as Nojambot.

Cho, a high school dropout studying to become a police officer, broadcasts and posts videos of himself studying for hours. He has over 152,000 followers on Instagram and 400,000 subscribers on YouTube. He gained fame overnight in 2017, when a video of him studying went viral.

“Yes, Nojambot is handsome, but that’s not why I follow him,” said Han. “(I feel less lonely because) it feels like I am studying with him.“

Lee Eun-ju, a white-collar worker in her 20s, is an ardent follower of Pony -- a makeup artist and beauty influencer with 5.9 million YouTube subscribers.

“We don’t often have the opportunity to learn makeup from pro artists. But makeup tutorials on YouTube are all for free, and that’s why I started to subscribe to Pony. I trust her recommendations on cosmetics, since she explains both the pros and cons of the products,” Lee said.

Lee and Han are among many South Koreans who are drawn to influencers who have built an online reputation within a specific niche like fashion, beauty and travel. They don’t necessarily have the same talents as singers or actors have, but young people say it is the lifestyle they pursue -- usually a unique or glamorous one -- that appeals to them.

With the influencer boom fueled by YouTube, Instagram and TikTok, a growing number of companies are scrambling to capitalize off of their fame.

“The power of influencers in marketing is way beyond imagination,” said a public relations officer who works at a Korean agency.

“Most companies opt for influencers rather than actors or singers, as it is a more effective advertising strategy. Using influencers who best fit with the companies’ target consumers leads to huge spike in sales,“ said the PR officer who requested anonymity.

Mega influencers, who connect with more than 1 million followers, are paid around 50 million-70 million won ($38,500-$53,800) in commission, the officer said. Companies have to get a hold of them at least six months in prior to when the ads are scheduled for release.

“Top influencers tend to go on a strict diet or do workouts before shooting ads. In good faith, they avoid accepting similar ads from other companies within the contract period to maintain a high profile in the marketing business,” the officer added. “For instance, if an influencer posts a lipstick video on YouTube, she does not upload other sponsored lipstick posts for a month or two.”

Before stepping foot into the world of TikTok, Jeon was a university student living in the southeastern city of Daegu. The college student-turned-influencer gained fame when his TikTok videos went viral overseas. After garnering media attention, Jeon also played the lead role in web drama “First Love Again,” which aired earlier this year.

Experts say the fast-growing hype for influencers is particularly driven by millennials and Generation Z -- those born between the 1980s and 2010s -- who wish to align themselves with trendsetters.

“The young generation tends to purchase what influencers wear or visit places they go, to be as cool as them and have a sense of belonging to the so-called trend leaders,” said Lee Eun-hee, a consumer science professor at Inha University. “It is often inspired by a desire of not wanting to be ‘left behind’ in the fast-changing trend.”

Some have complained about how influencers are making easy money.

Kim Woo-kyung, a 42-year-old fashion company employee said, “It is frustrating to see influencers who earn money worth an annual salary just by wearing our brand clothes. I even feel there is no point in studying hard and attending top universities because you can make a lot more if you are born pretty, handsome or tall like them.”

But the price of fame comes at a high cost, since influencers, like celebrities, come under tight public scrutiny.

Song Ji-ah, a YouTuber and contestant on Netflix’s hit reality dating show “Single’s Inferno,” stirred public anger for wearing counterfeit luxury items on YouTube. Song has deleted all the posts earlier this year and said on Instagram that she was sorry to have committed copyright infringement. After six months, Song has recently signaled a return with a new YouTube video. The latest tally shows Song has 1.8 million subscribers.

Noze, the leader of dance group WayB and a cast member in Mnet’s hit TV show “Street Woman Fighter,” has also been involved in a scandal recently. Noze was reportedly said to have uploaded posts of sponsored items in her Instagram way past the contractual date, although she had received tens of millions of won in commission. She was condemned for deleting posts that advertised items from small companies, leaving up only pictures of sponsored bags and other products from luxury brands.

The influencer scandals are bad news for the companies who hire them to be the face of their brands. Unlike actors, singers or other celebrities, most contracts do not involve a clause demanding influencers who have harmed the firm’s image or reputation compensate the company.

“Influencer marketing is effective but it also carries great risks. Companies should not only go through a proper vetting process before hiring them but make efforts to raise awareness that they are responsible for promoting brand image to create trust with consumers,” Lee said.

According to the tax agency, influencers including YouTubers and streamers had been categorized as a “one-person media creator” in 2020 and are subject to taxation. But the authorities still have difficulties taxing them as some are trying to avoid paying taxes by turning in false tax filings.

The top 1 percent of one-man content creators in Korea earned an average of 671 million won in 2019, according to a 2021 report by Yang Kyung-sook of the ruling Democratic Party quoting the National Tax Service data.