[Newsmaker] 2022 local elections by the numbers 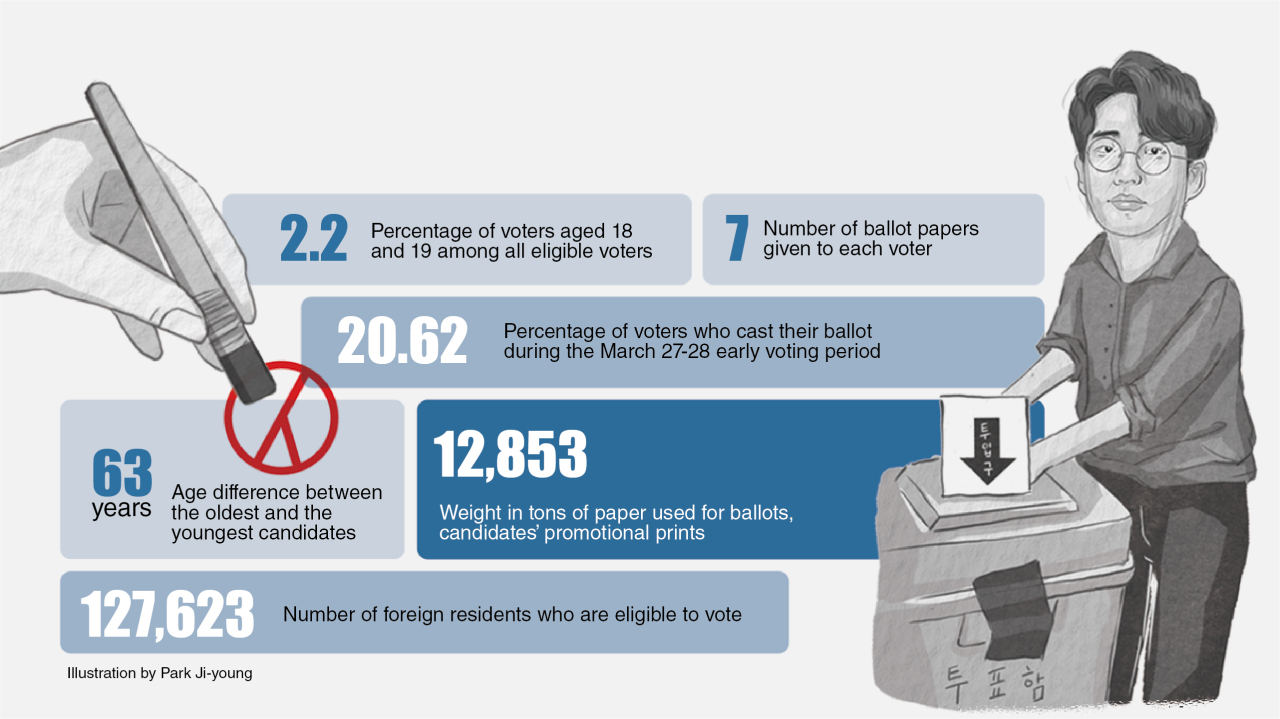 The 2022 local elections are upon us. Here’s a quick look at the vote by key numbers.

This is the first local election in which 18-year-olds can cast ballots. They already hit the polls during the presidential election in March after the voting age was lowered from 19 to 18 in late 2019.

In the June 1 elections, most voters will receive seven paper ballots at their polling station. In constituencies where parliamentary by-elections are taking place, voters will get eight paper ballots. Residents of Jeju and Sejong City will be given 5 and 4 paper ballots, respectively.

Voting will be carried out in two rounds. In the first round, voters will be given three ballots to pick an education superintendent, a metropolitan mayor or a provincial governor as well as a lower-level council head. The remaining four sheets of paper are for seats in provincial and metropolitan councils, and lower-level local councils.

More than 9.1 million people, or 20.62 percent of the eligible voting population, participated in the March 27-28 early voting period. This is the highest rate recorded in local elections since 2014, when advance voting was introduced in the country.

The local election in 2018 saw a total voter turnout of 60.2 percent, including 20.14 percent recorded for early voting.

Of the total 7,561 candidates running in the election, those under the age of 39 account for 9.5 percent. Although the percentage of younger candidates has increased slightly compared to the 2018 local elections (7 percent), it is still low compared to the proportion of people aged between 18 and 39 in the total population (28 percent).

The amount of paper used to print ballot papers and candidates’ campaign posters and flyers weighed a total of 12,853 metric tons. Given that it takes about 17 trees aged over 30 to make one ton of standard paper, this year‘s local elections comes at the cost of about 210,000 trees.

About 300 million ballot papers will be used in the local elections. If all of the papers were stacked it measure 3.3 times the height of Mount Everest.

If lined up, the papers would measure 54,000 kilometers, which is close to the distance it takes to circle the globe.

A total of 127,623 foreign residents will be eligible to vote, marking the largest number since foreign voters gained local election suffrage in 2006.

Of them, 99,969 are Chinese nationals, accounting for nearly 79 percent of the total, followed by Taiwanese, Japanese, Vietnamese and American.