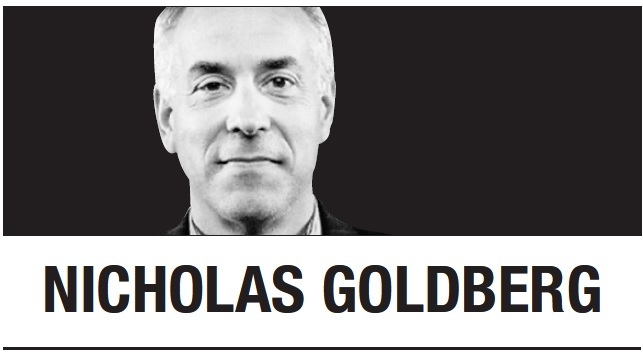 In the first half of the 20th century, Germany was aggressive, expansionist and dangerous. Its legacy includes millions of needless war deaths and the unspeakable crimes of the Nazi regime.

After 1945, however, the country changed. Chastened, defeated and shamed, Germany demilitarized at the insistence of the victorious Allies and soon adopted a constitution banning “wars of aggression.” Germans, to their credit, looked in the mirror, wrestled with their dark history and rejected violence as a tool of foreign policy going forward.

But now, eight decades later, the days of German anti-militarism may be drawing to an end. In the wake of Russia’s invasion of Ukraine, Germany seems ready to flex its muscles and rebuild its armed forces.

The country’s new chancellor has declared the Ukraine war a turning point -- a “Zeitenwende,” he called it. He has vowed to increase military spending immediately by more than $100 billion. Within two years, he promised, the country would be spending a full 2 percent of its gross domestic product on its military -- a target set some years ago by NATO that Germany has consistently failed to meet.

Meanwhile, a similar reappraisal has been underway in Japan, which is in the midst of a long argument with itself after eight decades of pacifism adopted after its World War II defeat.

There’s long been controversy in Japan over Article 9 of the national constitution, which bans war as a method of settling international disputes, renounces “belligerency” and limits the country to fighting only in self-defense. But in 2014 and 2015, when conservative Prime Minister Shinzo Abe was in power, the country “reinterpreted” Article 9 to expand the role of its military and allow it to fight in defense of its allies if they are attacked.

Today, the argument continues about how much to rearm and remilitarize.

To many people, all this rethinking is cause for celebration. Wouldn‘t it be great, the argument goes, if these two big, successful, democratic allies of the United States got fully back in the game, helping counterbalance the military strength of our mutual adversaries Russia and China?

But the way I see it, no one should celebrate militarization.

Maybe it is inevitable that Germany will reenter the ranks of offensively armed countries. Maybe its rearmament reflects a clear-eyed acknowledgement that the future of Europe is not going to be all peace dividends, cooperation and kumbaya.

And the same goes for Japan, living in the shadow of China and North Korea: Perhaps it is simply unrealistic to expect it to survive as a pacifist bastion in a rivalrous, power-driven world.

But still, it hardly seems like happy news that an experiment in beating swords into plowshares may be coming to an end.

At the very least it’s a depressing reminder that like Michael Corleone, even when you think you’re out, you get pulled back in.

Germany, like Japan, created a military force during the Cold War years. But like its Japanese counterpart, the Bundeswehr, as it was known, was designed as a defensive force, and it was not in the business of offensive combat. It participated in multilateral operations as part of NATO.

Then after the Soviet Union fell, it was reduced in size substantially. It cut its battle tank numbers from nearly 5,000 to 300 and reduced its troops from 500,000 to fewer than 200,000, according to the magazine Der Spiegel.

In recent years, Germany has been under pressure from the US and other allies to spend more on its military and to send troops to the conflicts in the Balkans, in Afghanistan and in the war against the Islamic State group.

In addition to increasing military spending, Germany agreed to provide Ukraine with lethal surface-to-air missiles, despite a long-standing policy of not delivering weapons to conflict areas.

Charles A. Kupchan, a professor of international affairs at Georgetown University, says the sources of German aggression that once made it so dangerous are gone. “Even Germany’s neighbors understand that Europe is a safer place with a strong Germany,” he says.

What’s more, he says, Germany’s engagement is necessary as we enter what could become Cold War 2.0 -- this time with an Eastern bloc that may consist not just of Russia but China as well.

Kupchan may be right. Great power rivalry and renewed bloc-based geopolitics may be the future, and Germany and Japan will get pulled back in.

But I, for one, am sorry that the long, hard-fought experiment in military restraint appears to be in retreat.