[Reporter’s Notebook] Disgruntled young men and their adulation for billionaires 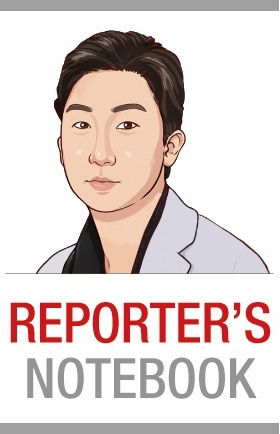 Working class heroes or underdog stories are a beloved topic in pop culture. Take John Lennon’s 1975 song “Working Class Hero” in which he sings “There’s room at the top they are telling you still.”

The next line goes, “But first you must learn how to smile as you kill.”

In the 2017 single “Mic Drop,“ BTS sings, “Who says my spoon is dirty” ”I don’t care, when I grab the mic, I have several gold spoons.” The lyrics reflect their underdog story -- being an artist at a lesser-known agency and becoming the biggest boy band in the world. Similar to the silver spoon expression in English, someone born with a gold spoon means they are born with privilege and wealth in Korea.

But on the internet as of late, many South Korean young men are singing a different tune.

If student activism, civil rights and labor movement characterized the political talk of the younger generation in the ‘80s, memes of outspoken billionaires now seem to be at the forefront of the debate in men’s online communities in recent years.


As for Musk, the richest person on the planet and a staunch supporter of cryptocurrency, he seems to have many connections to his fan base in South Korea, many of whom are young and interested in stock and digital coin investment.

Shinsegae Group Vice Chairman Chung Yong-jin is also among the billionaires with a big following. He is also the largest shareholder of the group’s supermarket chain E-mart, which operates Starbucks Korea and owns baseball team SK Wyverns, now renamed as SSG Landers.

But what makes Musk and Chung stand out among other billionaires are their outspokenness on social media. Their use of casual language helped foster a loyal following of supporters who would often come to their defense against the media, in a similar way to how fans of video games or K-pop stars react to negative press.

When Chung made headlines for using the hashtag “annihilate communism” on Instagram, his fans flooded the post with messages of support.

With the hashtag, the Shinsegae scion was protesting Instagram’s decision to remove one of his posts, which was later restored.

In March, Musk asked through a poll whether people think Twitter “rigorously adheres” to the principle that free speech is essential to a functioning democracy. The two have also criticized mainstream media for their coverage of themselves or current affairs.

On one hand, such talking points against the establishment make people almost feel that these billionaires are “one of them.” It appears that they resonate especially with young men who feel disenfranchised and face many social issues.

The unemployment rate of people aged 15 to 29 stood at 6.9 percent in February, government data showed. According to data from Statistics Korea, those aged below 39 accounted for 13.2 percent of homeowners in 2020.

On the other hand, it seems rather ironic that the messengers delivering anti-establishment messages are billionaires who were born into rich families.

It is worth nothing that these online billionaire fandoms come against the backdrop of growing discussions about meritocracy in South Korea.

President Moon Jae-in declared himself a feminist and introduced gender quotas for his Cabinet. In contrast, President-elect Yoon Suk-yeol has criticized feminism and rejected the quota. One of Yoon’s campaign slogans was “fairness and common sense.”

Many of his supporters, including young men, have welcomed Yoon’s victory as the “return of meritocracy.”

In the March 9 presidential election, over half of men in their 20s voted for the conservative Yoon, according to the KBS-MBC-SBS exit poll, who advocates lower taxes and has taken an anti-quota stance.

Through what many have described as a backlash vote, young men have expressed their dissatisfaction with the current administration on whatever the issue --- whether it is housing, the job market or feminism --- by voting for the opposition.

And after an election that has politically turned this country upside down, it seems measures intended to help marginalized groups such as quotas have become a taboo word, and outspoken billionaires are the heroes representing the disgruntled young men in online spaces.