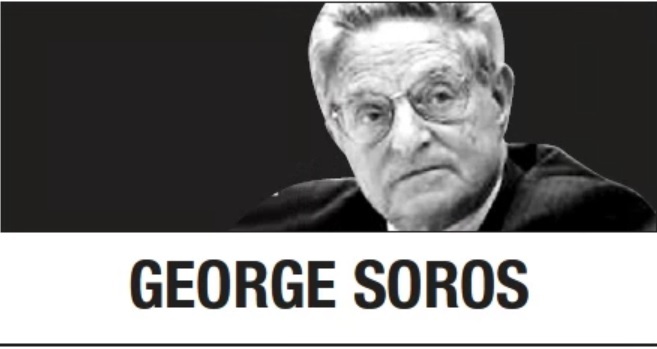 Russia’s invasion of Ukraine on Feb. 24 was the beginning of a third world war that has the potential to destroy our civilization. The invasion was preceded by a long meeting between Russian President Vladimir Putin and Chinese President Xi Jinping on Feb. 4 -- the beginning of the Chinese Lunar New Year celebrations and the Beijing Winter Olympics. At the end of that meeting, the two men released a 5,000-word, carefully drafted document announcing a close partnership between their two countries. The document is stronger than any treaty and must have required detailed negotiations in advance.

I was surprised that Xi appeared to have given Putin carte blanche to invade and wage war against Ukraine. He must be very confident that his confirmation as China’s ruler for life later this year will be a mere formality. Having concentrated all power in his own hands, Xi has carefully scripted the scenario by which he will be elevated to the level of Mao Zedong and Deng Xiaoping.

Having obtained Xi’s backing, Putin set about realizing his life’s dream with incredible brutality. Approaching the age of 70, Putin feels that if he is going to make his mark on Russian history, it is now or never. But his concept of Russia’s role in the world is warped. He seems to believe that the Russian people need a czar whom they can follow blindly. That is the direct opposite of a democratic society, and it is a vision that distorts the Russian “soul,” which is emotional to the point of sentimentality.

As a child, I had many encounters with Russian soldiers when they occupied Hungary in 1945. I learned that they would share their last piece of bread with you if you appealed to them. Later, at the beginning of the 1980s, I embarked on what I call my political philanthropy.

I don’t know Putin personally, but I have watched his rise very closely, aware of his ruthlessness. He reduced the capital of Chechnya, Grozny, to rubble, just as he is currently threatening to do to the capital of Ukraine, Kyiv.

Putin used to be a canny KGB operator, but he seems to have changed recently. Having developed an idee fixe, he appears to have lost touch with reality. He certainly misjudged the situation in Ukraine. He expected Russian-speaking Ukrainians to welcome Russian soldiers with open arms, but they turned out to be no different from the Ukrainian-speaking population. Ukrainians have put up an incredibly brave resistance against seemingly overwhelming odds.

In July 2021, Putin published a long essay arguing that Russians and Ukrainians are really one people, and that the Ukrainians have been misled by neo-Nazi agitators. The first part of his argument is not without some historical justification, given that Kyiv was the original seat of the Russian Orthodox Church. But in the second part, it was Putin who was misled. He ought to have known better. Many Ukrainians fought valiantly during the Euromaidan protests in 2014.

The events of 2014 made him very angry. But the Russian Army performed poorly when it was ordered to attack its Ukrainian brothers. Ingrained corruption in the awarding of defense contracts also has played an important role in its underperformance. Yet rather than blaming himself, Putin seems to have gone literally mad. He has decided to punish Ukraine for standing up to him, and he appears to be acting without any constraint. He is throwing the entire Russian Army into the battle and ignoring all the rules of war, not least by indiscriminately bombing the civilian population. Many hospitals have been hit, and the electrical grid supplying the Chernobyl nuclear power plant (currently occupied by Russian troops) has been damaged. In besieged Mariupol, 400,000 people have been without water and food for nearly a week.

Russia may well lose the war. The United States and the European Union are both sending defensive weapons to Ukraine, and there are efforts to buy Russian-made MiG fighters that Ukrainian pilots know how to fly. These could make all the difference. Regardless of the outcome, Putin has already worked wonders when it comes to strengthening the EU’s resolve and unity.

Meanwhile, Xi seems to have realized that Putin has gone rogue. On March 8, one day after Chinese Foreign Minister Wang Yi had insisted that the friendship between China and Russia remained “rock solid,” Xi called French President Emmanuel Macron and German Chancellor Olaf Scholz to say that he supported their peacemaking efforts. He wanted maximum restraint in the war in order to avert a humanitarian crisis.

It is far from certain that Putin will accede to Xi’s wishes. We can only hope that Putin and Xi will be removed from power before they can destroy our civilization.


George Soros- - -
George Soros is a founder and chair of the Open Society Foundations. -- Ed.