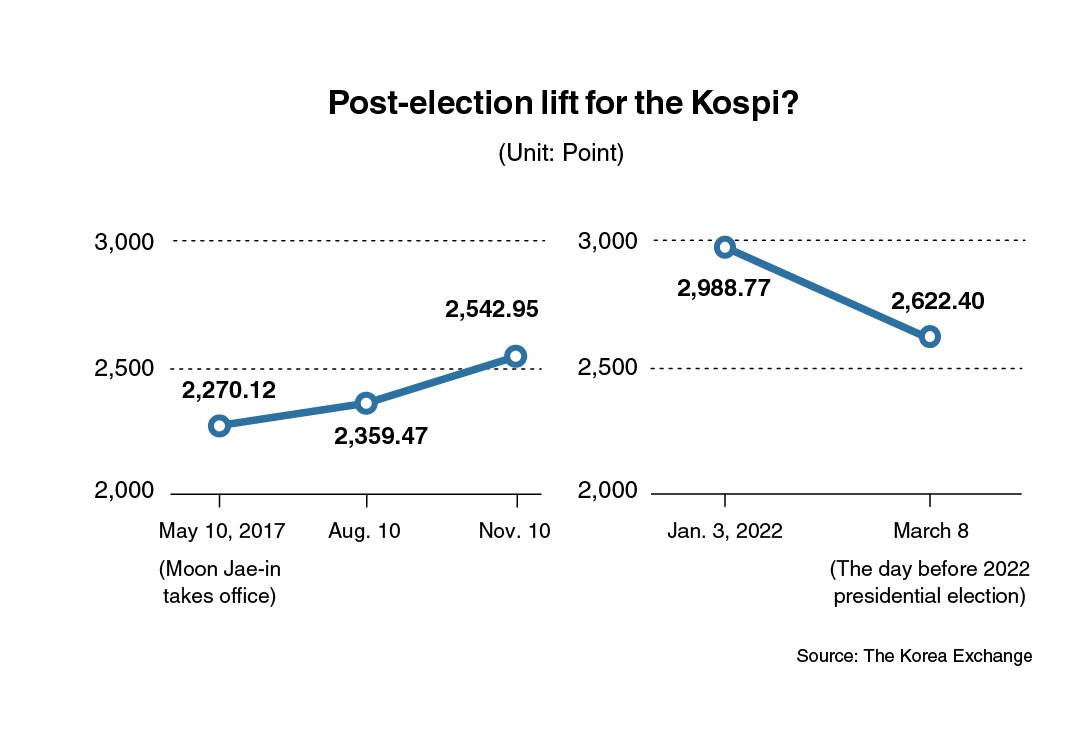 Markets in South Korea enjoyed short-term post-election rallies in past presidential elections, but a similar uptick looks unlikely this time, mainly because of the war in Ukraine, but also because campaign pledges have offered little to buoy investors.

This would be a return to form for the democratic era.

In the six months after current President Moon Jae-in was sworn in, the Kospi rose 11.2 percent to 2,542.95. But the previous four presidents going back as far as the Kim Dae-jung government that began work in 1997 all saw the Kospi decline in their first six months in office.

“Aside from inconclusive data, stocks are driven by exports, earnings, and inflation -- or monetary policies that affect the rising prices,” said Jeong Yong-teak, chief economist at IBK Securities. “It’s war-led inflation woes and a rate hike by the US Federal Reserve we need to take into account.”

Campaign pledges, Jeong added, have had little impact on the market this year, as the two main candidates’ plans did not include drastic changes for businesses or deregulatory moves that would buoy market expectations.

The familiar chaebol reform pledges disappeared, and the two even shared a similar agenda, which left little room for heavy market swings to take place during the campaign and probably following the election, according to Jeong.

Under the plan brought by the Moon administration, a tax of up to 25 percent will be imposed on annual capital gains exceeding 50 million won ($40,500), starting in 2023.

They also assured retail investors of a more transparent capital market, where financial wrongdoing against minority shareholders would be punished. However, neither presented concrete plans to do so.

Meanwhile, the election was held at a time when the market has been falling from its peak of 3,305.21 on July 6.

The Kospi, which started off the year at 2,988.77, dropped further to 2,622.40 Tuesday, down for the third straight day. Foreign selling led to the dip, as geopolitical unrest pushed up global oil, gas, and wheat prices.

The mainboard has already seen earnings reduced over a potential rate hike by the US Federal Reserve, but the jumpy market had more to do with inflation worries drawn out by little progress on peace talks over the Russia-Ukraine crisis, experts said

“The rate hike is already factored in. It’s the rising commodity prices that are dragging down the index. Inflation means slow global economic growth, which is bad for export-driven countries like us,” said Seo Sang-young, an analyst at Mirae Asset Securities.

Investors are hedging against the losses or potentially disappointing earnings and their return hinges on easing inflation fears, Seo added, referring to deepening Western sanctions against Russia over Ukraine amid supply shortage concerns.

Russia warned that a Western ban on Russian oil imports could double the price of oil and shut down Moscow’s main gas pipeline to Germany. Russia is the world’s second-biggest oil producer behind the US, and supplies Europe with about 35 percent of the natural gas it needs.

Russia, also the world’s largest producer of fertilizers, coal, steel, nickel, and palladium, said it could also suspend its fertilizer exports. The crisis is putting a strain on global wheat supplies as well. Russia and Ukraine account for about 29 percent of global wheat exports.

“There is little that could be done inside to prop up a sliding Kospi,” Hwang said, dismissing the possibility that the index could pick up upward momentum in a post-election rally. A resolution to the Ukraine conflict offers a way out and without it, the Kospi could reach this year’s record low, Hwang added.