[Minxin Pei] Whether it sides with Russia or not, China will pay a price 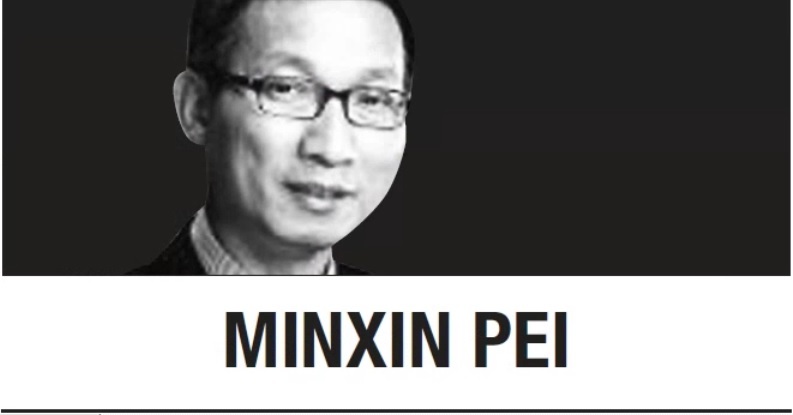 Until Russian President Vladimir Putin invaded Ukraine last week, the standoff between Russia and a US-led Western alliance had produced, on balance, a net strategic benefit for China. Now that Putin has pulled the trigger, the geopolitical game has completely changed.

The months of tension had distracted the US from China, which Washington sees as its most formidable long-term threat. And looking ahead, Putin’s full tilt toward China, driven by his grievances against the West, would significantly improve Chinese security by expanding the country’s access to advanced weaponry and energy resources.

The optimal situation for China would have been prolonged tensions short of war, because such an ambiguous situation allowed China to avoid taking a firm stand while maintaining friendly ties with some of the key stakeholders -- Russia, the European Union and also Ukraine, which had been a major supplier of grains to China.

To be sure, even though war has broken out, China may still end up gaining some geopolitical benefits. In the short term, the US will be forced to focus on confronting Russia and devote less energy to implement its newly announced Indo-Pacific Strategy. In the event of a quick Russian military victory, the US would find itself fighting a new Cold War on two fronts.

However, any benefits for China could be outweighed by the costs of being seen as Russia’s supporter. And China, like the rest of the world, will face inevitable economic and geopolitical fallout, including from Western sanctions against Russia and a spike in energy prices.

In the short term, the war in Ukraine could not have come at a worse time for President Xi Jinping. His top priority this year is to hold a trouble-free national congress of the ruling Chinese Communist Party that will grant him a third five-year term. For this, he needs all the good news he can get. Dealing with the worst geopolitical crisis since the end of the Cold War will undoubtedly distract Xi from managing China’s internal challenges.

These short-term inconveniences pale in comparison with potential long-term risks and costs if China fails to strike a delicate balance between supporting Russia, its strategic partner of convenience, and preventing ties with the West from collapsing completely.

Aside from discrediting its long-held principle of inviolable sovereignty and territorial integrity of nations, China’s support for Russia in the coming years could incur huge costs.

As the world’s second-largest economy, with more than $3 trillion in hard currency reserves, China has the capacity to help Russia soften the blow of Western sanctions. But Xi faces a real quandary: If he helps his friend Putin, he will endanger China’s commercial ties with the West. If he doesn’t help, Putin’s debacle in Ukraine could further encourage Washington to bolster its support for Taiwan -- the issue that concerns China the most -- and embolden the pro-independence forces on the island. However unwelcome Putin’s war in Ukraine may be for Xi, a Russian defeat would be China’s worst nightmare.

But providing substantial financing and technology to Russia would probably trigger secondary sanctions against Chinese entities, such as banks and technology companies. Although China has crafted long-term plans to make its economy more self-reliant and resilient, it is still too dependent on Western markets. Sales to the US and the EU, worth more than $1 trillion in 2021, account for roughly one-third of total Chinese exports. China is especially vulnerable to Western restrictions on semiconductors: It imported $432 billion worth in 2021. Chinese leaders would have to weigh how far they are willing to go to help Russia without jeopardizing their own economic interests.

Even more worrying to China would be a more united Western alliance. China’s long-term strategy to compete with the US rests on the critical assumption that America’s European allies will stay neutral in the US-China rivalry. But Western solidarity in responding to Russia’s invasion of Ukraine has called this assumption into question. If anything, the EU will from now on move closer to the US on China-related issues because its members are now more beholden to the US and have a greater appreciation of American power in maintaining peace and security in Europe. European countries may force Beijing to pay a price for its new strategic alignment with Russia.

The inevitable fallout of the solidifying Western alliance for China is accelerated economic decoupling. Rising opposition to globalization, the US-China trade war, and the pandemic have already persuaded many in the West to relocate China-based supply chains. Russia’s invasion of Ukraine will only speed up implementation.

Before Putin ordered Russian troops into Ukraine, China’s strategy was to play the long game in its rivalry with the US, under the assumption that the current international order would allow it to gain strength over time and tilt the balance of power in its favor.

Now that Ukraine is engulfed in war, we will see whether China can avoid becoming collateral damage itself.


Minxin Pei
Minxin Pei is professor of government at Claremont McKenna College. He wrote this for the Los Angeles Times. -- Ed.