[Newsmaker] After being called feminists, these women faced online harassment

By Yim Hyun-su
Published : Feb 11, 2022 - 12:57       Updated : Feb 11, 2022 - 16:34
The death of livestreamer Jammi, whose real name is Cho Jang-mi, made headlines this week in South Korea. It emerged that she took her own life after “suffering severe depression over malicious online comments and rumors,” according to an online post written by one of her family members.

The 27-year-old who used to stream on YouTube and Twitch was accused of being a radical feminist in 2019.

The accusations began after she used a pinching hand sign that some claimed to be misandrist. They say that the hand gesture, thought up by radical feminists, is used to mock the size of male genitalia. Last year, many South Korean companies were forced to apologize after some took issue with the hand sign found in advertising materials.

Jammi was not the only one. Many other women have been targets of online harassment, mostly from male users, for being associated with feminism.

In October, Jun Hyo-seong, a former member of K-pop girl group Secret, teamed up with the Ministry of Gender Equality and Family for a campaign to raise awareness on dating violence.

Her remarks were soon met with anger from members of online male communities who felt “betrayed” as her fans. Their criticism goes that she was jumping on the bandwagon of feminism after capitalizing on her sex appeal as a K-pop idol.

The backlash spilled over onto the street. In November, “New Man On Solidarity” -- a prominent right-leaning anti-feminist group who claims they are not misogynists -- took to the streets of Hongdae, a neighborhood popular among young people, to denounce feminism and called on politicians to abolish the Gender Equality Ministry.

During the protest, a poster depicting Jun wearing a maid costume appeared with the caption, “You can’t get the femi coin, sister.”

Images of Irene’s photos being burned or cut were uploaded online amid the controversy.

“When the target is branded as someone vulnerable who cannot protect themselves, they are more prone to attacks from male dominant online communities,” said culture critic Sohn Hee-jeong.

“They feel they have the right to attack because they have spent so much money and attention and they almost feel betrayed.”

Visiting professor Lee Jong-im in graduate studies in journalism and communication at Kyung Hee University said while it is already hard for celebrities to comment on politics and social issues in South Korea, it is even harder for idols.

“Idols are expected to stick to this made-up image of pureness. When gender conflict is thrown into the mix, talking about their stories or values go beyond the realm of idols the public expect them to stay in,” Lee said.

Professor Lee said the expectations placed on female idols and streamers by men are “narrow.”

“In 2016, a voice actor for online video game Closers was fired for uploading a picture of herself wearing a T-shirt that said ‘Girls Do Not Need a Prince’ after facing strong backlash from male users. 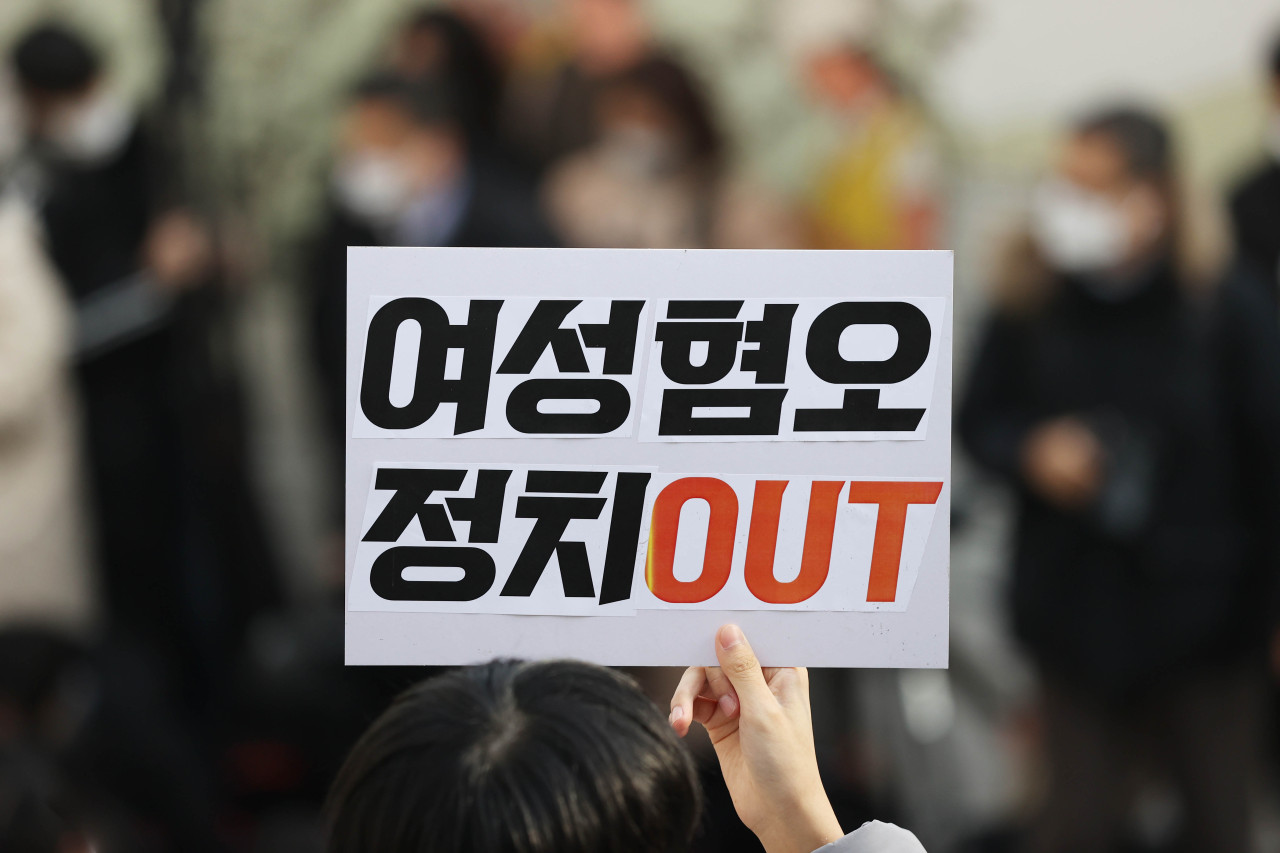 "Misogynist politics OUT,“ a banner held by a group of pro-feminist male protesters known as Ordinary Men Who Take Action reads during a protest on Wednesday. (Yonhap)
“Making comments and criticisms that border on hate did not invite counter criticism. Instead, (the users) saw their demands as consumers being accepted, giving weight to the attacks against women.”

One in 2 men in their 20s in South Korea tends to be anti-feminist, according to a 2018 study released by the Korean Women’s Development Institute, a government think tank. In the same survey, only 1 in 4 young men saw women as “weaker than men” or needing protection.

But such strong antagonism against feminism has puzzled many looking from the outside at a country that has the highest gender wage gap among OECD countries.

Women also feel less safe than men in the country, according to a 2021 report from the Gender Equality Ministry. Only 21.6 percent of women said they felt safe from crime, as opposed to 32.1 percent of men.

So why is feminism so hated in a country that seems to need it?

Anti-feminism sentiment is nothing new. But it appears to have emboldened in recent years as platforms and web portals are letting people capitalize on hate and outrage, said Sohn, the culture critic.

“We need to look at how there is a market for hate toward not just women but minorities on platforms like YouTube where you can get attention and earn money -- it’s a market of hate,” she said.

“The more provocative the content is, the more attention and money you are rewarded with.”

On YouTube, creators can make a profit by monetizing their videos to show Google-placed ads. In such videos, female celebrities are disproportionately targeted, she explained.

In a recent interview with The Korea Herald, Rep. Jang Hye-young of the Justice Party said backlash against feminism surged in recent years in Korea as discussions over women’s safety and feminism grew.

“Though there is widespread support for the idea that gender discrimination, the gender pay gap and violence against women need to stop, feminists have earned this label as a group of extremists, something to be disliked along the process,” Jang said.

The feminist movement has made some major advances including the Constitutional Court’s ruling to overturn a ban on abortion.

But politicians who take advantage of the anti-feminism sentiment are exacerbating the situation, said Sohn.

“Lee Jun-seok, head of the People Power Party, played a major role (in drumming up anti-feminism sentiment). He is spearheading the voices and politicizing them. The People Power Party is adopting tactics straight out of Trump’s playbook during the 2016 US election.

“Just like how Trump hammered CNN as the ‘Clinton News Network’ and refused to do interviews with them, candidate Yoon refused to take part in a TV debate on JTBC citing the network’s bias. Just like Trump, the PPP is also tapping into anti-China sentiment. It is the same story with misogyny.”

Yoon Suk-yeol, the PPP’s presidential candidate who is leading in the polls with the election less than one month away, has promised to abolish the Gender Equality Ministry. The conservative candidate has also said that “structural gender discrimination no longer exists,” echoing one of the anti-feminist slogans online.

Yoon’s rhetoric marks a stark shift from five years ago when President Moon Jae-in was sworn into office in 2017. One of his campaign promises was to become a “feminist president.”

“If you consider where gender equality stands in South Korea, it would be more accurate to say we need a new Gender Equality Ministry.”

As the country has entered a period of low growth, one of the remaining growth engines is gender equality -- to allow women employees to work to their full potential and exercise their economic power. Not only would it improve individual human rights but it would also help with South Korea’s economic growth, the lawmaker explained.

“For politicians in responsible positions to say they would abolish the Gender Equality Ministry to pander to certain groups, when gender equality is a highly important agenda item, is extremely irresponsible,” Jang said.