[Peter Jensen] How to save democracy - elect fewer jerks 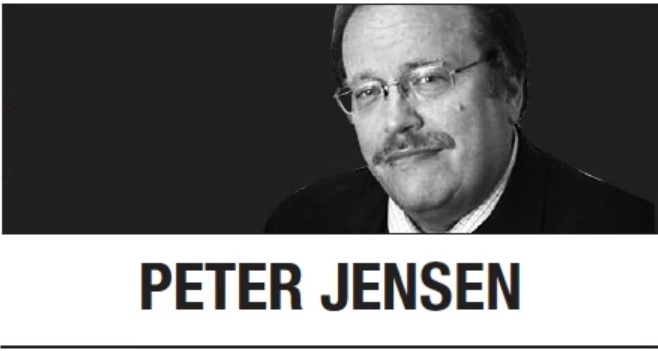 Having recently completed my 40th year as a card-carrying journalist, I feel compelled to share the one small nugget of wisdom I have gleaned from all those misspent hours hanging out with mayors, governors, legislators and other ne’er-do-wells of elected office. They are not all the same. This will shock some of you, I know, but like other human beings, they range from truly nice people to miserable jerks. This is not a matter of political viewpoint, age or gender. Awful people come in all shapes and sizes and party affiliations.

But here’s the question: Can you spot them?

I ask this because the 2022 primary elections are fast approaching, and I worry that average people, those who are not stuck in late-night government budget briefings or hanging out in the corridors of the US Capitol (without shaman gear, of course) or texting back and forth with county council members, can’t easily tell the difference. How much does any voter spend pondering the qualifications of any candidate? Alas, awareness of party affiliation or even policy platforms doesn’t quite cut it. How will a potential officeholder deal with a crisis? Is he or she willing to compromise? Can they work well with others? Are they open-minded or willing to be educated? Such attributes aren’t readily apparent, yet they seem more valuable than ever in these volatile, highly partisan and democracy-imperiling times.

Journalists haven’t made this easy. In attempting to be evenhanded, my colleagues and I are loath to highlight decency -- at least not directly. And these are subtle qualities. Think of good person versus complete jerk as a continuum.

But I know good people when I see them. Take, for example, US Rep. Jamie Raskin, a Democrat who represents Maryland’s 8th Congressional District. I have known him since his days in the Maryland General Assembly serving as a state senator from Montgomery County. He is smart, knowledgeable and patient -- even with those who do not agree with him.

In recent years, the 59-year-old former constitutional law professor has gained national attention for serving as lead manager in the second impeachment trial of President Donald Trump and for his service on the House select committee investigating the Jan. 6 insurrection. He has also written a memoir, “Unthinkable: Trauma, Truth, and the Trials of American Democracy,” that explores both that insurrection and the loss of his beloved son Tommy, a 25-year-old law student who took his life just one week earlier. His willingness to write candidly and thoughtfully of his personal injury and the harm done by the Capitol violence demonstrate he is no partisan attack dog but a grieving father with a deep streak of humanity.

Yet given that reporters don’t write articles that begin, “Congressman Raskin, a good guy ... ” and most candidates haven’t produced bestselling memoirs, how is the average voter to tell the difference between partisan hack and well-informed and capable leader? As it happens, one needs only make the effort to read between the lines. Allow me to put those four decades of experience in this area to work on your behalf. Ask yourself these five questions:

1. Does this individual constantly say outrageous things? As satisfying as it may be to hear an opponent described as a criminal or doddering fool, candidates who only trade in heated barbs are the political equivalent of abusers. This kind of play-to-the-crowds shallowness will garner headlines, but it won’t lead to getting anything of consequence done whether in the county courthouse or on Capitol Hill.

2. Is the person curious about the world around them? Instead of exploring new ways to call people bad names, decent people invest themselves in complicated issues and reporters usually flock to them to understand exactly what’s going on. Next time you meet a candidate, try asking him or her about some subject matter you already know well. Set your BS detector to maximum.

3. Do they appear frequently on partisan media sucking up to hosts? As entertaining as it was to watch Sen. Ted Cruz grovel to Fox News’ Tucker Carlson last month to show regret for calling domestic terrorists domestic terrorists, this is a really telling sign of jerkiness. Avoid such people.

4. Do they espouse political talking points even when it’s not clear they understand what they mean? Critical race theory is the most recent example. A lot of people absolutely condemn it without even an inkling of understanding of what systemic racism might be and whether K-12 educators seek to indoctrinate students in it (they don’t, by the way).

5. Are they sought out by reporters? This is not a perfect barometer. People in high places will always be quoted in news coverage of important issues, but when the individual is not in leadership and perhaps not even a member of the political party in power and is still quoted, it’s a sign that reporters trust that person’s honesty and sincerity, two attributes rarely found in complete jerks.