What millennials and Gen Z want is a set of rules that ensure fair competitions in everyday life, not grand policies to make the world a better place, Oxopolitics CEO says


Transparent and unbiased data will help potential voters and politicians make rational choices, putting an end to the era of heavily skewed public polls and knee-jerk policy reactions. This is the guiding philosophy at Oxopolitics, where scores of data engineers are working to change political decision making with the power of data.

“I wanted to build an open data platform that enables each user to have their say about politics and see the data on themselves, like-minded people and also people with conflicting ideas,” Ryu Ho-hyon, Oxopolitics CEO and founder, said in an interview with The Korea Herald. “Ultimately let them make decisions based on accumulated data of their own, not by opinion of others.”

Founded by Ryu and his younger brother in 2020, Oxopolitics garnered 100,000 subscribers with 20 employees as of January.

With seven years of experience in Silicon Valley as a data engineer at Twitter and Airbnb under his belt, Ryu was struck with the idea of applying a data-driven decision making process for political matters.

“Rational decisions were made based on data at these companies, without relying on authority or superiors, which led me into thinking of implementing the system to those making the most important decisions in Korea – politics,” Ryu said.

Voters here have been easily swayed by the social climate, and the swordplay of politicians and biased opinion polls, the 41 year-old CEO added.

The startup chief said information technology could give the public two types of power. One is the power of communication which was brought to people by social network services like Facebook and Twitter, which functioned as a catalyst to hasten the Tunisian Revolution and the Arab Spring.

The other is the power of data, which is currently seized by big tech firms and those who may attempt to mislead voters by distorting public opinion survey.

“Why do we let Google and Facebook to rake in money with the data we created? Why do we leave the political circle to use data to modify results as they like?” 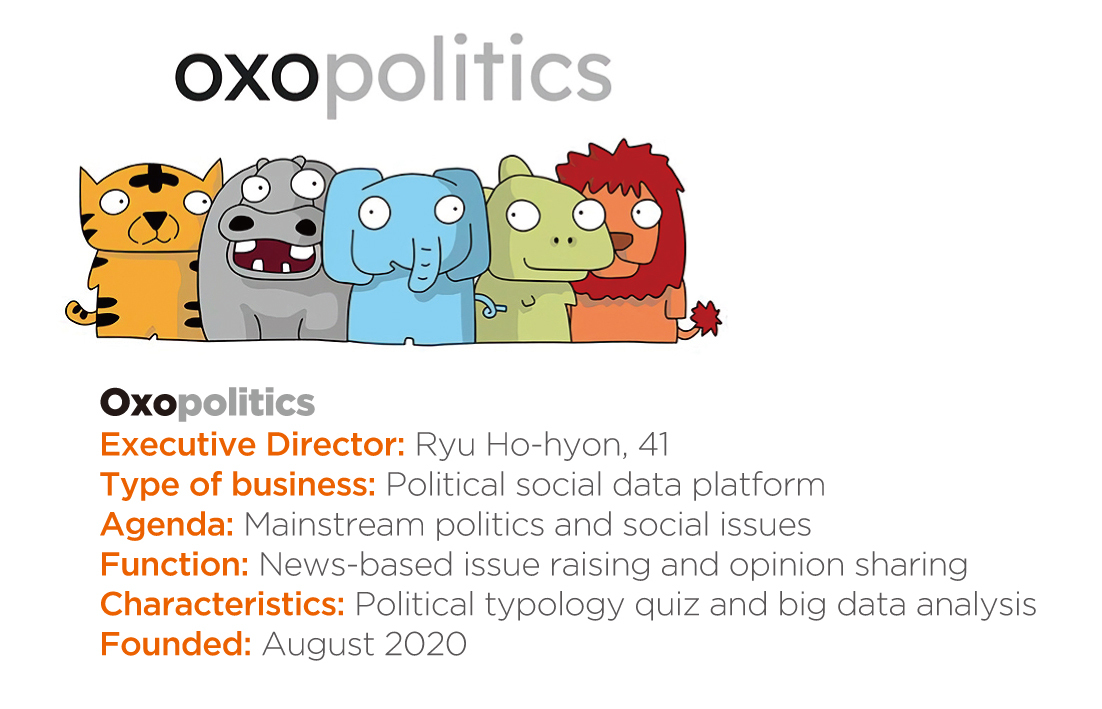 Ryu came up with the company name Oxopolitics because of the platform’s key characteristics of asking “for or against” questions, which is often called ”OX quiz“ in Korea.

The site requires a first time visitor to take a political tendency test consisting of 10 questions. There are three options for the answers -- agree, disagree or neither agree nor disagree.

It then shows which political tribe the user belongs to among five typology groups – Tiger, Hippo, Elephant, Dinosaur or Lion -- depending on his or her test results. It reflects one’s preferred ideologies of progressive and conservative, as well as growth and distribution.

“Korean people love personality tests, and there’s a great demand for an online community specialized in politics. The combination of the two worked quite well to attract visitors,” Oxopolitics COO and co-founder Ryu Chan-hyun said in the interview alongside CEO Ryu Ho-hyon.

The CEO said large portals in the country like Naver and Daum and major news outlets are all biased. Online forum sites discussing political issues have turned into echo chambers where people’s preconceived ideas get intensified by repetition, while alternative opinions are eschewed.

“Oxopolitics is a collection of various echo chambers ranging from far left to far right. We allow users to see what other political tribes say about political issues in transparent ways.”

Data visualization is a part of this effort. The firm adopted it for users to grasp the political landscape at a glance. For every question given to users on a daily basis, the site offers viewers pie and bar charts to show the opinion of each tribe, age and gender group.

Although the site attracted a large number of people in a relatively short period of time, there is a big gender gap among users.

Among total active users, women account for only 9 percent, while men in their teens, 20s and 30s account for 83 percent.

“We will throw more questions related to women to draw their attention or improve our user experience for female users,” the COO said.


What do young voters say?

So far, Korean politics have been a tussle between older generations of industrialization and democratization. But now the country has become a developed country by achieving a sufficient level of democratization and economic development. The debates between the two sides are no longer appealing to young voters.

“Their primary concern and focus is whether the rules of the game they play in their lives are fair,” he said.

This is because young voters are given a small window of opportunity to satisfy their needs, such as those involving career and marriage. The country no longer yields economic growth as it previously did with limited resources.

More stragglers appear as everyone is running towards one goal in this standardized and uniformed society, he said.

“Young people have a great need for changes in the social structure so that no one would take any opportunities away from them by gaining advantage unfairly.”

In a diverse society, conflicts of interest arise as a main issue, as each individual wants to do something different.

“Politics in developed countries should become a platform for resolving such conflicts of interest,” he said. “And there will be a growing need for data of individual opinion. This is the data that Oxopolitics holds.”