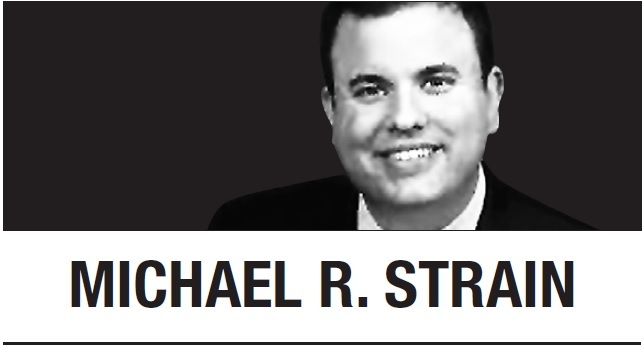 Since the COVID-19 pandemic started in 2020 and the federal government began using extraordinary measures to support workers, households and businesses, Republicans have been concerned that expanding the eligibility and generosity of unemployment benefits could slow the recovery and keep workers on the sidelines.

So why have a handful of Republican-led states now extended unemployment benefits to workers who have lost their jobs because of failing to comply with vaccine mandates, with other states considering following suit?

The answer is that some Republican politicians place fighting the culture war ahead of sound economic policy, traditional conservative principles and the best interests of their own constituents. The result will be to keep more workers on the sidelines in Arkansas, Florida, Iowa, Kansas and Tennessee at a time when labor shortages are hurting the ability of many businesses to function and are contributing to record-setting inflation -- all while lengthening the duration of the pandemic.

State officials cited precisely these concerns when they stopped participating in a federal program that made unemployment benefits more generous.

It seems they may have been right -- states that reduced the generosity of unemployment benefits last summer saw relatively more unemployed workers find jobs. But these states were expanding unemployment compensation with one hand while restricting it with the other, creating a new category of eligibility restricted to the unvaccinated while cutting the size of the payments and telling gig workers that they are no longer allowed to receive benefits.

Jobless benefits are a social insurance program. Employers pay into the system on behalf of workers, who ultimately bear the cost of those premiums in the form of lower wages. Workers who have lost a job through no fault of their own -- for example, a mass layoff due to an economic downturn -- and who are actively looking for work are eligible to collect benefits. Workers who are fired for cause or who voluntarily quit can’t receive benefits, just as someone who intentionally burns down his house can’t collect on his homeowner’s insurance policy.

The economic nationalism and conservative populism that are coursing through the political right indulge a narrative of grievance and victimization. But these laid-off workers are not victims. They are adults making choices about their work environment, and they should bear the responsibility for those choices, including loss of income while searching for another job.

Conservatism prizes economic liberty and argues that employers should be given broad latitude to set corporate policy, and that the terms of employment relationships should be respected. These relationships are entered into by workers and firms voluntarily, and presumably would not exist if the arrangement didn’t make both parties better off.

This has been a traditional argument against high federal minimum wages. If I am willing to be compensated at $12 per hour and a business is willing to pay me that wage, then why should the government step in and judge that $12 is too little?

The same logic applies to vaccine mandates. It should be fine for employers to require their employees to be vaccinated, and fine for people to choose whether to work for employers with vaccine mandates. There is no good reason that workers who would rather not be vaccinated should receive compensation for choosing to act upon that preference. Conservatives should remember that that compensation comes from tax revenue -- i.e., it is other people’s money.

Further complicating this situation are consumer prices, which are rising at a pace faster than they have in four decades. These Republican-led states are keeping more workers on the sidelines, which is making it harder for businesses to find workers, pushing up nominal wages and putting upward pressure on consumer prices. Fighting vaccine mandates should take a back seat to getting workers into jobs and keeping price increases in check.

The many reasons to oppose extending unemployment benefits to people who have lost their jobs over vaccine mandates include a faster end to the pandemic, increasing employment, prizing the value of personal responsibility and advancing economic liberty, fiscal responsibility and limited government.

The reasons to support this policy? None that are compelling.