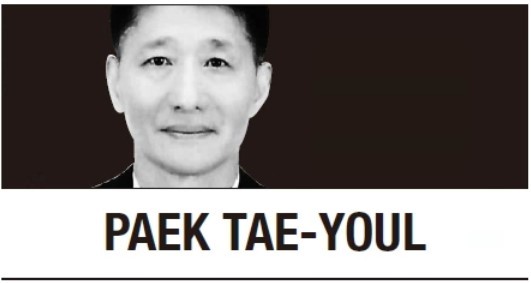 President Moon Jae-in of South Korea proposed an end-of-war declaration for the first time in April 2018. Since then he has occasionally mentioned the idea and most recently, raised the issue again in his speech at the 76th session of the UN General Assembly on Sept. 21, 2021. A part of his speech regarding the declaration is as follows:

Why, then, does President Moon advocate this declaration so ardently? What is his true intention? He is known as a progressive leader who puts priority on inter-Korean relations. In my opinion, because the end-of-war declaration presupposes the advent of peace on the peninsula, there will be no need for the US-South Korea security treaty and American military presence on South Korean soil.

Given the unfavorable situation, where the issue of North Korea’s nuclear weapons and missile program still remain unsolved, and the tension between the two Koreas is fairly high, President Moon strongly sticks to an end-of-war declaration, and will continue to do so until the end of his term in May 2022.

From his remarks, a couple of things are worth mentioning. First of all, he stresses too much the importance of a framework where the end-of-war declaration comes first and peace later. But his desire that this declaration will automatically bring peace on the peninsula was overly optimistic and even naive.

Second, it lacks a set of specific actions to make it work. Whatever it is, his goal seems solid and strong. Essentially the end-of-war declaration itself looks plausible at least on the surface, but many issues surrounding the Korean Peninsula need to be settled first.

Eventually, it would be highly likely to create a serious security vacuum in which South Korea is militarily defenseless, or can be easily attacked by North Korea. Furthermore, it is nothing but an intentional attempt to sever US influence over South Korea and the peninsula.

From President Moon’s perspective, the US has always been a major hurdle to the peace and unification of the peninsula, and will be for good. Therefore, he finds it absolutely necessary for Washington not to interfere in any kind of political and military actions and issues in both Koreas.

Considering that North Korea has cheated or violated a variety of bilateral agreements so many times over the last several decades, I deeply doubt that Pyongyang will faithfully implement an end-of war declaration with interested parties. An end-of-war declaration will bring only “confrontation and crisis,” rather than “reconciliation and cooperation.” Political conditions surrounding the Korean Peninsula are not stable or favorable enough for initiating an end to the Korean War.

To carry out the declaration successfully, there should be some preconditions. First of all, North Korea should sincerely undergo all nuclear-related monitoring and inspections, and other guidelines provided by the IAEA on a regular basis.

Second, both Koreas must build mutual trust by expanding exchange and cooperation in almost every field. I am sure that this effort will eventually pave the way for making peace between the two antagonistic parties and hopefully reunification.

Third, China should faithfully follow all the resolutions adopted by the UN with regard to North Korea’s nuclear programs and continue to strongly persuade Pyongyang to give up its nuclear weapons. The communist giant should play a meaningful role to thwart the North’s vain dreams. I would like to remind China sincerely and respectfully that it is “a permanent member of UN Security Council.” Obviously, China should do something about tackling the North Korea issue.

A declaration to end the Korean War should be an act that naturally emerges from the establishment of peace over a long period of time, and the declaration itself cannot guarantee peace on the peninsula. It should not be an improvised political gesture or rhetoric. Rather, it should be a framework based on a legal consensus and by which all the parties concerned faithfully comply with their respective obligations and roles.