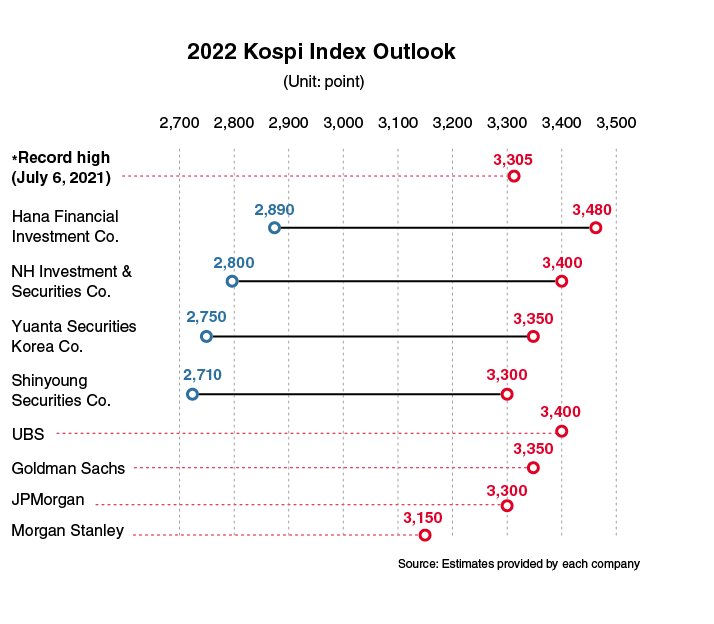 South Korean shares could recede early next year but will gradually pick up speed in robust rebound on upbeat corporate earnings and consumer sentiment, while the home price rise will slow but with room for a moderate hike, market experts here said.

The benchmark Kospi -- which hit a record high on July 6 this year at 3,305 amid ample liquidity and pandemic recovery hopes -- could reach as high as 3,480 next year, though it could also dive down as low as 2,710, according to analysts citing supply disruptions as the main concern.

“In the first half of 2022, we will see supply shortages easing and inflation falling. Producer prices will stabilize followed by consumer prices. That all means emerging markets could outperform their advanced peers,” said Kim Seung-hyun, head of research at Yuanta Securities Korea.

Korea will see chip shares leading the rebound expected in the latter half of 2022, Kim added.


Rebound in one way or another

Seo Cheol-soo, head of research at Mirae Asset Securities, said the country would still reel from supply shortages in a way, but the worst is over. Soaring demand for chipmakers like Samsung, the world’s top memory chipmaker, will prop up the market rebound in late 2022.

But other analysts suggested a trajectory starting with a rebound and ending in a downturn, saying the upward momentum would phase out as the year runs out.

“Strong exports, led by chips and autos, will push the stock to its peak in around May next year, but the market would be left more vulnerable to outside changes as the US Fed cuts market support in June and eyes a rate hike later,” said Oh Tae-dong, head of research at NH Investment & Securities.

Hwang Seung-taek, head of research at Hana Financial Investment, said export volumes drive up corporate earnings, essential for a market rally, but the volumes were not as impressive as the total export prices this year for Korea.

In December, the government said it is expected to surpass $640 billion in total outbound shipments, the highest since the Trade Ministry began to collect data in 1956.

“The price jumped while the volume, which matters more, did not. That’ll be the case for next year this time around as well, meaning a slowdown in export volumes, which translates into weak corporate earnings in late 2022,” Hwang said.

A market rebound would precede the slowdown, Hwang added, referring to a surge in revenues by US trucking industries late this year as a sign of easing supply bottlenecks triggering the hike.

Meanwhile, analysts all agreed that Korea’s recent push to join the ranks of developed countries in MSCI’s equity indexes would hardly affect the local market in near future, since it usually takes years to see outside capital flowing into Asia’s fourth largest economy, which is recognized as an emerging market.

Analysts described moving up the ladder as matching Korea’s growing economic influence but some said the government should also factor into an investment cycle, which does not always favor the advanced countries.

“In the 1980s, emerging markets had a better run than developed markets. In the 1990s, it was advanced countries. That cycle comes and goes and I see Korea gaining just as much by being an emerging market leader,” said Kim Hak-kyun, head of research at Shinyoung Securities.

But analysts said the recent rush by local firms to get listed on the Nasdaq could work to the advantage of the local market – though to varying degrees. Yanolja, a travel and leisure firm, and Dunamu, operator of Korea’s largest cryptocurrency exchange Upbit, reportedly mulled an overseas listing.

“The more South Korean firms get appraised, and hopefully, get priced right overseas, the better it is for local firms running similar businesses here to get their valuations right on the Kospi or Kosdaq market,” said Oh Tae-dong, head of research at NH Investment & Securities.

Korean stocks have long been undervalued and a valuation by a more independent, mature party could provide an antidote, according to Oh. But he admitted the change in perception would take place slowly.

Since President Moon took office in May 2017, the average price of a 84-square-meter apartment in Seoul -- the most common option -- has jumped 92 percent. The Moon government, which has tried heavier taxes and loan curbs to stabilize prices, is accused of “politicizing” the market. 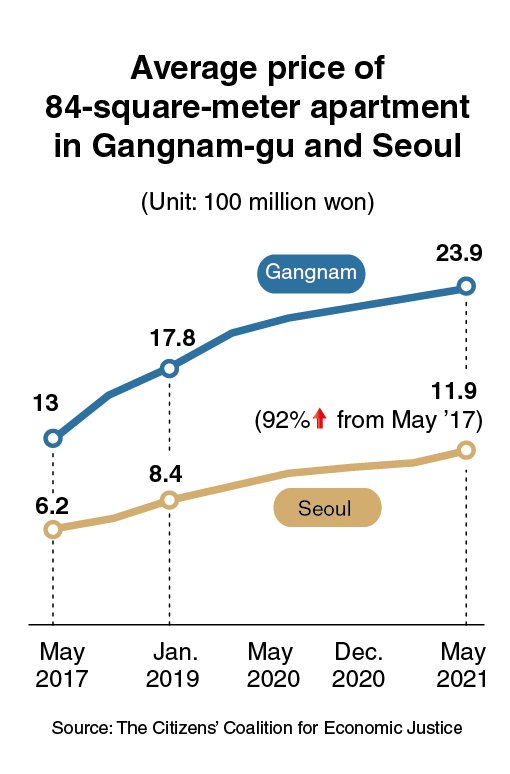 “Suppressing demand with all the regulatory tools when supply is low prompts a market crash we see today. The Moon government has done just that because it believes that’s politically sound. It’s economically unsound,” said Seo Jin-hyeong, a business professor at Kyung-in Women’s University.

Home prices would surge in the second half of 2022, after the March presidential election, though the hike would not be as dramatic as the rally this year because of a rate hike by the Bank of Korea and tighter loan curbs in response to the US Fed’s tapering, according to Seo.

Seo, president of the Korea Real Estate Society, added Korea would not repeat an asset bubble crash Japan experienced in the 1990s, saying the markets are too different. “Japanese purchased their homes on mostly loans but we didn’t. We can’t even pull a loan that big because of curbs.”

“I don’t see a meaningful connection between Seoul and Tokyo, especially in terms of a potential crash. We may have something close to a bubble – but that’s within our power to address it,” Yoon said, referring to strong data involving disposable income and purchasing power.

Experts, who all ruled out a dip in home prices next year, said the new government should ease rules but with a clear objective to put the housing market back on track.

“Bringing the prices down can’t be a means itself. Prices are the result of something, and we can’t control that unless we make changes to the process,” said Kim Yeol-mae, a senior analyst at NH Investment & Securities.

Kim proposed dealing with specific hurdles within the property market, like reducing the number of multiple homeowners, providing cheaper but quality houses in the capital or making it easier for people on the outskirts to live in the capital by other means.

“The economy grows every year and so do goods like houses. The government should find the right balance between relaxing and tightening rules while working on problems it sees in the market. And not work the market itself,” Kim said.