A large snake created with life vests is hung from the ceiling of an exhibition hall at the National Museum of Modern and Contemporary Art, Korea, as if crawling toward the audience. The 140 life vests were once worn by refugees who crossed the ocean from Africa and the Middle East and managed to reach the Greek island of Lesbos, in 2016.

Chinese dissident artist Ai Weiwei connected the life vests of adults and children collected on the island to create “Life Vest Snake,” which is a stark reminder of the ongoing refugee issue. “Laundromat,” which consists of clothes and shoes gathered at the Idomeni makeshift refugee camp on the Greek-Macedonian border, is another reminder. 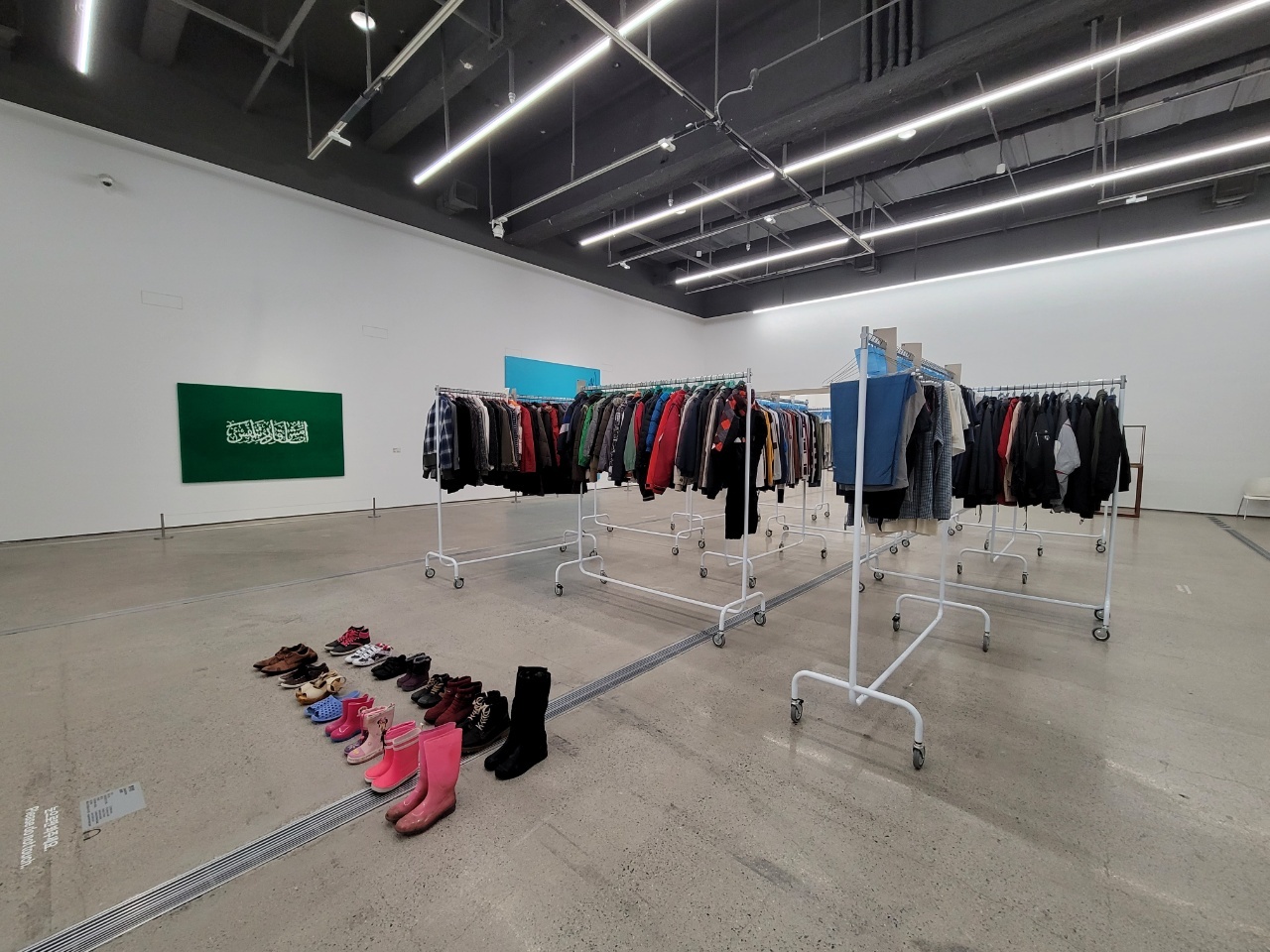 "Laundromat" by Ai Weiwei (Park Yuna/The Korea Herald)
These enthralling art pieces are some examples among 120 works made available to the public on Saturday by the National Museum of Modern and Contemporary Art, Korea. The artist’s first such solo exhibition, “Ai Weiwei: Defend the Future,” showcases representative art spanning his career.

Although the Chinese artist had an exhibition at the Gallery Hyundai in 2008, a commercial gallery in Seoul, it is his first large-scale exhibition in South Korea held at the national museum. It is also a rare opportunity for Ai to extensively showcase his range of art that includes sculptures, installations, documentaries, photographs and more.

“Many people in South Korea had been curious about Ai Weiwei hearing news about the artist but it was mostly from national and political news. We did not have many opportunities to see his works in person in Korea,” Yi Soo-jung, curator of the museum, told The Korea Herald.

“Ai’s art is expanding and he is an important artist of our time who we need to keep our attention on. In terms of his recent works including those that touch on the refugee issue, he seems to become more insightful and forward looking. That is why we titled the show ‘Defend the Future,’” she added.


Born in 1957, Ai is one of the most influential artists advocating for freedom of expression and one of the most prominent critics of the Chinese government. Chinese officials arrested Ai for his political activism and kept him in detention for 81 days in 2011.

The wallpaper installation, “The Animal That Looks Like a Llama But Is Really an Alpaca,” embodies the artist’s criticism of the Chinese government, which monitored the artist after he was released from detention via 24-hour police surveillance with 25 cameras installed around his studio.

“The government may be made up of clever, sensible people. But if they do not believe in basic human values, the more clever or shrewd they are, the greater the tragedy they will create,” reads one of Ai’s quotes on display at the exhibition. The quote comes from “Weiwei-sim: Ai Weiwei,” published in 2012.

Among some 120 works are the latest documentary about the Rohingya Muslims, photography series “Study of Perspectives, 1995-2011” and “Tree,” which is on display outside the museum. The 6-meter tree comprises dead branches and tree trunks the artist assembled after gathering them from the mountainous southern region of China.

Ai also raised a voice against the censorship of art at Hong Kong’s newly opened M+ museum within the framework of the Hong Kong National Security Law.

“To what extent is the museum being censored? And how will it change in the future? It’s hard for us to know because China doesn’t approve of the universal value of freedom of speech. Moreover, Hong Kong is not the only target of China’s censorship. Since China became a new state in 1949, freedom of speech has always been given very little space there, or in most cases, no space at all,” he added.

The exhibition will run through April 17 at MMCA Seoul. Online reservations are required.