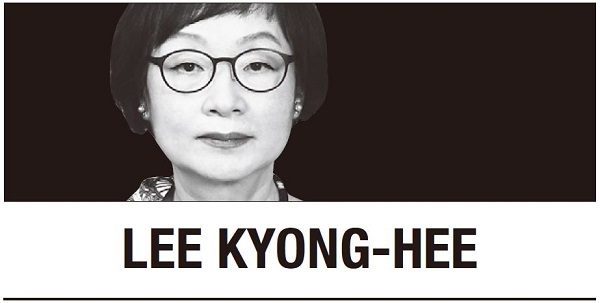 History repeats itself -- and it oftentimes is not kind. I have been reminded of this in the closing weeks of the past several years. As Korea approached the 21st century, hearts filled with hope and eyes rejoiced at sights unseen before. The history of an undivided Korean Peninsula seemed likely to be repeated. But a Cold War freeze rose again.

On Nov. 18, 1998, a cruise ship left Donghae Port on the east coast, carrying the first group of 826 South Korean tourists to Kumgangsan in North Korea. Two days later, another ship duplicated the same four-night round-trip tour to the legendary mountain. Thus began cross-border tourism and inter-Korean cooperation on the largest scale since 1948, when world powers divided the nation into the communist and democratic halves, ushering in the Cold War on a peninsula just liberated from colonial rule.

A total of 1,934,662 people visited Kumgangsan from South Korea in the following 10 years and eight months. During this time, an overland route was installed, slicing through the Demilitarized Zone and drastically cutting travel time. Then, on July 11, 2008, shortly after North Korean soldiers fatally shot a South Korean woman, Seoul halted the tours. Pyongyang claimed the visitor was in an off-limits area.

Kumgangsan is revered for its exquisite scenery. But my two trips there have etched tempered emotions. Approaching North Korea from the East Sea aboard one of the cruise ships along with other journalists in February 2002, I saw the first rays of dawn revealing the naval port Changjeon, with its eerily barren landscape. Then, trekking the valleys of the mountain, I found the streams implausibly clean -- probably too clean to accommodate any living organisms. A circus performance, which was part of the tour program, was immaculate but implied Spartan practices.

My second visit in September 2009 was sadder. I returned with family for a reunion with my sister who lived in the North, hosted by the Red Cross. As was provided by the inter-Korean family reunion regulations, five members of my family -- my mother, two elder sisters, a younger brother and I -- went to meet my sister at her request. In accordance with the regulations, some 100 South Korean families --about 500 people -- gathered at Sokcho Port the previous day, rode buses along the coastal road, crossed the DMZ and went through immigration.

The three-day reunion consisted of six meetings, including meals and an outdoor picnic, each lasting one or two hours. My sisters cried a lot, while my mother remained relatively calm. I wept too but I was entitled to feel less tormented than my sisters.

My sister in the North went missing during the Korean War. I was only 4 years old at the time, but still I can vividly recall the day we lost her. It was decades later that we learned she ended up in North Korea, became a doctor, married and had four children. The news came through her husband’s relatives in the United States, shortly before the first North Korean nuclear crisis.

Sitting around one of the 100 round tables in the big reunion hall, we looked at family photos, talked, cried and then talked. Surrounded by scores of officials and reporters from the North and South, there was little privacy in the first family gathering in six decades. Furthermore, my family happened to draw media attention because my mother was the oldest person participating in the reunions. She was 101 years old at the time. She passed away exactly 10 years later, in September 2019.

My mother prayed for my sister’s safety early in the morning every day after she went missing. But she never uttered her wishes to meet her. She knew the volatile relations between the two Koreas could possibly cause problems for her children anytime if they pursued contact -- whether official or unofficial. Returning from the reunion, she just said everything felt unreal and she still recalled more clearly the last sight of her teenage daughter before she disappeared.

Whatever my mother’s post-reunion response, I wished I could arrange for her to meet my sister one more time while she was alive. I thought she could probably travel to somewhere nearer than Kumgangsan, like Kaesong for example, where she could spend a few days with her long-missed daughter in a more private environment.

My mother passed away before I found an opportunity to try to turn that thought into action. But I still believe it can be a viable option for thoughtful policymakers in Seoul or Pyongyang who want to alleviate the grievances of separated families.

The statistics are misleading. Those counted are a small fraction of the entire population of families dispersed by national division and war. Estimates of those unregistered in the South alone run into millions.

The sorrow of separated families is a humanitarian issue that should precede any pending issues between the two Koreas. Then, economic cooperation and health care assistance for the suffering population in the North may follow, as well as a massive reforestation program to enable long-term development.

All this is wishful thinking, however, without brilliant strategic minds that can wisely navigate the rough seas of international politics surrounding the peninsula. No doubt that change must begin in the leadership of North Korea, which has emerged as a stronger military power under Kim Jong-un. Triggering the change will be the task of our next president, who will be elected in less than 100 days.