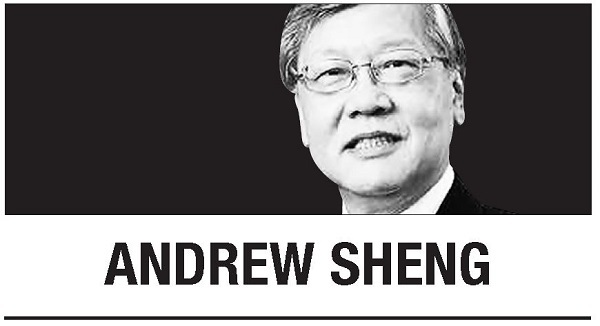 Coming back from a trip to Europe suggested to me that the US-China rivalry was not headline news within Europe. Europe appeared more concerned with the urgent job of economic recovery amidst the omicron threat that is leading to more lockdowns. Protests in Rotterdam and elsewhere showed that the public, especially the young, are rebelling against further restrictions to their rights to socialize.

Back in Asia, the news is incessantly in the face on US-China conflicts, including threatened boycotts to the Winter Olympics or Women’s Tennis Association’s suspension of women’s international tennis games in China. What happens to individuals like tennis star Peng Shuai therefore has impact on international relations.

How much of the tension is media-generated (rhetoric) rather than hard-nosed competition across all fronts (reality) between the two largest powers on the planet? The latest Foreign Affairs magazine headlines the US-China rivalry aptly: The Divided World: America’s Cold Wars. Note the emphasis on America’s Cold War.

By implication, despite President Joe Biden’s pledge in his recent UN address that the United States was not “seeking a new cold war or world divided into rigid blocs,” the question remains whether China is willing to kowtow to America’s demands on redlines such as Hong Kong, Xinjiang, Tibet or Taiwan, all of which China considers her sovereign issues.

Essentially, what game is being played by the protagonists? A wise Dutch friend observed that China was playing the Go game, Europe (including Russia) Grandmaster Chess, and the United States, poker!

The great power game is of course infinitely more complicated with nearly 200 nations in play, including non-state players like the Islamic State group, that can influence how each player moves and positions itself. However, the US, China and EU account for 16 percent each of world GDP in 2017 whilst the top ten players, including India, Japan, Russia, UK, Brazil, Indonesia and Mexico in that order, would account for nearly three-quarters of world GDP. Add in the fact that the top six plus Iran, Pakistan, North Korea and Israel are nuclear club, makes the power game a lethal one.

Henry Kissinger, the architect of the US-China detente in the 1970s, posed the essential questions for the unfolding US-China rivalry as one in which “both were too large to be dominated, too special to be transformed, and too necessary to each other to afford isolation.” He called the “appropriate label for the Sino-American relationship as less partnership than “co-evolution,” because “neither is capable of defining terms for victory in a war or in a Cold War type of conflict.”

The conventional wisdom is that China is getting close to parity with the United States in economic power, not quite there in financial power, and distinctly behind in military and media power. This is a psychological test of wills, in which the rest of the world is unwilling as yet to choose sides.

Kissinger correctly assesses that “the United States is more focused on overwhelming military power, China on decisive psychological impact. Sooner or later, one side or the other would miscalculate.”

The structural reality is that rational calculations would ensure that in the fact of mutually assured destruction from nuclear war, both protagonists will back off from actual conflict. Kissinger is also spot on in that in any rational competition, only America is responsible for restoring her infrastructure, manufacturing and domestic social capital to bolster her economic and technological competitiveness, something China cannot be involved in.

But the danger is that emotional factors, particularly on questions of values and egos, plus small incidents and events by other players, provoke what each player sees as a decisive test of wills, end up in escalation to hot conflicts.

Thus it would take statesmanship standards of leadership on both the US and Chinese presidents to ensure that such accidents and miscalculations do not boil over to actual hot war. The hard reality is that whilst Xi will still be around by 2024, the risk that Biden may lose his legislative majorities in 2022 or even re-election in 2024 means that at best the US-China relationship will be one of detente.

As we peer into 2022, it would be safe to say that there will be no big vision policy break-through from any of the big players, only more “steady as she goes” muddling through. The real test of national and global leadership in the years ahead will not be how they manage the international order, but how they avoid further disorder.


By Andrew Sheng
Andrew Sheng writes on global issues from an Asian perspective. The views are entirely his own. -- Ed.