[Pico Iyer] Finding a balance between COVID freedom and control 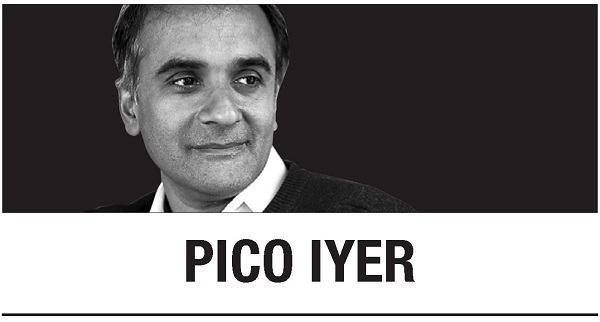 This long, strange season of the pandemic has made so many things impossible that it’s easy to forget the many things it’s made newly possible. For me, one of its unexpected gifts has been a round-the-clock immersion -- and instruction -- in the vast gap between the two continents I call home and the radical differences that still cut up our seemingly connected global neighborhood.

Ten times during the age of COVID-19 I’ve flown across the Pacific between my longtime apartment in Japan and my mother’s house in Santa Barbara; on every occasion, over 21 months now, I’ve come away shocked all over again at how starkly the Far East and Far West inhabit different universes.

This fall, to take an example, I had to fly to LAX from Japan before returning to Japan 10 days later. I stepped into my California health club, my first night in Santa Barbara, to be greeted by a sign on the front desk reminding everyone that masks were still mandated in all indoor settings. But not a single one of the 20 people I saw wore masks, not even the staff members there to enforce the rule. In Japan, 24 hours earlier, I’d watched people run for 50 minutes and more on treadmills, unfailingly masked.

This was striking because Los Angeles County alone has lost 50 percent more people to COVID-19 than all Japan; the current number of cases in the Japanese prefecture where I live (population 1.32 million) is zero.

Arriving in the Tom Bradley terminal, I had to undergo no in-person checks of any kind at immigration or customs, let alone show proof of a negative COVID test (then still supposedly required to enter the US) completed within 72 hours of my departure. Flying back to Japan, I submitted 19 pieces of paperwork and had to take two COVID tests in the space of four days and then go through 11 checks on arrival at Osaka’s airport, even before I got to immigration or customs. At the 10th of those checks, I was obliged to rent a cellphone, so the government could locate me every minute for the next 14 days of self-quarantine, accompanied by a 27-page brochure instructing me on how to report my whereabouts and condition.

How much is Japan’s super-vigilance the cause of its relative freedom from the effects of the virus? How much does it represent what some in the West see as a violation of basic human rights? Almost every shop or even temple I enter near my apartment in Nara seems to check my temperature upon arrival; every table at my neighborhood Starbucks has a message, in English and Japanese, saying, “Thank you for wearing your mask during your conversation while eating and drinking.” On the local train, regular announcements remind us not to speak, lest we spread contagion.

For the 34 years I’ve been commuting between my homes, I’ve regularly reflected on the difference between the desert of California -- wide-open but often lawless and sometimes lonely -- and the ordered, cultivated and strictly bounded garden I know in Japan.

From the day I met my Japanese wife, in 1987, I could see how much she was hungering for the sense of possibility, of openness, of self-making that she associated with the West, even as I was being drawn by the sense of constancy, of stability, even of responsibility I ascribed to her part of the world. She was sure that women enjoyed many more public opportunities in my country than in hers, even as I was confident that people of either sex could learn more about loyalty and obedience in her world than in mine.

Of course one of the best things that Japan has taught me is not to think in terms of simple binaries, the kind of reductiveness I’m offering here. The absence of complete freedom doesn’t mean oppression any more than an aging body that isn’t entirely healthy is sick. Life seldom traffics in blacks and whites. The Japanese doctors who administered COVID tests to me this year were as violent and peremptory as the kids who gave them to me in Californian parking-lots were careful and sweet -- even as the Japanese Consulate in LA has been the last word in kindness and thoughtfulness in trying to help me get safely back home.

All of us, as neighbors and parents and humans, are forever trying to find some workable balance between freedom and control; we keep swiveling the hot tap, and then the cold, to find the temperature that’s perfect. It’s been quite a relief to face no COVID bureaucracy -- no questions at all -- whenever I fly back to the Land of the Free; but what a joy it is to step into the jam-packed trains of Japan and realize that everyone is doing what they can to protect me from their germs, even if by keeping their mouths firmly shut.


By Pico Iyer
Pico Iyer is the author, most recently, of twinned books about his adopted home, “Autumn Light” and “A Beginner’s Guide to Japan.” He wrote this for the Los Angeles Times. -- Ed.