The Ho-Am Art Museum in Yongin, Gyeonggi Province, has returned with the new exhibition “Metallurgy: Great Wisdom” and its formal garden, Hee Won, in its full autumnal glory.

The museum run by the Samsung Foundation of Culture was founded in 1982 to house traditional Korean art collected by Lee Byung-chull, founder of Samsung Group. Named for Lee’s pseudonym, Hoam, the museum boasts a garden by Korea’s first-generation landscape architect Jung Young-sun inspired by traditional gardens at royal palaces.

Upon passing through the gate Bohwamun, visitors may walk through the plum tree grove leading to the main garden and museum. Although the peak season for fall foliage has passed, one can still enjoy the autumn scenery of the 66,000-square-meter garden with its small ponds, pavilions, stone sculptures and a stone pagoda from the Goryeo Kingdom (918-1392), which is part of the museum’s collection.

The exhibition “Metallurgy: Great Wisdom” offers a comprehensive overview of Korean metal art, ranging from ancient times to the present. Metallurgy refers to the overall process of mining ore, extracting metals from it, refining the metal and modifying it into a form suitable for its intended use. The exhibition focuses on how Korean metal art has evolved from the Bronze Age to the contemporary period.

“Bronze culture appears to have emerged on the Korean Peninsula around the 10th century BC and continued to gradually develop throughout the Bronze Age,” said curator Lee Kwang-bae. “The gold crowns and gilt-bronze Buddhist sculpture from the Three Kingdoms period, the splendid jewelry of the Unified Silla period and mother-of-pearl-inlaid works from the Goryeo era are internationally recognized embodiments of Korean beauty.”

The Amitabha Buddha Triad that consists of three small metal sculptures of Buddha, was shown at the museum for the first time after it was acquired some five years ago. The approximately 20-centimeter-tall metal figures were created during the Goryeo Kingdom in the 16th century. The details of the sculptures are unprecedentedly delicate and sophisticated. The museum is considering applying for registration for them as state-designated cultural heritage.

The exhibition features five national treasures and two treasures such as a dagger and spearheads from the Samhan period in the first century BC, and gold earrings from the Silla Kingdom, around the fifth to sixth century. After Buddhism was introduced to Korea during the Three Kingdoms period, numerous Buddhist works of art were created. Among the works on display is an iron seated Buddha statue from the Goryeo Kingdom dated to the 10th century.

The last section of the exhibition presents works of art by Korean-born contemporary artists such as Lee Ufan, Yang Hae-gue, Suh Do-ho and Jon Bae that were created using metallic materials to show how metal artwork has continued to evolve over time. 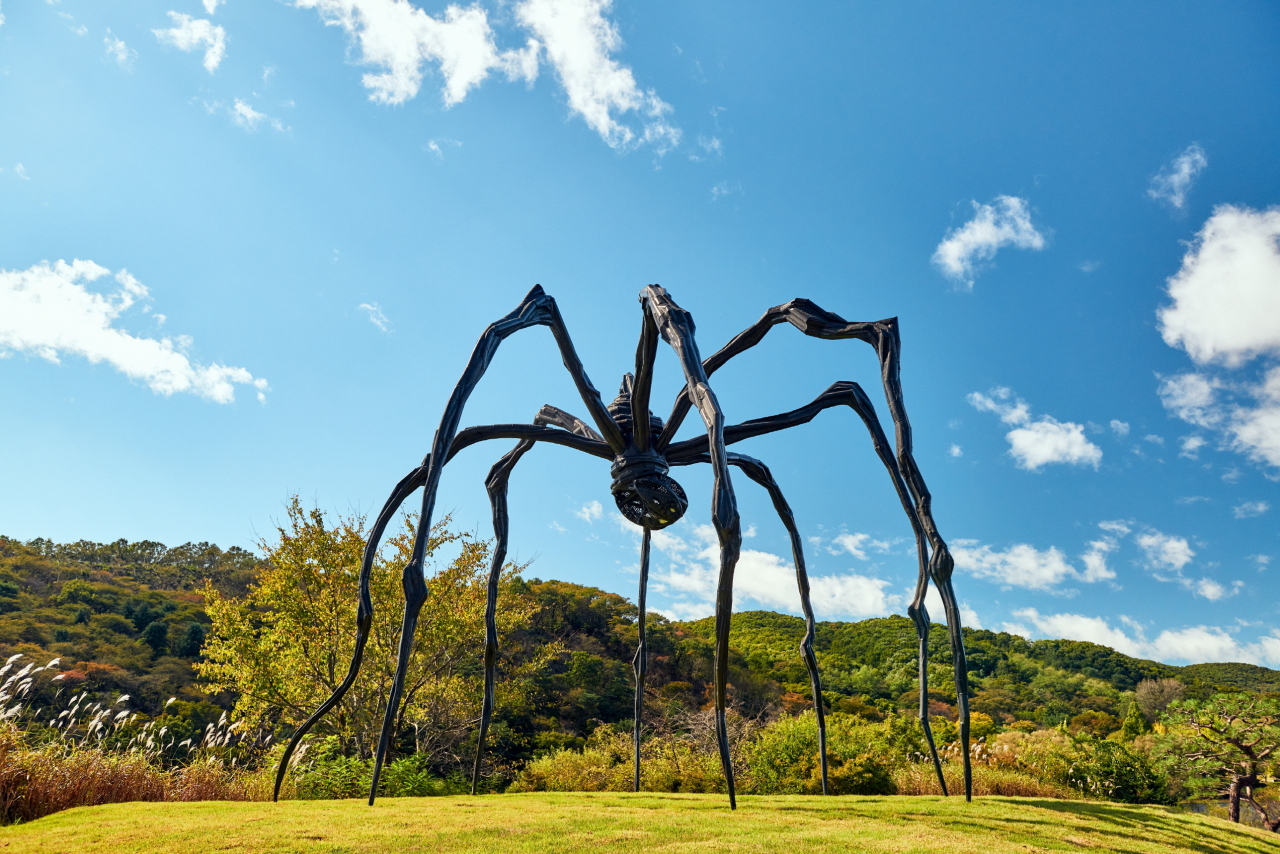 "Maman" by Louise Bourgeois (Ho-Am Art Museum)
The monumental spider sculpture “Maman,” by French artist Louise Bourgeois, once stood at the Leeum Museum of Art in central Seoul, but was moved to the lakeside near the Ho-Am Museum of Art where its full majesty can be viewed against the surrounding mountainous scenery.

The exhibition will run through Dec. 12, after which renovation of the museum will resume in late December.

Admitting that the Ho-Am Art Museum has received relatively less of a spotlight than the Leeum Museum of Art in Seoul, the Samsung Foundation of Culture said more efforts will be made to raise the museum’s profile in the global arts scene.