Kim wants people to see her works with their heart; knowledge or information are unnecessary for her paintings, she said.

By Park Yuna
Published : Oct 23, 2021 - 16:01       Updated : Oct 23, 2021 - 16:01
A painting shows a woman kneeling in a forest trying to catch fireflies raining down on her as if they are blessing the woman; another shows a woman holding a jar that contains dry branches, but outside the jar, they turn into cherry blossoms, as if to say good days will come after cold and painful days.

“My paintings have nothing to do with ‘-isms’ or trends. They are about my ordinary life, so you don’t have to approach them in a difficult way. You don’t need background knowledge about art, as you can see here,” Korean-American artist Kim Won-sook told The Korea Herald, while showing her works at Gallery Yeh in Seoul, where her solo exhibition “In the Garden” is taking place until Oct. 30.

“What comes to your mind when you see my works? That is real. I don’t have any answers,” she said. “I paint based on my experiences, but they are also universal. The paintings can become the viewer’s own stories,” she said. 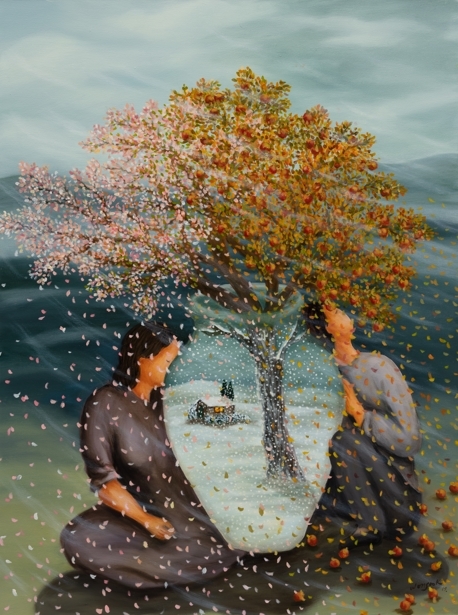 "Winter Tree” by Kim Won-sook (Gallery Yeh)
Kim is inspired by what happens around her in her everyday life. Her ordinary moments, people she meets, and books she reads are what she refers to as a “food for my paintings.”

Kim was born in 1953 in Busan and moved to the US in 1972 to study art after attending Hongik University for a year. She received a scholarship to attend Illinois State University and graduated with her Master of Fine Arts degree in 1978. Kim has held more than 60 exhibitions at museums and galleries in the US, Europe and South Korea.

“It was sort of a running away when I left for the US,” she jokingly said. “I was young at the time, and I had admiration for a new world.”

In 2019, Kim and her husband, Thomas Park Clement, made a donation of 12 million dollars to Illinois State University. In recognition of their contribution to the university, Illinois State University’s College of Fine Arts and the School of Art were named the Wonsook Kim College of Fine Arts and the Wonsook Kim School of Art. She was also awarded an honorary Doctor of Arts degree.


"My husband and I are thankful to the country. Although many Koreans study abroad, not many of them are given an opportunity to give back (what they have received), but luckily enough, I was able to do so.” she said.

Kim is married to Clement, A Korean-American adoptee who is a medical device investor. He was adopted from a Korean orphanage after the Korean War. He became a successful entrepreneur in the US, establishing a medical device company which he liquidated three years ago.

Kim attributes the decision to make a donation to her husband, who has been a supporter and a source of inspiration for her. She respects his positive attitude towards life although he had to struggle with many difficult moments, Kim said. Clement is also involved in a program that helps match adoptees in the US and their biological parents in Korea.

“It may sound cliché, but he is a type of person who would say the ‘glass is half full, instead of half empty.’ He is completely very positive,” she said.


In her book “In the Garden,” which contains stories of her art, Kim mentions her husband who says “Ah, today is a good day” almost every morning when he wakes up. “Yesterday was also a good day because it rained, and so was the day before yesterday, because he could sleep in. Every day is a great day for him,” she writes.

Kim is grateful for many things. Among them are people who visit her exhibitions and stand in front of her paintings for quite a long time. During the interview, Kim saw a college student who looked focused on the paintings. When asked about her works, the student replied to Kim, “Your paintings touched my heart.”

That is the best compliment she can get from viewers of her art, Kim said, adding that such feedback makes her think that they are alive, feeling artwork without ”reading“ it.

“They want to see with their heart. They are talking to the work based on their experiences and memories. Art is about communication between me, the maker, and you, the viewer. It is a connecting point,” she said. “It is important what is created between us. If viewers are not sure what they feel about the works, I would say the communication failed.”


Just because her paintings are hopeful does not mean that she thinks life is always good. Although life sometimes gets as difficult as can be, she believes that is not the end of the story and that things will eventually get better. “This is not it. It (life) continues, you know,” she said.

Kim used to visit South Korea once a year and meet her 94-year-old father, but the pandemic hindered her plans and she is now back for the first time in almost two years. As an artist, the pandemic made her reflect on her life. Just like reorganizing a closet, she felt like she needed to organize her surroundings as well during the pandemic.

“For me, painting is to record a life in a beautiful way,” she said. “There have been so many difficult moments, but I have taken them gratefully. I can’t expect more now because I am healthy, I have a husband who is supporting me, my children are all grown up. I am preparing exhibitions scheduled after this in the US, Berlin and so on.