[Kim Seong kon] Young people, do you know the sorrow of the survivor? 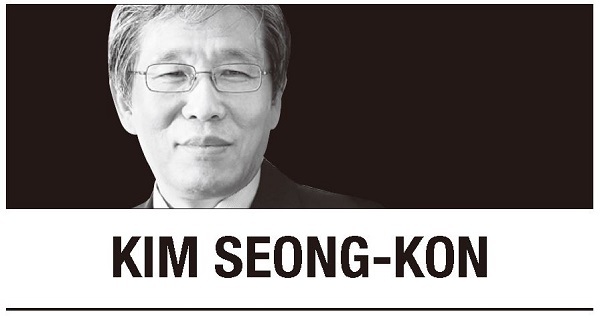 Although they often miss their youth, old people are wise enough to know that they cannot get any younger. For some inscrutable reason, however, some young people seem to forget they will grow old someday. They naively think that they will be young forever. Perhaps that is why they unabashedly make fun of elderly people, or have even gone so far as to insult them in public by calling them various derogatory names, such as “old bat,” “old-timer,” or “kkondae” in Korean. Surely, however, no mortals can reverse the entropy of getting old.

Recently, a Korean man reportedly criticized a 101-year-old retired philosopher, saying, “He reminds me of the old saying that living too long is dangerous.” Obviously, this pro-government man did not appreciate the fact that the renowned philosopher had lately written a series of articles that disapproved of the misguided policies of the Korean government. Perhaps the younger man did not realize that he, too, would be doomed to be old soon enough.

Instead of listening to older people’s advice and admonitions, our society tends to deride them as if they were senile. Some time ago, another man publicly insulted the elderly, saying, “Those who are over 60 should stay at home, not come out to vote.” It is an irony and shame that such prejudiced people claim that they are progressives or liberals. It is no wonder that those rash people, who happen to be the leaders of our society, become an embarrassment when they are overseas because they do not realize that the rest of the world no longer tolerates ageism.

Old people are survivors. They have survived the many tempests of history, which has given them insight and wisdom. The have survived their friends, too, which makes them sad and gloomy. The 101-year-old philosopher also happens to be the survivor of all the major crises in recent Korean history such as the Japanese occupation, the Korean War, the May 16 military coup, the Dec. 12 military coup, and the COVID pandemic. He has survived many of his friends, as well. As the protagonist of “Squid Game” does after surviving the deadly games, the old people who survived these historical upheavals feel sorrow and remorse. That is why they try to warn us, so young people will not repeat the same mistakes.

To those prejudiced younger people, therefore, we should ask, “Do you know the sorrow of the survivor?” In his monumental poem, “I, the Survivor,” Bertolt Brecht wrote, “I know of course: it’s simply luck/ That I’ve survived so many friends/ But last night in a dream/ I heard those friends/ say of me: “Survival of the fittest”/ And I hated myself.” (Translated by John Willett). In order to avoid the Holocaust, Brecht fled and went into exile in the United States and as a result, suffered “the sorrow of the survivor.”

The younger generation would never understand the sorrow of the survivor. Therefore, they have no right to dismiss the older people’s forewarnings or desecrate their memories and accomplishments. The older people could and should warn us when we are derailed and suggest the right direction to us. They are an embodiment of our turbulent history and we should learn from their experiences and wider perspectives.

Recently, I met an old man who had lost his olfactory senses due to his long-term use of nasal spray. He cynically told me, “I cannot smell anymore. The downside of it is that I could not smell delicious cuisine anymore, but the good thing is that I could not smell the stench of our society either, especially the political arena.” I met another old man whose eyesight is deteriorating. He told me that ironically he felt relieved because now he did not have to see all sorts of ugly things around him. The third old man I met was wearing a hearing device. He said, “I wear it only when I talk to someone, so I don’t have to hear what I don’t want to hear.”

From these three old men, I could detect the disillusionment of the older generation in our society. Having witnessed and experienced so many calamities and catastrophes already, they cannot but warn us when they think the nation is going in the wrong direction again. Yet, young ones who naively think they know everything often ignore the older generation’s admonitions. Perhaps that is the circle of life. In Ecclesiastes, King Solomon writes, “A generation goes, and a generation comes/ but the earth remains forever.”

As we grow old, our physical strength is diminishing. Yet, the 101-year-old philosopher’s mind is perfectly sound. His profound insight and powerful criticism of our society is still penetrating. He tries to show us the right path before his body fails him, “before the silver cord is severed, and the golden bowl is broken,” as Solon puts it, metaphorically.

We all are going to get old and become survivors one day. Let us now honor the sorrow of the survivor.