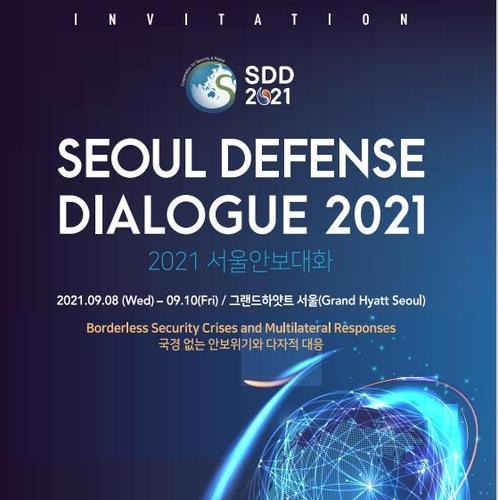 An annual international security forum hosted by the defense ministry kicked off in Seoul on Wednesday for discussions on situations on the Korean Peninsula and the surrounding region.

The vice-ministerial 2021 Seoul Defense Dialogue (SDD), set to run until Friday, will bring together senior officials from countries including the United States, Japan, China and Russia, as well as experts on issues including the pandemic, according to the ministry.

Under the theme of "Borderless Security Crises and Multilateral Responses," this year's SDD will have its panels attending either in-person or virtually starting with sessions on climate change and cybersecurity.

During an opening ceremony slated for Thursday, Defense Minister Suh Wook will give opening remarks, followed by a congratulatory message from the European Union foreign policy chief Josep Borrell and a keynote speech from British Foreign Secretary Dominic Raab, both in videos.

"It will be the first time for senior diplomatic and security officials from key countries in the region, including the US, Japan, China and Russia, to simultaneously take part in the event," the ministry said in a release, adding that it hopes the forum will serve as an opportunity to reassure international cooperation for peace on the peninsula.

The event comes as North Korea is expected to hold a military parade this week to mark the anniversary of the country's founding, after it warned of a "serious security crisis" in protest of the South Korea-US combined exercise in August.

On the sidelines of the forum, Seoul was to have vice defense ministerial talks with members of the Association of Southeast Asian Nations (ASEAN) on Wednesday.

The three-day event will be livestreamed on the defense ministry's YouTube channel. (Yonhap)