Inspired by scholar‘s stones and telecommunication base stations, young artist experiments with materials

By Park Yuna
Published : Sept 1, 2021 - 16:23       Updated : Sept 1, 2021 - 16:25
Sculptor Hyun Nahm is the youngest artist to hold a solo exhibition at the Atelier Hermes in Seoul, the exhibition space run by the Fondation d’entreprise Hermes. The 31-year-old artist believes sculptural objects can express sceneries as do the stones that maintain their own characters influenced by the surrounding environment.

The sculptures Hyun is showcasing at the exhibition “Burrowing at the Bottom of a Rainbow” are produced with a negative casting technique using materials such as polystyrene, cement and epoxy that are widely used as cheap industrial materials.

Using various tools, Hyun makes holes in blocks of polystyrene before pouring different materials into the holes. After they have hardened, he melts the blocks and removes the polystyrene. Until the polystyrene is removed to bring out the result, he can only roughly predict the final form.

“When epoxy is poured into the holes -- or caves -- they go through some chemical reaction inside the holes. If a different color is added to epoxy at each stage, the final result shows how the different parts in different colors reacted to the others,” Hyun told The Korea Herald.

The chemical process triggers a variety of colors that may look either instant, cheerful and stimulating or harmful which remind one of animations, games and other images that are ceaselessly produced and reproduced on the internet -- media content the artist said he “wastes” a lot of time with.

The idea to express sceneries through sculptures came from his interest in scholar’s stones -- rocks resembling natural landscapes that are appreciated and collected by scholars. He came across the images of a collection of scholar’s stones on the internet back in 2017.

“Then I learned the concept of ‘miniascape’ that refers to a vast natural landscape miniaturized to be appreciated in a small room or garden, which was really interesting to me,” he said. “I came to want to sculpt the world that I am living in, expressing it in a contemporary way.” 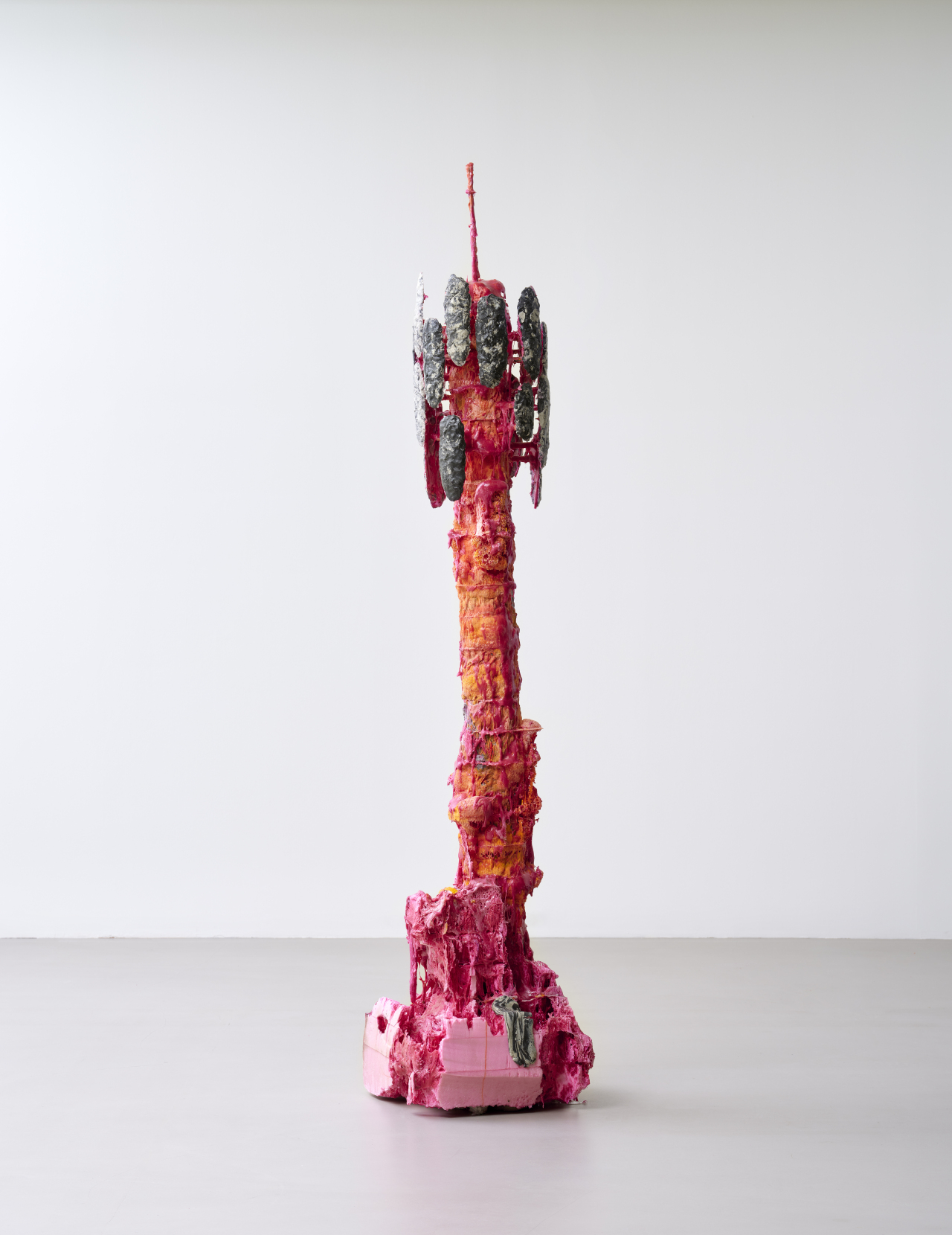 "Cell Tower” by Hyun Nahm (Atelier Hermes)
The shapes of the sculptures made out of polystyrene and epoxy are -- in fact -- inspired by telecommunication base stations that are omnipresent across the city, he said. The artist often goes out to look at mountains on the outskirts of Seoul to observe the variety of base stations.

“When the COVID-19 pandemic broke out, fake news spread in the UK and on social media that the virus spreads through electromagnetic waves from 5G base stations. It led people to burn them throughout the UK and in other countries in Europe. I became aware of the base stations for the first time in my life,” he said.

“In Korea, the telecommunication base stations look somehow grotesque and are installed next to a church cross. Church crosses are commonly found here soaring high into the sky and base stations remind me of the pointed spires of Gothic architectures. The combination of these two is aesthetically impressive,” he added.

The exhibition runs through Oct. 3 at the Atelier Hermes in Seoul.