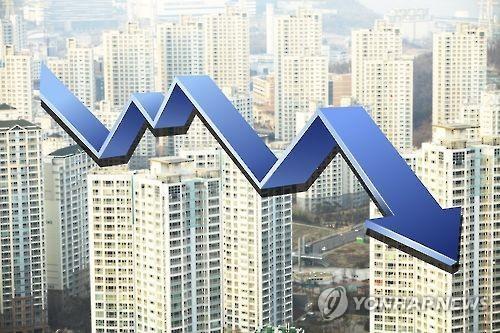 The number of homes changing hands nationwide stood at 88,937 last month, down 37.1 percent from a year earlier, according to the data from the Ministry of Land, Infrastructure and Transport.

The July reading was little changed from the 88,922 deals registered in the prior month.

The number of home transactions in the South Korean capital of Seoul plunged 58.7 percent on-year to 11,014 in July.

Apartment transactions sank 42.1 percent on-year to 59,386, with those of other housing types falling 23.8 percent.

July's nosedive came amid a near absence of home trading following a series of government measures to cool the hot property market, including plans to increase the home supply, and restrictions on mortgages and apartment leasing contracts.

Sky-high home prices have stoked public discontent with the Moon Jae-in government despite its concerted efforts to make homes more affordable, especially in the capital Seoul.

The ministry, meanwhile, said the country's new home permits swelled 21.1 percent on-year to 277,354 in the first seven months of the year.

New construction permits in Seoul spiked 52.3 percent to 46,041 in the January-July period. Those issued for the capital area, which includes the western port city of Incheon and the adjacent province of Gyeonggi, gained 18.1 percent on-year to 143,140, and those in the rest of the country surged 25.4 percent to 134,214.

By type, construction permits for new apartments surged 23.1 percent on-year to 206,800 units, and those for other types of housing, such as row and detached houses, expanded 15.7 percent to 70,554.

The number of groundbreakings for new homes increased 11.8 percent on-year to 310,937 units during the seven-month period, according to the ministry. (Yonhap)