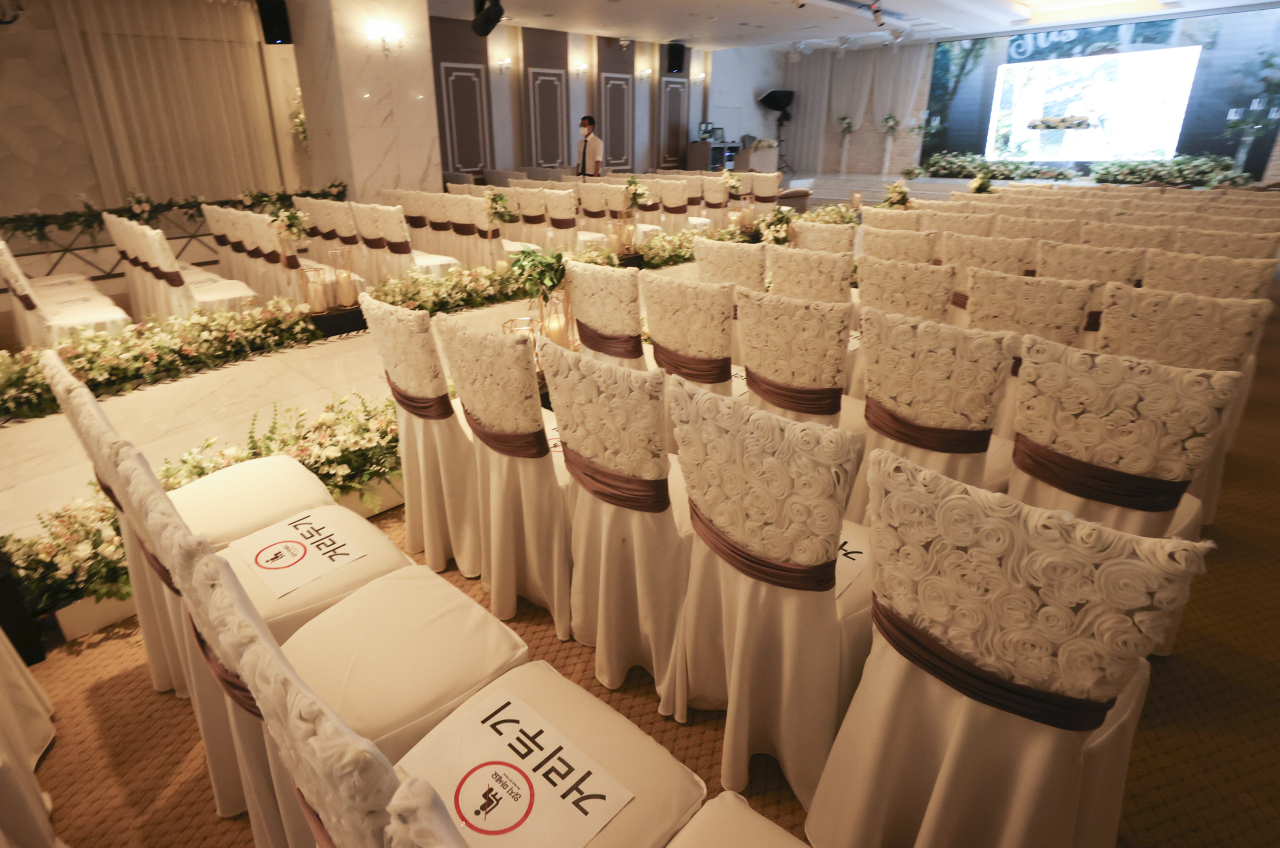 1. Weddings again under threat as ‘unfair’ Level 4 rules allow only up to 49 guests

[1] Wedding ceremonies in South Korea face another round of cancellations and disappointment, as restrictive virus rules limit the number of guests and force organizers to pivot from their game plans.

[2] At the moment, Seoul, Incheon and Gyeonggi Province are under Level 4 social distancing rules, limiting the number of guests at weddings there to 49. The rule is not likely to be relaxed anytime soon, which has drawn immense anger from to-be-married couples and wedding venues alike.

[3] Officials and experts have estimated the worst may be yet to come, with some speculating the current rules will remain in place at least until the end of the Chuseok holiday period in late September.

[4] With little chance of rules being relaxed in sight, some couples have been postponing their weddings, while others have no choice but to hold their ceremonies as scheduled with empty seats, incurring financial damages from the still-running buffets.

2. KTO sets goal to attract a million visitors to Ulleungdo

[1] With the aim of boosting the presence of Ulleungdo as a global tourist destination for both local and global visitors in the next five years, the Korea Tourism Organization has joined hands with Ulleung County and Kolon Glotech, Inc., the KTO announced Friday.

[2] Ulleungdo, an island east of South Korea is 72.86 square kilometers in size, and has a population of about 10,153. The island is known for its well preserved natural environment along the coast and its geographic significance, overlooking Dokdo and other historically meaningful islands.

[3] Over the five-year period, the three organizations will actively carry out both business and cultural projects with a goal of raising Ulleungdo’s annual visitors to 1 million by 2026.

[4] Planned projects include supporting a variety of tourism content and improving the island’s accommodation infrastructure through the introduction and promotion of the Korea Quality certified designation system created by the KTO to help tourists select ensured quality accommodations and services. The KTO also plans to develop tourism products linked to Ulleungdo’s key features.