ROSEAU, Dominica, Aug. 19, 2021 /PRNewswire/ -- The Commonwealth of Dominica has topped the chart with the best citizenship by investment (CBI) programme in the world for the fifth consecutive year. This is according to the CBI Index, an annual report published by the Financial Times' Professional Wealth Management magazine. 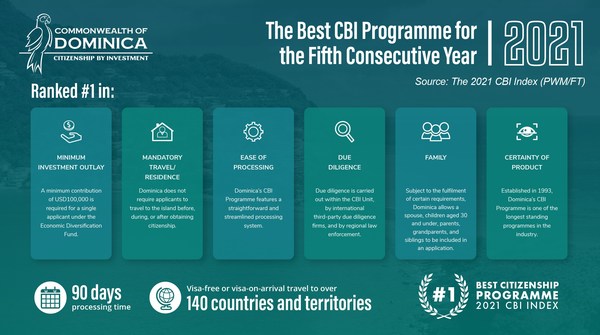 For the fifth consecutive year, the Commonwealth of Dominica was ranked as offering the world’s No. 1 Citizenship by Investment Programme, according to the 2021 CBI Index, published by FT’s PWM magazine.

The study measures the performance and appeal of 14 CBI programmes across various indicators it calls 'pillars'. Dominica attained maximum points in six out of the nine 'pillars': Minimum Investment Outlay, Mandatory Travel or Residence, Ease of Processing, Due Diligence, Family, and Certainty of Product.

"For Dominica, first place has been a consistent result for five consecutive years. Maintaining a perfect score in six out of the nine pillars assessed, Dominica once again promises, among other things, an affordable minimum investment outlay, a streamlined application process, and certainty to investors," the report read.

Due to the transparency and prominence of the Dominica CBI Programme, Dominica was the only country that achieved a full score in the Certainty of Product pillar. "At 28 years old and with a track record of good governance, the Dominica CBI Programme has led the way in providing clarity as to how CBI funds are used," the researcher noted. It added that the country "used CBI revenues to successfully mitigate the effects of national disasters."

Ambassador Emmanuel Nanthan, the Head of the Citizenship by Investment Unit (CBIU) in Dominica, commented, "It is of great honour to see that Dominica came out on top once again. Of course, it is not a surprise to us as we lead and set the example for excellence in the investment immigration industry. It was good to see the reward for it."

In terms of the global mobility afforded to Dominican citizens, the report noted that "Dominica was the Caribbean nation with the greatest increase in its visa-free and visa-on-arrival offering for the second year in a row." Applicants and their family members who successfully pass all security checks and obtain citizenship of Dominica can travel to over 75 percent of the world.

Prime Minister Roosevelt Skerrit said: "Those who become Dominican citizens are considered a part of our family. They help build our roads, hospitals and schools through your investment in our CBI Programme."

Dominica established its CBI Programme in 1993. With a minimum contribution of USD 100,000 to the Economic Diversification Fund, reputable foreign investors can apply through an Authorised Agent listed on the CBIU site and attain second citizenship of Dominica without being subject to travel or residence requirements, often within three months of application submission. Applicants can also choose to apply through the real estate route, by investing in Government-approved eco-luxury properties like the Marriot, Hilton, or Kempinski or a boutique resort like the award-winning Jungle Bay or Secret Bay.