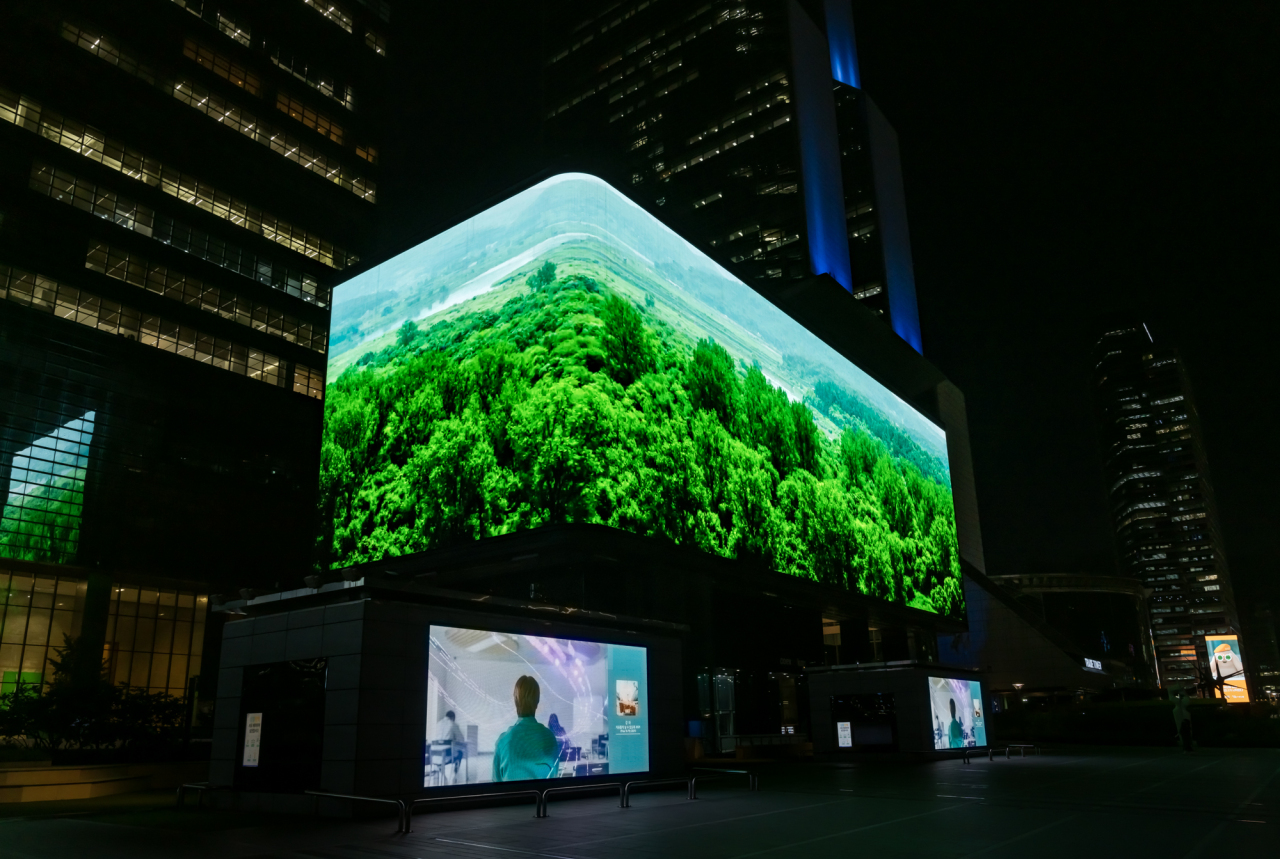 A beautiful green landscape unfolds for three minutes at 8:21 p.m. every day on the country’s largest LED billboard, at Coex K-Pop Square in Gangnam-gu, southern Seoul.

Whether they are waiting for a bus or walking down the street, people look up at the display and see the dense, lush forest appear in the city’s concrete jungle.

The landscape is the Demilitarized Zone, a 250-kilometer strip of land that serves as a border between the two Koreas. The land has become an “ecotopia,” having been left untouched since the Korean Peninsula was split into South and North Korea after the Korean War in 1953.

To create the film, artist Jun So-jung traveled to the DMZ in June after just barely gaining access to the wildlife habitat that is a haven to 2,000 species, including endangered animal species.

Different parts of the 12-minute film, titled “Green Screen,” are shown every day for around three minutes on selected commercial billboards in Seoul, London and Tokyo throughout the month of August.

The screenings are part of digital art platform Circa’s global project to give the public a chance to appreciate art in outdoor spaces during the pandemic. The project is directed by Circa’s Artistic Director Josef O’Connor.

Jun had been interested in the DMZ for a long time, intrigued by places that reflect current issues and cast many questions. While the DMZ is widely regarded as a symbol of tragedy and a byproduct of the Korean War, Jun wanted to present the DMZ in a different light.

The 40-year-old artist made up her mind to visit the border area to experience the space, entry to which is strictly limited for security reasons. She filmed the scenery from the Civilian Control Area adjacent to the DMZ that is guarded by South Korea.

“I was deeply impressed by the smell of grass roots, the blazing landscape and the strong life force,” Jun said during an interview with The Korea Herald on Tuesday in Seoul. “I wanted to bring them to my work and reflect on the human-centric attitude toward nature.”

The media artist, whose works are mostly displayed on screens, considers it a medium that can deliver multiple layers of significance and metaphor -- if you peel away one layer, there are many layers behind it.

“If you encounter the screen without knowing that it was filmed at the DMZ, you will simply think it is a well-preserved natural space. But when you realize it is a historic place and understand the ironic way that this ecotopia came into existence, the film may remind you of different global conflicts or personal conflicts, beyond the issues between the Koreas,” she said.

While she was impressed by the scenery, she recalled the high tension and tense atmosphere of the military area --surrounded by wire fences, with soldiers on guard and land mine markers.

To recreate the intense atmosphere with the film’s background music, Jun reinterpreted Yun I-sang’s “Double Concerto” in 2020 and had it performed by a Korean Japanese musician on a North Korean-style gayageum, a 12-string zither-like instrument.

On Aug. 16, another production by Jun, a 10-minute film titled “Early Arrival of Future,” will be presented at the square for a one-time showing. The film was presented at the Seoul Museum of Art in 2015 to commemorate the 70th anniversary of Korea’s liberation from Japan’s colonial rule. It shows a piano performance by a South Korean pianist and a North Korean pianist who escaped to the South. 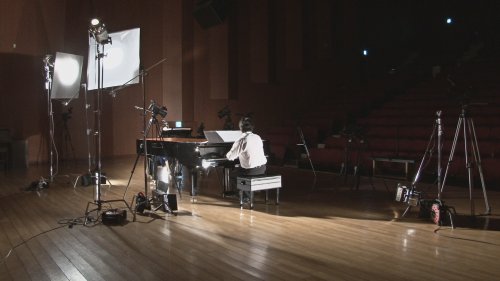 "Early Arrival of Future" by Jun So-jung (Courtesy of the artist)
Jun and O’Connor decided to show the film, which resonates more than ever today with the pandemic escalating feelings of hostility and hatred globally.

For Jun, who comes from a generation that has not experienced war, it was important to tell stories she could relate to.

“Issues such as the Cold War and the Korean War are not something tangible to me because I did not live in the era. But for our generation, living with North Korean defectors is another challenge for us.

“So I spent a lot of time talking with the North Korean pianist on various issues, which was a hugely important part of the film work,” she said.

As a media artist, Jun takes great care to integrate digital elements into her artworks. With “Green Screen,” she incorporated the digital glitches that occur while processing data to reflect the political nature of the issues.

“When you work on digital data, it experiences some digital glitches and changes while it gets processed. I saw that as a reflection of democratic participation, where people can add feedback and participate in certain issues,” she said.