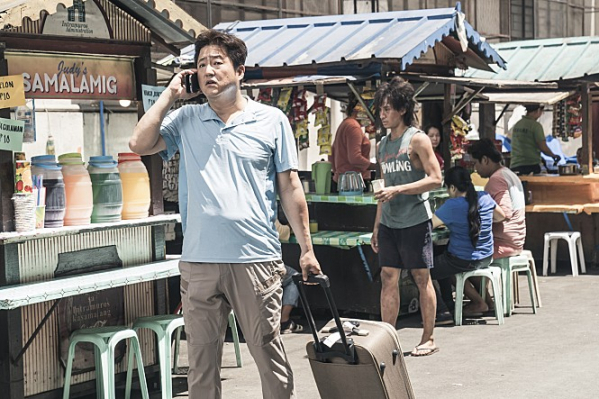 "The Golden Holiday” directed by Kim bong-han. The movie was filmed in both Korea and the Philippines. (Showbox)
The Korean Film Council will hold the 2021 ASEAN-ROK Film Workshop Series on Wednesday from 3-6 p.m. to strengthen the network between the movie industries of ASEAN countries and Korea.

The workshop will be live streamed on KOFIC’s official YouTube channel.

This year’s theme of the workshop is “Discovering a sustainable film exchange and cooperation model between Korea and ASEAN in the post-corona era.” The event will be divided into two parts -- forum and masterclass.

During the forum section, “The Golden Holiday” producer Jang Sung-won will be the first speaker and talk about his experience creating the film, which is shot in Korea and the Philippines.

He will be sharing know-how as well as some of the problems that might occur when creating a film abroad or co-producing it with companies from overseas.

“The Golden Holiday” is an action comedy film that features veteran actor Kwak Do-won as a police detective who becomes a murder suspect during a family trip to the Philippines.

Raymond Phathanavirangoon, the founder of pioneering non-profit script and film development lab Southeast Asia Fiction Lab, will talk about his experience operating the lab and how COVID-19 has impacted the film industry during the forum section. He will also provide some suggestions about how ASEAN countries and Korean filmmakers can work together in the post-COVID-19 era and have a discussion with representatives from 10 ASEAN counties and Korea.

During the masterclass section, Lee Dong-ha, CEO of Korean film company Red Peter, will give a lecture about how his firm created movies like “Train to Busan” and “Peninsula,” which were also successful in ASEAN countries. He will talk in detail about the process of creating the film from the preproduction stage to how the company exported the film.