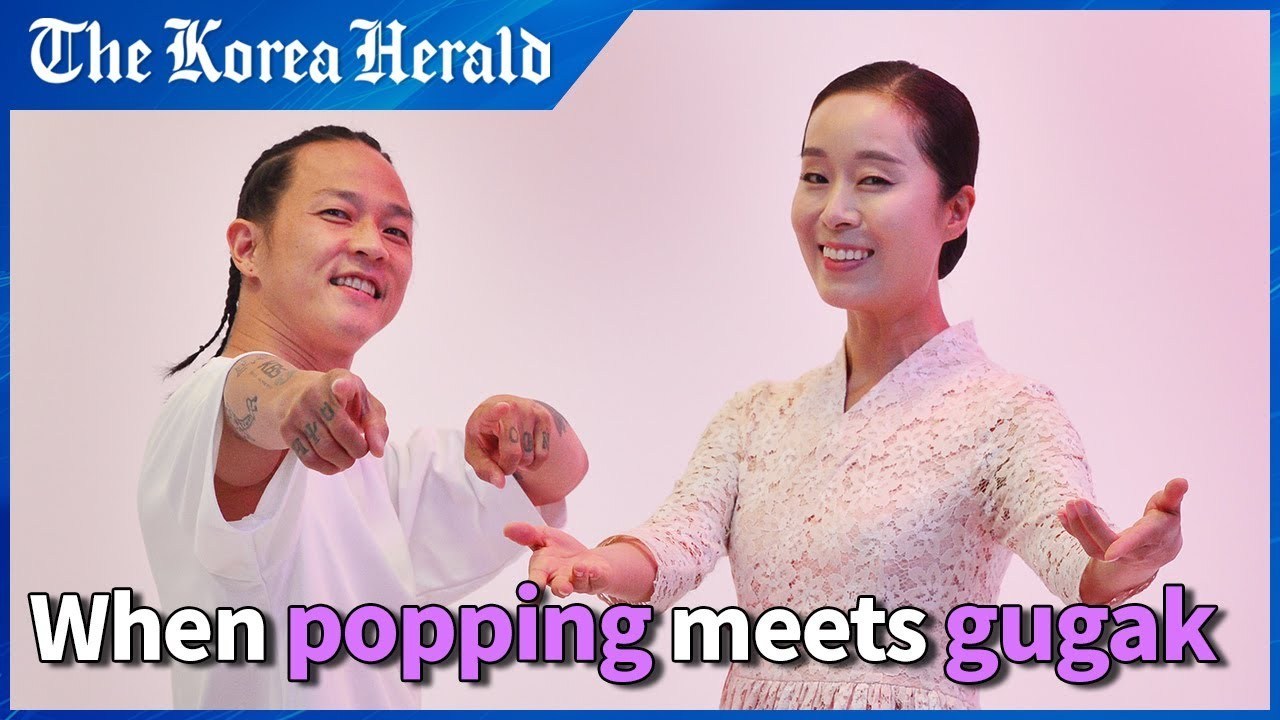 “Guess what came to mind last night when I heard a song at the cafe,” poppin’ dancer Nam Hyun-joon chattered away with gugak singer Park Ae-ri as they prepared for an interview at The Korea Herald’s studio on June 29. The two had arrived together. In fact, they’ve been married already 11 years.

Nam, 42, appeared in a white T-shirt and a trendy pair of sneakers while Park, two years older, wore an ivory-tone floral dress and a pair of heels. The cacophony created by the seemingly “too different” couple began to mix and then dissipate as the interview began.

More commonly known by his stage name “poppin’ Hyun-joon,” Nam had recently shown a spectacular performance on popular TV show “Voice King.” Dressed up as Batman‘s nemesis the Joker on stage, Nam expressed the ultimate isolation and loneliness of humankind with explosive dance movements together with his dance crew. Although he ultimately did not make it to the top 10, Nam’s performance deeply impressed the judges.

Meanwhile, Park is busy traveling to different parts of the country, performing at traditional and fusion gugak festivals year-round. When time permits, Park appears on TV as a way of communicating with young gugak musicians.

She thinks it is her mission to pave the way for emerging gugak singers who have the skills and talent but do not know how to maintain their “sori” -- one’s singing voice in traditional music -- as their venues grow fewer.

Although the two had worked in completely different fields with “music” as the sole commonality, their love and passion for what they do perhaps led them to each other.

“Meeting Ae-ri at a rehearsal stage, I fell in love with everything about her, from the way she walked to the way she talked,” Nam said, recalling the first encounter with Park for a duet in a new performance. Unlike Nam who recalls the moment as “love at first sight,” Park did not have special feelings for Nam. But after being asked out on several dates and listening to his life story, she felt they clicked.

As a youngster, Nam had dreamed of becoming a painter. However, circumstances would not allow him to pursue his dream. Nam’s parents abandoned him in 1995 after his father went bankrupt. Living on the streets as a broke 15-year-old, dancing protected Nam from being bullied or teased by strangers.

“People ask me today if I had that initial spark the moment dance became my dream. But for me, dancing was equal to the act of breathing,” Nam said, explaining how he started street dancing as a survival strategy.

There were moments when he wanted to give up dancing and seek other ways to earn a steady living. In those moments, Nam was lucky to meet people that supported him, he said. Lee Ju-no, a member of Seotaiji and Boys, was one of the mentors who gave him shelter and a practice studio. “It’s obvious that people die if they do not breathe, right? Dancing has been the same for me, with or without music, a thing I couldn‘t live without.”

For Park, who joined the National Changgeuk Company of Korea in 1995, the spark came at the age of 9. “I went to watch a pansori performance, heard sori right in front of me and immediately thought to myself, ‘That is what I want to do for the rest of my life,’” said Park. Listening to pansori, Park felt warmth and comfort. “Looking back, it sounds pretty funny that a child could think that way, but I was very determined and confident at the time.”

Ever since that day, she has paved her way with gugak as her soulmate. In 2019, she received the presidential award for best performance at a gugak contest.

At the peak of her career, Park faced a huge slump and was on the verge of losing her voice. Her mentors and fellow gugak musicians said that she might not be able to continue. “For someone with my personality, getting over a slump requires twice the effort. However, when I look at Hyun-joon, he never minds about mistakes and failures on shows. That’s the spirit I most respect and am envious of as a performer.”

Asked how the two get along so well despite such personality differences, Nam answered with confidence. “We are artists who perform, so we naturally think about music and performance in daily routines. While waking up in the middle of sleep, brushing teeth and even while preparing for our day early in the morning.”

He described how the two endlessly have conversations, chasing each other around at home to get feedback and ideas. “I never hide my emotions, and share the frustrating and exciting moments on the stage,” Park said. She added how emotions easily burst out while at home with Nam after a long day, and the two share the most intimate stories about music and their performances.

The couple said that duet performances that mix pansori with poppin’ dance come to life mostly in their living room and kitchen. Nam’s firm belief that the peak of artistic work comes from spontaneity and improvisation combined with Park’s delicate and perfectionist approach to gugak together make for a performance that breaks conventions yet adheres to tradition, giving a fresh impact to the audience.

Recently, the couple’s daughter’s homework required her to present the family motto in class. “Thanks to Ye-sul’s homework, we had a serious discussion and came up with our own. It goes, ‘It‘s hard, hard indeed. But there’s no easy thing in the world.’”

Ye-sul’s homework is done, but the family motto is a work in progress for the couple who are preparing to work on more cross-genre performances, taking risks and overcoming difficulties.