She has banking service apps on her smartphone that can process the payment in a second, but she feels more comfortable with paying the bills offline -- not to mention the free coffee and friendly conversation with bank clerks.

“Staff at the bank taught me how to use mobile banking services, but it still seems complicated to register personal authentication certificates on the mobile application or apply for mobile-only financial programs,” she said.

Yang is one of many in the rapidly graying population who still relies heavily on offline bank operations in South Korea, the world’s most wired country currently undergoing a massive financial digitalization.

Digital banking penetration of Asia’s fourth-largest economy is on a par with that of New Zealand at 99 percent as of 2018. It is the highest figure among advanced Asian countries, including Japan and China, which posted 77 percent and 84 percent, respectively, according to McKinsey’s report titled “Asia Banking in the Digital Consumer Age.”

But for many seniors born before and after the 1950-53 Korean War, parking their money upon recommendation by bank clerks seem to be safer then tapping yes or no buttons on mobile phones. 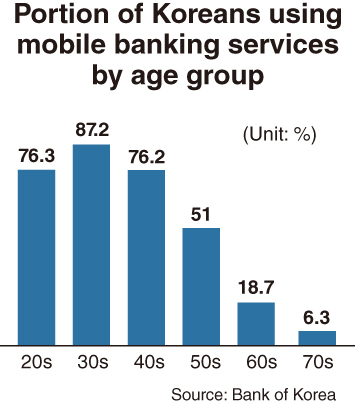 According to a survey conducted by the Bank of Korea in 2018, merely 6.3 percent of respondents aged over 70 had made financial transactions via commercial banks’ mobile applications in the past three months, which was far below the respective 87 percent and 76.2 percent of people in their 30s and 40s.

Subscribers aged 60 or above of the nation’s internet-only banks, including KakaoBank and K bank, accounted for 3 percent of the total on average, according to Rep. Yoo Dong-soo of the ruling Democratic Party, quoting data from the two lenders.

Despite a reluctance among seniors to embrace digitalization, the country’s major commercial banks shuttered scores of outposts last year as part of digital innovation plans.

The number of physical bank branches decreased by 304 to 6,405, data from the Korea Federation of Banks showed. Most of the branch closures occurred in the capital area and metropolitan cities.

“That way I feel relieved, but I feel like losing out on opportunities to invest in more profitable product.”

Some seniors are calling for a soft landing of digital transformation in the finance industry.

Kim Hong-kwan, a former financier in his late 60s, who worked at Woori Financial Group for more than 30 years, recently became the so-called “digital finance teacher” for senior citizens unfamiliar with both internet and mobile banking services.

“I’ve been teaching people aged between 65 and 80 on how to use local lenders’ digital banking services since May last year via Zoom. With concerns over financial scams targeting the elderly, many are reluctant to make financial transactions via their smartphones,” he said.

After retirement, Kim began to serve as an expert instructor at the nonprofit Financial Education Council. The organization launched educational programs for older adults in May last year, financed by the Credit Card Fund, with the purpose of narrowing a digital divide, or a knowledge gap between younger and older generations in the finance industry as banks expand innovation in digital finance.

“The thing is, even after taking my lectures, elderly people still find it difficult to activate mobile banking applications on their own and resort to visiting nearby brick-and-mortar branches or automated teller machine transactions,” Kim said.

“The ongoing digital transformation in financial circles is inevitable, but it takes time for the elderly to adapt to the rapidly changing financial environment. Local lenders at least need to slow down the pace of closing down ATMs,” he added.

As part of its efforts to help seniors adapt to digital trends and technologies in the financial sector, the policymaking Financial Services Commission last year announced a comprehensive policy framework, including guidelines that advise local banks to address their difficulties when using the banks’ mobile applications and websites.

They are also offering mobile-based educational materials that inform senior customers of their new banking services as well as methods of applying for contactless financial programs.

“Placing bank clerks in charge of offering digital education for senior citizens at offline bank branches could be an option,” said Byun Hae-won, a researcher at the Korea Insurance Research Institute.

“In partnership with the local governments as well as nonprofit educational institutions, the financial regulator and related government agencies should nurture qualified instructors for senior digital education, while increasing spending on related educational programs.”