The group’s second English-language single, “Butter” is an upbeat dance pop anthem with a seasonal vibe, peppered with dazzling synths and an infectious hook. The seven-piece act held an offline global press conference in Seoul on Friday evening, right after the song’s release, where the musicians talked about the new single, their future plans and the power of music.

“Actually, the song doesn’t deliver some kind of in-depth message. Rather, it’s an adorable, easy-on-the-ears love song that delivers a sweet message of ‘I’ll melt your heart into two, smooth like butter,’” Jimin explained.

Co-written by RM, “Butter” was produced by a team of global songwriters such as Rob Grimaldi, Stephen Kirk, Ron Perry, Jenna Andrews, Alex Bilowitz and Sebastian Garcia. Living up to the anticipation ahead of its release, “Butter” features dynamic choreography as well as some visually striking style changes for a few of the band members. V got a perm, which his bandmates referred to as a “poodle style,” while J-Hope dyed his hair a vivid yellow in keeping with the song’s title.

“In the music video for ‘Butter,’ there’s a scene where all seven of us dance within an elevator in our own free style, which was done spontaneously. People will be able to enjoy the individual charms of each member,” said V.

All looking clean-cut in suits, the bandmates didn’t forget to update reporters on their whereabouts. Suga, who couldn’t attend the press event for the group’s previous “BE” album because of a shoulder injury, said he’d pretty much recovered after focusing on rehab exercises. Jin and RM said they’d been working out to gain physical strength.

RM and Suga went on to share a story of how they’d competed with each other to write the song’s rap parts. “When we received the song, we felt that its rap part needed some arrangement that could match our own styles. So me, Suga and J-Hope got to participate in rewriting the verses. It was a competition, and I got lucky enough to get selected,” said RM.

Suga jokingly chimed in. “We always compete with each other when it comes to songwriting. I’d actually studied English in order to write for ‘Butter,’ since it’s an English song, but yeah, I failed mercilessly.”

Suga, who’s earned the nickname “Minstradamus” for his uncanny talent for predicting the group’s future achievements, shared the group’s goals for “Butter.” “We would like to -- actually, we will -- win No. 1 on the Billboard Hot 100 with ‘Butter.’ Moreover, we will vie for the Grammys again with ‘Butter.’ We hope to yield a good result,” he said. BTS earned the No. 1 spot on the highly competitive chart last year with “Dynamite.” 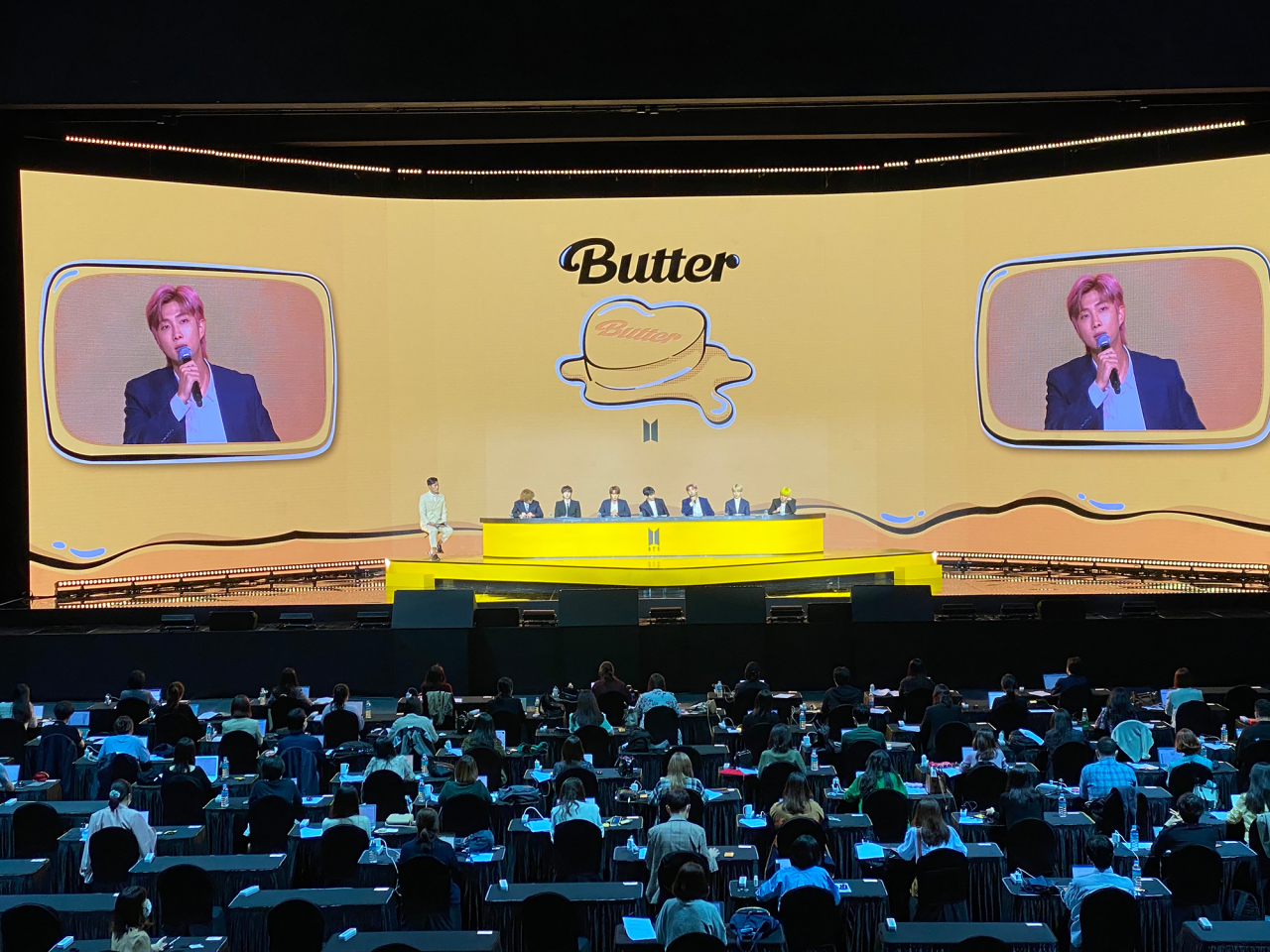 With their eighth anniversary coming up next month, the BTS musicians seemed to have thought deeply about their future, all the more after riding out a pandemic that has halted concerts and offline events.

“For the last six months, we’ve actually contemplated a lot on our group’s future, how we should continue our relationship with fans and how we should satisfy them with new sides of us. Since we wanted to keep showcasing our good sides, I had lots of worries,” said Jimin.

RM said, “Our biggest concern is, obviously, our future. What would be our function in this new-normal era? What’s the meaning of our existence? For whom do we do music? What’s as important as the Grammys is how we are going to realize our value and remain meaningful.”

V added, “It’s a meaningful eighth anniversary but it’s a shame in part. We have the Festa upcoming for Armys but it’ll be done online. Plus, there’re many stages that we couldn’t share. It’s sad that so many events are held without Armys on-site. But still, we’ll try our best.”

It’s been a roller coaster of a year, but the core values remained intact for the group: the power of music and their sincerity.

“Music was at the center of everything. It was the breakthrough in difficult and anxious times and what brought us all the happy moments. We really felt the huge power of music. I hope to make more music like that and spread the good energy to others,” said J-Hope.

RM continued, “From our debut days, we’ve always held meetings with our company to convey our own thoughts and feelings ahead of making new albums, which was our effort to find a balance between what we wanted to express and catching what listeners wanted from us. And we came to the conclusion that every single song we’ve released, including ‘Butter’ and upcoming projects, has been, and will be, our best answer at the moment.”

“There was a time when I performed in front of only two people when I started music back in my hometown, Daegu,” added Suga. “It was the moment I realized that I should do music for those who listen to my music. I’ve experienced how much it hurts to do music listened to by no one, and now that we are receiving so much love, doing music for our fans is quite obvious for me. I think that’s what musicians should do.”

BTS is set to perform “Butter” onstage for the first time on May 23 at the 2021 Billboard Music Awards, where the band has been nominated for top duo/group, top song sales artist, top social artist and top selling song.