[CRYPTO FEVER] Amid mix of concern and hope, retail investors back on crypto rollercoaster 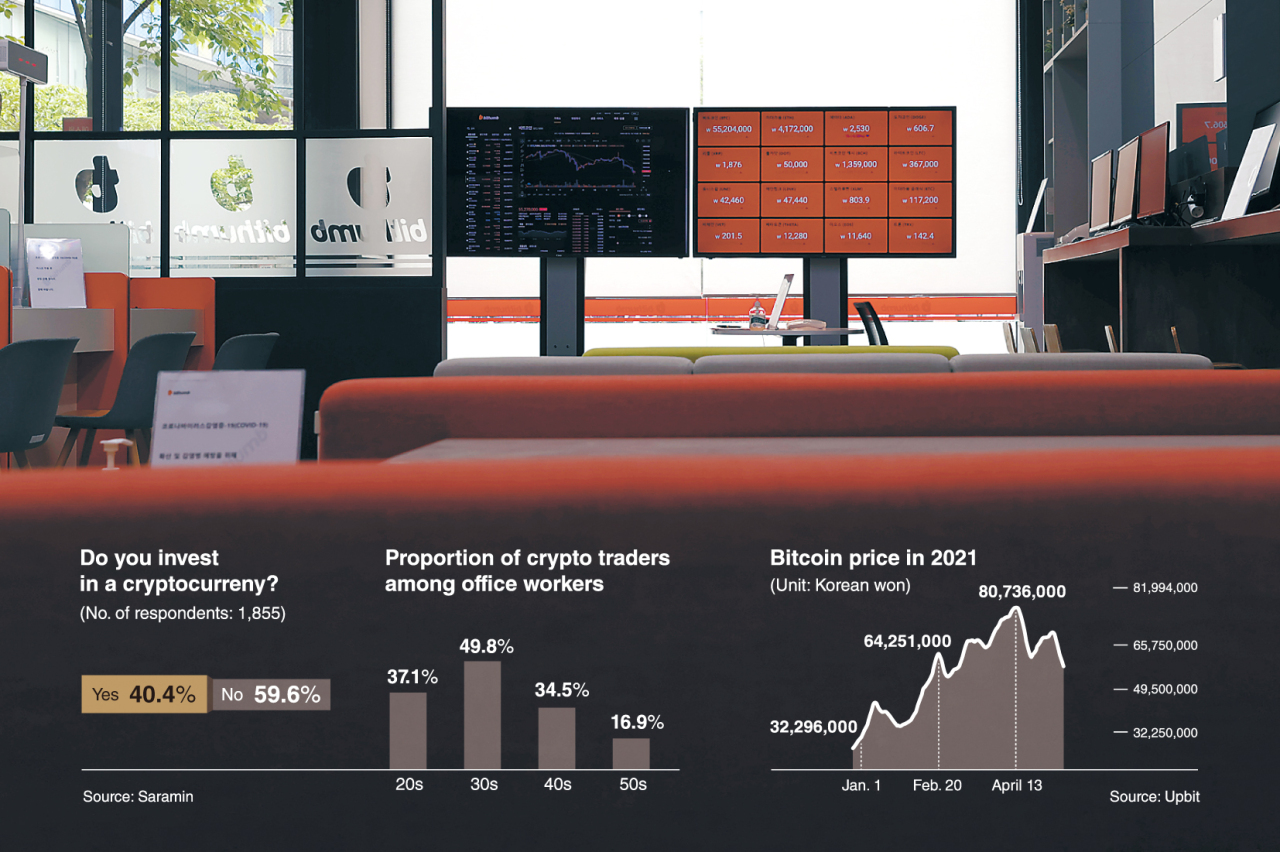 This is a part of a series of reports, analyses and interviews on the cryptocurrency market and its future. This is the first installment. -- Ed.


After the crypto market crashed in 2018, Lee Ji-hoon, a 35-year-old office worker, kept his distance. But amid the recent market frenzy surrounding cryptocurrencies, Lee felt the urge to reopen an account he had nearly forgotten about for three years. As soon as the account was reopened at Bithumb’s offline customer center last week, he was immediately taken aback by the astonishing numbers: The tiny piece of a bitcoin he held, 0.0003, was now worth around 20,000 won ($17.73). A mere 188 won worth of Bitcoin had yielded a 10,540 percent profit.

“I wish I had bought more in the past couple of years,” said Lee. “I am back in the game now.”

Lee is one of many amateur investors in South Korea returning to the crypto market with a mix of concern over its risky nature and hopes of hitting the jackpot.

As digital coin prices break records, it is not only the economically active population in their 30s and 40s but a wide range of people rushing back to the crypto sector.

It is not the first time that investors have chosen to take the crypto roller coaster ride despite fears of a sudden market crash.

The crypto market enjoyed a brief boom in 2017 but the bubble burst the following year, leaving retail investors no choice but to abandon the market until late last year.

As a result, local crypto exchanges struggled as their profit nose-dived to record lows.

But now, with a better understanding of crypto assets, some retail investors even enjoy their volatility.

A 40-year-old individual investor surnamed Hyun recently sold all of his stocks, worth around 500 million won, and bet on Ethereum and other altcoins, a blanket term used to refer to coins other than Bitcoin.

“Stocks in both Korean and US markets have shown lackluster performance since late last year, and the ROI from the stock markets has been disappointingly low, compared to the crypto market,” said Hyun. “I do not think I would move my assets back to the stock markets.”

“Some altcoins I have jump 100 percent overnight, so a 10-20 percent price change is almost nothing,” he said.

Michelle Kim, a 40-year-old office worker, said she felt numb about her “inadequate” 10 percent to 20 percent gains in the stock market and had decided to engage in heavily leveraged margin investing in cryptocurrencies.

“I shorted Ethereum when it was moving up in a several-day rally. I poured in my savings hoping that the price would go down eventually,” she said.

As the price went up, she needed more margin deposits and injected her savings for four days but the rally wouldn’t stop.

“That one mistake in positioning costs me $12,000,” she said. “But I cannot stop thinking about what if I longed Ethereum instead of shorting it, I would have made more than $10,000 with just $2,000 of investment.”

In response to digital coin investment by their employees, several local banks -- including KB Kookmin, Woori and KEB Hana -- have issued warnings to refrain from spending too much time on cryptocurrency trading, saying it could have a negative impact on work quality.

Woori Bank, for instance, banned investing during working hours and boasting about profits to colleagues.

The fear of missing out and the jackpot-seeking mindset have spread to older investors too.

According to Rep. Kwon Eun-hee of the People Party, of the 23.7 million new accounts with the four largest cryptocurrency exchanges, Upbit, Bithumb, Coinone and Korbit, 276,945 belong to people aged 50 and above. People in their 60s and 70s deposited 407 billion won, or an average of 71.1 million won per person. This is twice as much as the overall average of 35.4 million won.

Older investors, who often are not as familiar with digital technology as younger people, sometimes fall victim to scams. An increasing number of pyramid schemes attempt to attract older investors online and offline by guaranteeing high returns, according to local media reports.

For some experts, who see no intrinsic value in crypto assets, the latest crypto frenzy reminds them of walking on thin ice.

“I am extremely worried about the latest crypto fad, especially those who have been obsessed with hitting the jackpot via crypto investment,” said Lim Jong-in, the dean of the Graduate School of Information Security at Korea University. “Investing in crypto currencies, which have not received a legal currency status, could deal a serious financial blow to individual investors.

“Since crypto currencies are also used in crimes, such as money laundering and drug trafficking, there could be global restrictions led by the US government or United Nations down the road,” the professor said.

Cryptocurrency transactions around the world increased to 3.8 trillion in March, up nearly 30 percent from the previous month, according to global market research firm CryptoCompare.

Among local exchanges, Upbit, Bithumb, Coinone and Korbit have received a BB rating, the third-highest in CryptoCompare’s eight-class evaluation system.