[Herald Interview] American Manganese on lookout for opportunities in Korea

American Manganese, a Vancouver-based critical metals company, is seeking to tap into the South Korean battery market with its exclusive technology to extract key metals from defective batteries.

In an interview with The Korea Herald, its chief executive officer Larry Reaugh and chief technology officer Zarko Meseldzija revealed that the firm is in talks with multiple companies for partnership in Korea, home to three of the world’s leading lithium-ion battery makers.

“We are thinking about licensing or joint development,” said Meseldzija, the CTO, although declining to provide specific names due to non-disclosure agreements.

In what appears to be a related move, the company is currently finalizing the registration of its core battery recycling technology with the Korean Intellectual Property Office. The firm received a notice of allowance in March from the patent office, which indicates that the given technology has cleared the office’s vetting process and is ready to be issued a patent.

In South Korea, industry leader LG Energy Solution will send defective batteries to Posco’s recycling facilities to be set up Poland and in Korea. Poland is LGES’ production base for Europe. According to sources with the knowledge of the deal, Posco will grind up defective batteries into fine powder to extract critical metals such as nickel, cobalt and manganese from it.

In the lithium-ion battery field where defect rates during the manufacturing process tend to be high, mining valuable materials from defective products should be a necessity, the company said.

At Tesla, from 2017 to 2019, about 39 percent of electric vehicle batteries manufactured at its Gigafactory 1 in Nevada were defective. Through years of optimization, LGES’ 70 gigawatt-hour battery factory in Poland recently managed to reach yield rate over 90 percent, which means around 10 percent of what’s produced there are still being thrown away.

American Manganese executives said their solution is a logical and economical answer to the issue.

“To me, this is just another mining project. If you don’t come up with proper solutions before you go into (battery) production, you won’t stay in the production,” CEO Reaugh said.

Meseldzija added: “Imagine you have a battery manufacturing facility, and it’s producing maybe 10-20 percent of scraps from their process. That’s an opportunity to integrate a recycling process within that facility and recycle them directly back to high-quality materials that can be used for remanufacturing of batteries.”

Lithium-ion batteries, defective or not, contain cathodes which are made of expensive metals such as nickel and cobalt and account for 25 percent of the cost of a whole battery.

American Manganese claims it can extract metals inside cathodes 99.7 percent with 99.9 percent purity. 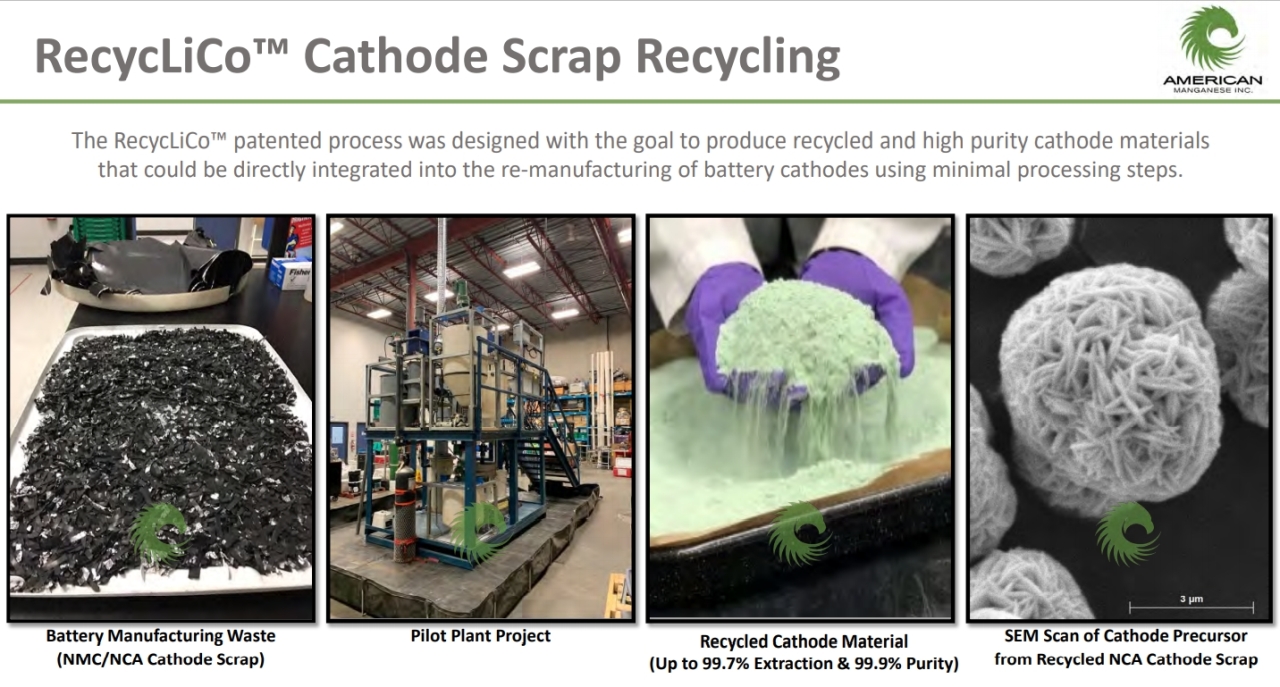 Conventional recycling method involves physically shredding and smelting batteries with high heat, which requires fossil fuels and therefore generates about 2 metric tons of carbon dioxide per ton of metal. It can also only retrieve around 40-60 percent of nickel and cobalt and can’t recover lithium at all.

American Manganese uses a more effective method by dipping cathode scraps inside acid in a closed-loop system. After six to seven cycles, lithium and metals inside cathodes are retrieved almost 100 percent.

According to Meseldzija, a 10 gigawatt-hour battery plant spends $271 million on cathode materials annually. Assuming the plant’s yield rate is 90 percent, 10 percent or $27.1 million would be lost. By building American Manganese’s recycling facility -- worth $15-20 million -- that can process 5 tons of cathodes per day, millions of dollars can be salvaged, he claims. 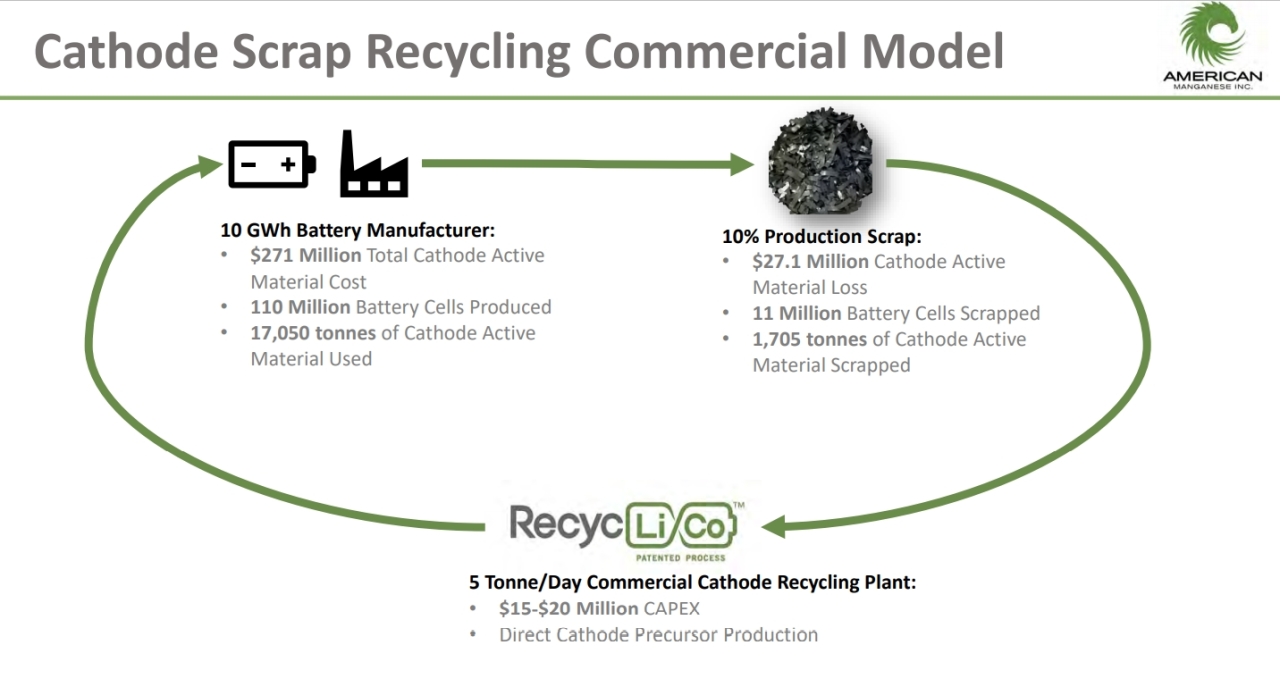 In March, American Manganese signed an agreement with EV battery startup Italvolt to develop a commercial recycling plant alongside the Milan-based company’s 45 gigawatt-hour Gigafactory in Scarmagno, Italy, set for completion in 2024.

Aside from economic reasons, protectionist policies and environmental regulations can nudge battery manufacturers to integrate a recycling system within their factories, the company executives added.

“When you look at the policies and new legislation coming in place in North America and Europe, there are going to be protectionist policies (as witnessed by) US President Joe Biden and (his emphasis on) the critical material supply. Those supplies will be avoided, or there’s going to be a policy that prevents them from being shipped outside of certain jurisdictions,” the CTO said.

Meseldzija pointed to Tesla who decided to build a recycling facility at its Shanghai factory last month. The facility will reproduce key components such as battery cells to reduce the impact of its products and operations on the environment, as China is also adding rules to encourage electric vehicle makers to recycle essential components.

Meanwhile, SK Innovation, a local battery maker, claims to have developed an independent technology that works similarly to that of American Manganese’s. SKI says the technology can retrieve lithium and critical metals inside cathodes over 99 percent.

On April 29, the firm signed an agreement with automaker Kia to collect spent batteries from its electric vehicles and extract key metals to reuse them for the manufacturing of new batteries. SKI did not specify if it will use its own technology or borrow a third-party expertise for it. It is also unclear whether the deal involves construction of a new recycling facility to be directly run by SKI.