A look beneath the surface, however, reveals the local firms’ precarious position in an industry still facing huge uncertainties, ranging from the supply of key raw materials to the future directions of technological innovations.

Cobalt, a key component in lithium-ion batteries, offers one way to understand the vulnerability of South Korea’s global battery expansion. It is often described by officials here with the term K-battery, in the hopes that it would follow the success of Korea’s more globally popular products like K-pop and K-dramas.


Much of the world’s supply of cobalt comes from the politically unstable Democratic Republic of Congo, and most of that supply is controlled by China.

In 2019, more than 70 percent of the 140,000 metric tons of the metal mined globally came from the DRC, and eight of the 14 largest cobalt miners in the country were Chinese-owned, accounting for almost half of the country’s output. 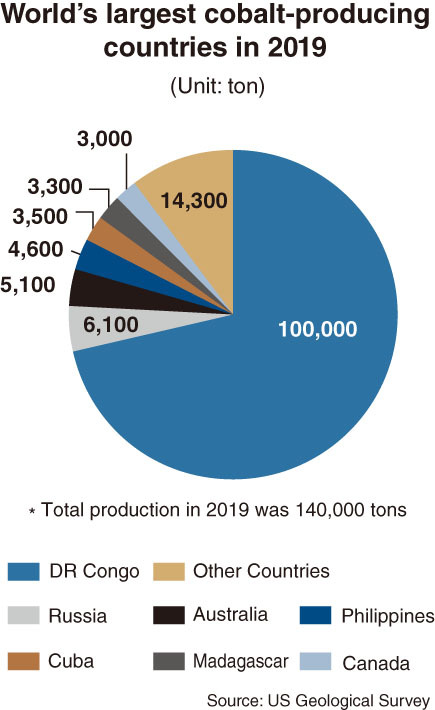 This control of Congolese cobalt has allowed China to consistently control over 60 percent of global cobalt supply. Most importantly, it’s China that refines 80 percent of the world’s mined cobalt, according to OECD’s 2019 report.

Berlin-based consultancy Energy Brainpool says that the Chinese hegemony over cobalt has triggered price hikes and supply risks of the strategic material in recent years, sending ripples to lithium-ion battery makers, who consume 40 percent of the world’s cobalt supply.

The catch is, China gets to choose who to supply cobalt to first, as the cobalt market will remain a supplier’s market rather than a demand-led one. By 2026, the global cobalt demand will grow to 225,000 tons per year, but supply will only increase to 222,100, creating a supply shortage of 2,900 tons.

For South Korea, the situation is worrisome, as China can use the supply shortage and potentially prioritize the supply of cobalt to Chinese battery firms such CATL and BYD. The strategy could limit the growth of LG Energy Solution, Samsung SDI and SK Innovation, the top three Korean battery firms who together controlled 34.7 percent of the global electric vehicle battery market last year.

Experts agree that China could use its cobalt access as a weapon against Korea if things turn bad, just like it did to Japan with rare earth metals in 2010.

“China surely has the initiative, and is capable of shaking up the (cobalt) supply chain just like it did with rare earth elements, but now is not the right time to make the move,” said Han Jae-jin, a senior fellow at Hyundai Research Institute.

“If Korea shows any signs of siding with the United States (in the ongoing US-China trade war), then China could tighten its grip on the cobalt supply as a diplomatic card.”

Han said China has a track record of punishing Korea’s battery industry over diplomatic issues. In 2016, when Korea decided to deploy a US-led missile defense system called THAAD on the Korean Peninsula, China, viewing it as a threat to the mainland, responded in economic retaliation against Korea.

Right now, things have become more complicated and with the trade war going on with the US, China would have to weigh more carefully the consequences of such a hostile action using cobalt as a weapon, Han said.

“Korea has a certain level of leverage over China because Korea has Samsung Electronics and the company’s chips. As the US and China are in a competition to secure chip supply chains, China can’t hurt Korea’s battery industry at a time when the White House invited Samsung Electronics to discuss ongoing automotive chip shortage,” Han said.

The US has recently made efforts to suppress China’s chip ambitions. Last May, Chinese state investors injected $2.2 billion into the country’s biggest chipmaker Semiconductor Manufacturing International Corp., or SMIC.

In December, the US added the Shanghai-based chip maker to a trade blacklist and imposed restrictions on suppliers from exporting equipment to due to concerns that the equipment may be diverted to “military end use.”

“The equipment required for manufacturing advanced chips are mostly made by American companies or their technologies. The export ban is the US attempt to nip China’s chip industry in the bud,” said Choi Jae-sung, professor of semiconductor equipment engineering at Far East University.


China’s cobalt monopoly is the result of decades of state-led investment and diplomacy, but South Korea, despite being poor in natural resources, has been sitting on its hands, experts point out. The situation is not very different with other essential raw materials.

Starting 2000, Beijing encouraged overseas foreign investment in developing countries, especially natural resources such as minerals. Then in 2013, as part of “Belt and Road” initiative, Beijing started injecting trillions of dollars into building channels between China and Africa and Europe. China won mining rights in cobalt mines in the DRC in exchange for rolling out infrastructure such as roads, highways and hospitals.

In January, China announced that it would write off $28 million in debt to the DRC, repayment of which were due by the end of 2020, and even provide $17 million in the name of financial support to help the DRC overcome the COVID-19 crisis.

“China’s decision to write off debts from the DRC and welcome the country as a new partner for the Belt and Road Initiative is likely to further drive cooperation between the two countries and incentivize more Chinese miners, like China Molybdenum, to make new investments into the Congolese copper and cobalt industry, increasing their ownership in local mines,” reads a report drawn up by UK-based consultancy Roskill. 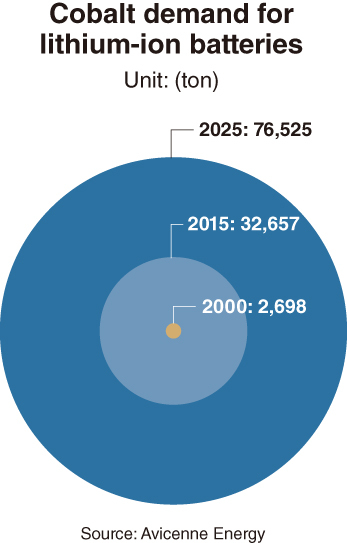 In contrast to China’s all-out efforts, Korea’s influence in Africa is almost non-existent.

The last time a high-ranking government official visited the DRC was in 2011, when former President Lee Myung-bak held a meeting with former President Joseph Kabila and discussed economic partnerships.

In 2019, former Foreign Minister Kang Kyung-wha made a weeklong trip to Africa and visited Ethiopia, Ghana and South Africa, but skipped the DRC.

South Korea’s lack of interest in the global race to secure key metals, minerals and other resources stemmed from a policy debacle during the 2008-2013 Lee Myung-bak administration.

During his five years in office, Lee poured in a total of 31 trillion won into overseas resources development projects. The state-run Korea Resources Corp. was his key vehicle for that.

The effort, however, received a harsh public criticism and was a breeding ground for corruption and irregularities. Many of the projects have also failed and the Korea Resources Corp.’s debt stood at 6.65 trillion won as of last year.

Now, the state-run agency only takes supportive roles and has recently liquidated its 30 percent stake in a copper mine in Chile at $154 million, failing to recoup an initial investment of $250 million made 10 years ago. The government has put Korea Resources Corp.’s other assets up for sale -- a copper mine in Mexico, nickel and cobalt mines in Madagascar and a soft coal mine in Australia.

“At a time when raw materials prices are spiking, selling off core mines is an action that go against Korea‘s resource security. If we have to give up the overseas mines, we have to get the right price,” said Kang Chun-gu, professor of energy resource engineering at Inha Unversity.


China’s grip on cobalt is not a risk confined to Korean battery firms. It is a risk shared by all players in the battery and EV fields. 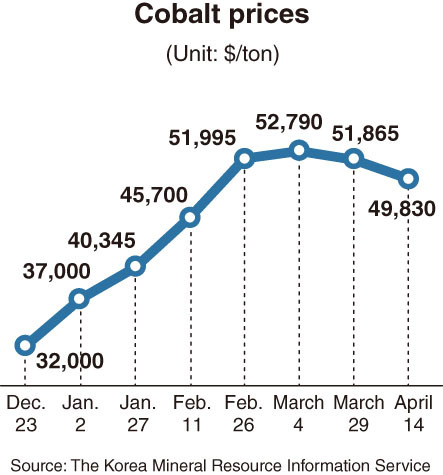 While cobalt demand for lithium-ion batteries is projected to only rise, from 136,000 tons in 2017 to 222,000 tons to 2025, according to consultant McKinsey, there are also underlying movements to grow out of the cobalt risk. They are to find an alternative source other than the DRC, make batteries that don’t require cobalt or reuse cobalt by recycling batteries.

In addition to these land-based reserves, there are 94 million tons of cobalt reserves in the deep sea. If these are added to the onshore reserves, there is enough cobalt to last until 2356.

However, there is a reason why global mining companies refrain from deep sea mining.

“Deep sea cobalt mining will take about 10 years to retrieve initial investments. Battery trends change really fast, and if new types of batteries that don’t require cobalt come out, the investments will be all for nothing,” an official from the Ministry of Oceans and Fisheries said.

Extensive research is already underway to develop batteries without cobalt. Last July, researchers of the University of Texas developed a lithium-ion battery that doesn’t use cobalt without sacrificing performance. The new battery only uses nickel, manganese and aluminum. Typically, eliminating cobalt shortens lithium-ion batteries’ lifespan and slows down charging time, but the researchers said they overcame the issues by finding an optimal combination of metals.

In December 2019, IBM Research announced that it has developed a new type of battery that outperforms lithium-ion batteries. The new battery is free from heavy metals like nickel and cobalt and is made of three materials sourced from seawater. These materials have never been used in combination in a battery before. IBM Research claims that the new battery is cheaper and more powerful than the current lithium-ion batteries.

For the time being, the battery industry is focusing on battery recycling technologies.

According to German research institute Hans-Bockler-Stiftung, battery recycling is getting increasing attention due to disputes on lithium-ion batteries’ environmental sustainability.

Pyrometallurgical process, which applies heat to extract and purify metals, enables direct recovery of metals and high productivity. The hydrometallurgical route, which utilizes water instead of heat, is highly selective and efficient with low emission of gases.

When two methods are combined, 100 percent of the cobalt can be retrieved from lithium-ion batteries in theory, according to the Hans-Bockler-Stiftung report.