An additional 4.5 trillion won is to be carried over from previously approved budgets for the current fiscal year, bringing the total relief package to 19.5 trillion won. To finance the budget, the country will issue an additional 9.9 trillion won in government bonds and harness 5.1 trillion won of surplus funds, according to the Ministry of Economy and Finance.

The government is doubling down on supporting ailing self-employed and small merchants ordered to suspend or cut down business hours as a part of social distancing measures amid their growing demand for compensation.

The latest extra budget, subject to parliamentary approval, aims to direct spending on small businesses left out of the three tranches of stimulus, protecting jobs and to fund COVID-19 vaccines and vaccination programs.

During a Cabinet meeting, President Moon Jae-in urged lawmakers to swiftly pass the budget, citing difficulties in the job market and for livelihoods building up over time due to the prolonged pandemic and extension of virus containment rules.

“This emergency cash handout, which is the largest among the four rounds of such programs, is carefully designed to support a broader scope of people suffering damages (from the coronavirus) with greater cash benefits,” he said. 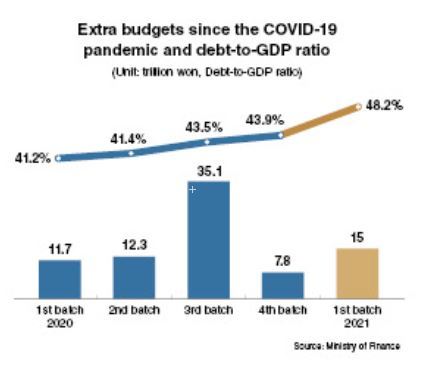 The largest portion of the relief package will be earmarked for cash handouts to small and medium-sized businesses hit by slumping sales, totaling 6.7 trillion won.

According to the finance minister, the number of people who will benefit from the 19.5 trillion-won relief package will stand at 6.9 million, up 2 million from those who received the third round of cash handouts.

About 40 percent of the latest package, or 8.1 trillion won, is planned to mainly go towards the cash handouts to businesses stricken by the government’s virus containment measures.

Up to 5 million won will be granted to businesses that have been subjected to assembly bans, such as indoor gyms, karaoke rooms and nighttime entertainment establishments.

Tourism and theater companies, whose industries saw an average 20 percent on-year drop in revenue last year, will be eligible to receive 2 million won.

About 2.8 trillion won will be earmarked to revive the labor market. Jobs in digital and tourism industries will be created for young workers, while women workers are expected to have more career opportunities in care and education sectors.

More than half of 4.1 trillion won earmarked to support antivirus efforts will be spent to buy COVID-19 vaccines and to fund the vaccination program, which began Friday.

After the ministry announced the plan, Finance Minister Hong Nam-ki expressed concerns over the country’s fiscal soundness via his Facebook page.

“I could not help but consider that if government spending increases, someone must pay the cost,” Hong wrote on his Facebook page.

With the extra budget, the country’s government debt is expected to reach 965.9 trillion won, up 9.9 trillion won from the amount calculated with the state budget for 2021. It also pushes the country’s debt-to-gross domestic product ratio to 48.2 percent from 39.8 percent before the pandemic started to sweep the nation.

“Korea’s debt-to-GDP ratio is still lower than the OECD average, but it is not a situation that can be relieved when seeing the growth pace of debt,” he said.

Average gross government debt in 2019 exceeded 100 percent of GDP across key currency-issuing OECD countries, but the remaining member states have maintained their ratios below 50 percent.

“It cannot be overlooked that fiscal spending can increase rapidly given that the country is experiencing a downward trend in the mid- to long-term growth rate, and an ultralow fertility rate coupled with the arrival of a superaged society,” the minister said.