NCT 127 unveiled the focus track from its forthcoming Japanese EP on Monday.

The song, titled “Gimme Gimme,” is a progressive hip-hop number and a direct statement from a guy in love. The video for “Gimme Gimme” will come out at 6 p.m. via the band’s YouTube channel, and the band will perform the song onstage for the first time at 10 p.m. Monday on the TBS music program “CDTV Live! Live!”

The EP, “Loveholic,” consists of six tracks: five new songs in Japanese and last year’s hit “Kick It,” the lead track from NCT 127’s second studio album in Korean. The band gave fans a taste of the mini-album in January, releasing “First Love,” one of the Japanese songs, in advance along with an old-school R&B tune.

The album goes on sale in Japan on Wednesday. The boy band is putting out a new album in Japan for the first time in about two years. Its first full album, “Awaken,” debuted at No. 4 on Japan’s Oricon Weekly Albums chart.

Under the title “Curated for ARMY,” the bandmates show off their creations one by one. It follows the series of rooms they put up for themselves in time for the release of “Be (Deluxe Edition)” in November last year.

In an audio guide that is available upon clicking one of the images, V explained: “I gifted a plant thinking what it would be like to put what I have at my home. It is free from ornaments or colors but catches the eye for some reason. The twigs are random but that seems to catch the eye … when you have worries, don’t think too much and be yourself and do what you want to do as the branches, and you will find yourself natural and beautiful.”

He also presented an LP turntable, adding that it would be nice to have friends over and listen to the music together.

It has been about 170 days since the upbeat pop tune was released. The song debuted at No. 13 on Billboard’s main singles chart, the Hot 100, the highest for a K-pop girl band so far. It was also touted by Rolling Stone magazine as last year’s best pop collaboration.

“Ice Cream” is the 10th Blackpink video to surpass 500 million views. “Ddu-du Ddu-du” is about to top 1.5 billion views, and “Kill This Love” and “Boombaya” respectively recorded over 1.2 billion and 1.1 billion views.

The group’s recent online concert, “The Show,” broadcast via YouTube, raked in over 1.17 billion won ($1 million) in 90 minutes. 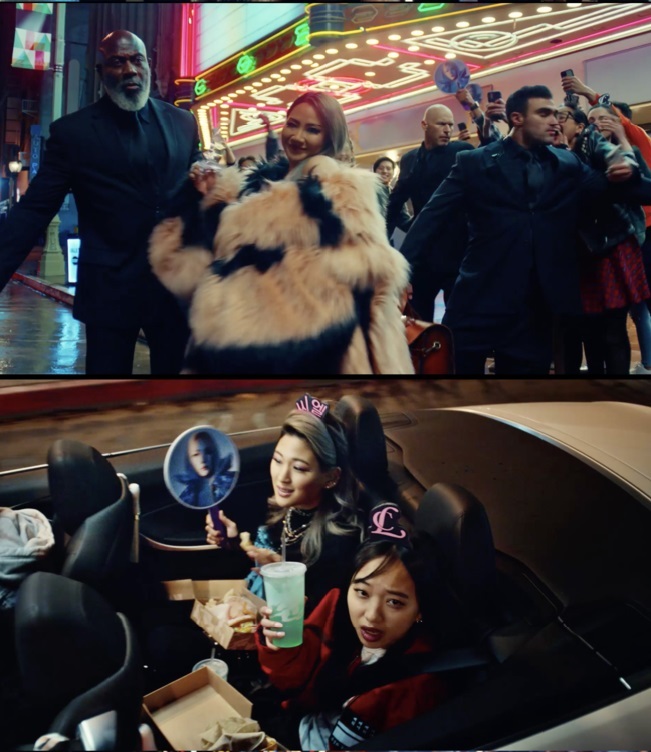 CL was featured in a TV commercial in the US, becoming the first female K-pop solo artist to do so.

The singer appeared in a Taco Bell ad that was first broadcast across the country on Sunday local time, alongside the likes of actor Noah Centineo, TikTok sensation Nava Rose, drag queen Onyx Black and BMXer Brad Simms.

She appears as herself, bundled up in a fur coat and escorted to her car by bodyguards past fans after a live performance. Fans wearing headbands bearing her name and holding fans with her picture spot CL and shout as they speed by in a sports car.

The former rapper and leader of four-piece act 2NE1 struck out on her own in 2013. Her US debut single, “Lifted,” entered Billboard’s Hot 100 (ranked at No. 94), a first for a South Korean solo female vocalist. She will come out with a new album titled “Alpha” in the first half of this year.