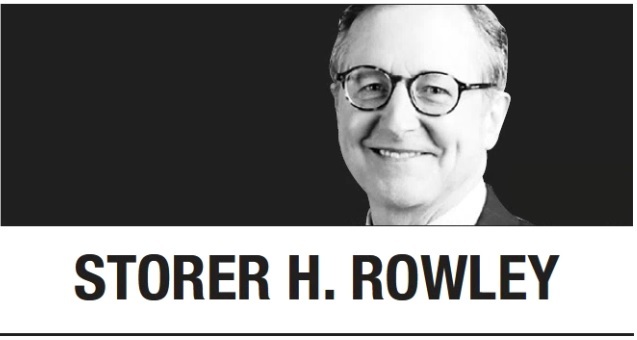 In the shadow of his predecessor’s impeachment trial, President Joe Biden is taking up the challenge of restoring America’s tarnished image in the world by making this case: The nation has survived an attack on its own democracy and actually emerged from it stronger, not weaker.

This may sound like a rationalization, given his presidency is living now with a violent, abusive partner in the domestic opposition, but Biden actually is smart to be tackling the GOP elephant in the room. Our friends and foes abroad can see clearly we need to get our own house in order before we start telling other nations what to do.

Only credible and effective policy can change public opinion at home and abroad. Even as he promised to move forward with hosting a “Summit of Democracy” early in his administration to rally other nations “to defend democracy globally,” he needed to acknowledge America’s low point on that score.

Biden has more foreign policy experience than any president since George H.W. Bush, and he demonstrated it in speeches with his clear recognition that foreign and domestic policy are inextricably linked. He understands the importance of framing US power on the basis of cherished American values supporting freedom, democracy, and human rights. He traveled to the State Department last week and the Pentagon Wednesday to lay down his marker that America and its diplomacy are back in the fight.

“Though many of these values have come under intense pressure in recent years, even pushed to the brink in the last few weeks,” the president said, “the American people are going to emerge from this moment stronger, more determined, and better equipped to unite the world in fighting to defend democracy because we have fought for it ourselves.”

To accomplish that goal, Biden is heeding Abraham Lincoln’s dictum that “public sentiment is everything” in trying to achieve a winning strategy. He is courting the US public for their buy-in. That’s a hard sell at a time when so many Americans supported his predecessor’s “America First” doctrine, which scolded allies, abandoned agreements, built walls, shunned immigrants, banned Muslims, and coddled dictators.

A Biden Doctrine of reengaging the world will need at least enough support on both sides of the aisle to be credible at home if it is to be successful abroad. The president rightly started making the case that America is restoring order in its own house.

He cited a list of steps his administration has already taken to “to live our democratic values at home,” overturning the travel ban that targeted Muslim-majority countries and the ban on transgender individuals in the military, restoring a commitment to truth and scientific facts, and underscoring support for the role of a free press in a healthy democracy as well as transparency and accountability in government.

Biden stated firmly that success abroad depends on healing America, starting with economic recovery and addressing “systematic racism and the scourge of white supremacy in our own country.” He acknowledged, “We’ll be a much more credible partner because of these efforts to shore up our foundations,” emphasizing that every action the US takes abroad must be taken “with American working families in mind.”

The foreign policies he outlined at the State Department were clear signals on this score. He said he will raise the cap on immigrant admissions, cut off support for Saudi Arabia’s military attacks in Yemen and halt the withdrawal of US troops from Germany. More pointedly he vowed to challenge authoritarian governments around the globe, and notably, confront Russia for trying to undermine US elections, China for its economic abuses, and Myanmar’s military for staging a coup.

But the symbolic nature of his speech was equally important. He told foreign service officers, staff, and diplomats he trusted them, had their backs, and supported their mission. He has brought a host of internationalist advisers back into his administration. The US diplomatic retreat from the world is over.

The US cannot foster a global order based on democratic principles when the American government faces persistent gridlock at home, bitter divisions, and acts of violence from domestic terrorists. Whatever the outcome, the Senate impeachment trial now underway is an essential step in exposing and facing the whole, unvarnished truth.

Biden already has called the leaders of America’s closest allies to pledge cooperation on issues such as COVID-19, economic recovery, immigration, climate change, and bolstering the NATO alliance. A good start, for sure.

But America’s power to influence the world by modeling liberal democracy and the rule of law has diminished. The US will need to bring more humility and collaboration as it seeks to take its seat at the global diplomatic table again. It must also deal with the millions of Americans who still believe Trump’s big lie that he actually won the Nov. 3 election.

Without truth and reconciliation at home, it will be hard for Biden to govern effectively, let alone to again project credible US policy, influence and leadership around the globe.