[News Focus] Population decreases in 15 of 17 regions of Korea

Furthermore, 15 of the country’s 17 major cities and provinces saw growth in the minus range, with only Sejong and Gyeonggi Province posting positive figures.

Seoul experienced the fastest population decline in the nation: The number of its residents dropped by 10,496 on-month to 9.65 million. Given the 9.73 million figure posted in January 2020, the capital’s population slid by more than 75,000 people in only a year.

Gyeonggi is continually absorbing households as families move from Seoul amid skyrocketing apartment prices in the capital, while Sejong is still expanding as the administrative city launched in July 2012.

Seoul was only 71.8 percent as populous as neighboring Gyeonggi Province, where at least 1 in 4 Koreans reside and whose population stands at 13.44 million. 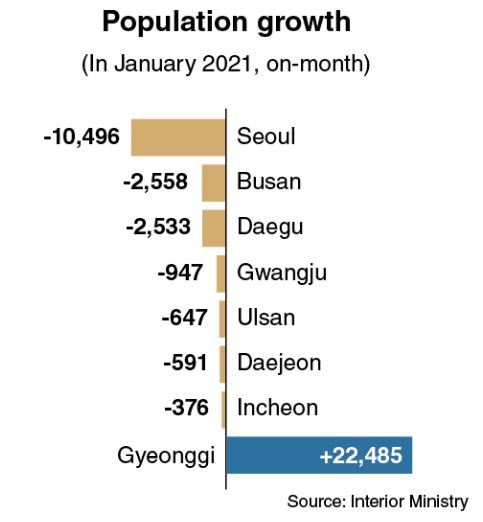 Across the nation, deaths outnumbered births with 25,799 deaths and 21,882 births during the month. The total fertility rate is at a record low at fewer than one child per woman over a lifetime.

While the nationwide gap between deaths and births was 3,917, other factors offset it somewhat, limiting the population decrease to 3,091 people. These included citizenship changes -- Koreans renouncing their citizenship and foreigners acquiring Korean citizenship -- and changes to the long-term residency status of Koreans overseas and foreign nationals here.

Among all age groups, those in their 50s accounted for the highest percentage of the total at 8.64 million. In contrast, there were only 3.94 million children under 10 and 4.78 million young people aged between 10 and 19.

The ministry data also showed that Korea, an aged society according to the stipulations of the United Nations, saw the people’s average age reach a historic high of 43.3 (42.1 for men and 44.4 for women).