According to the Justice Ministry and Statistics Korea, the unemployment rate for the expatriate population hit a record-high of 7.6 percent in 2020 since the government started compiling the data.

This contrasts with 5.5 percent in the jobless rate among foreigners in 2019, when 50,300 foreign residents were unemployed.

Data showed that the number of unemployed foreign residents increased by 19,200 in a year. The jobless rates for foreigners are based on December of each year or the yearly average or the latest available month.

The rate grew faster among women: While male expats’ jobless rate inched up from 5 percent to 6.1 percent during the 2019-2020 period, that of female expats surged by 4 percentage points from 6.6 percent to 10.6 percent exceeding the 10 percent mark for the first time.

Over the corresponding year, the number of unemployed women among foreign residents increased from 19,900 to 32,400.

A labor market researcher said that “COVID-19 dealt a blow both to Korean and foreign workers with both Korean women and foreign women being hit harder.” 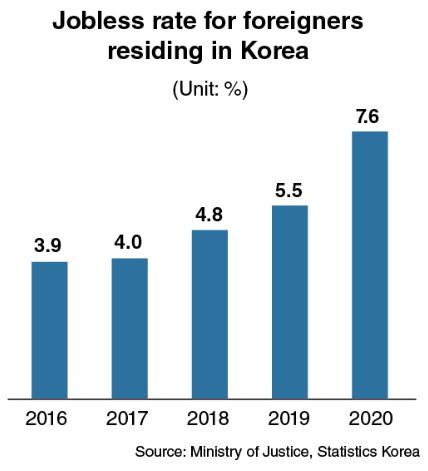 Meanwhile, data suggested that this was a continuation of a preexisting trend under the Moon Jae-in administration, which took office in May 2017.

The number of unemployed foreign residents has more than doubled since 2016, when it was 34,300.

Another core hiring index, the employment rate, showed a similar trend: The employment rate among foreign residents fell from 69.6 percent in 2016 to 63.7 percent in 2020. This was more serious among women, with the figure declining from 52.2 percent to 47.1 percent over the four-year period.

The deterioration in the hiring conditions for both Koreans and foreigners is seen from the Supplementary Index III for Employment compiled by Statistics Korea. The monthly index indicates “de facto” jobless Koreans.

The index regards “underemployed” people -- who work less than 36 hours a week and want to work more hours, as well as seasonal workers who are out of work for part of the year -- as unemployed.

The figure also posted above 10 percent in all months since President Moon took office in May 2017.

According to the index, the tally for de facto jobless Koreans came to 3.9 million as of November 2020, which is higher by about 1 million than 2.85 million in November 2016.

Should the Index III also be applied to foreigners, the de facto unemployment rate for them is likely to far exceed that of Koreans.

In 2020, the “official” jobless rates for foreigners and Koreans was 7.6 percent and 3.4 percent (as of November), respectively, both of which were calculated in a quite conservative manner -- excluding most underemployed from the calculation.