By Jung Min-kyung
Published : Dec 31, 2020 - 15:52       Updated : Dec 31, 2020 - 16:31
Despite heightened hopes that vaccinations would put an end to the still ongoing pandemic in the new year, the South Korean economy is expected to face another series of challenges, uncertainties and risks.

The COVID-19 pandemic was the biggest threat to Asia’s fourth-largest economy last year, dragging down its GDP in the second quarter to minus 3.3 percent, the lowest since the 1997-98 Asian Financial Crisis when the country went through massive restructuring nationwide.

Reflecting concerns, the Korean government on Dec. 17 revised its 2021 growth forecast downward from the previous 3.6 percent to 3.2 percent. At the same time, it lowered the corresponding figure for 2020 from the previous 0.1 percent growth to roughly 1 percent contraction.

State-run institutions, the Bank of Korea and the Korea Development Institute, both forecast some 3 percent growth for 2021, keeping pace with the government forecast. Global institutions, International Monetary Fund and the Organization for Economic Cooperation and Development, have forecast 2.9 percent and 2.8 percent growth, respectively. 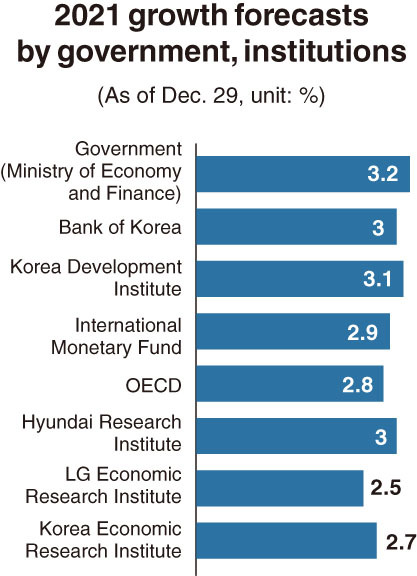 The government forecast has yet to reflect the latest third and deadliest coronavirus wave to date. Since mid-December, Korea’s daily COVID-19 cases have hovered around 1,000 for periods lasting more than a week. Some have already cited risks stemming from the resurgence of the virus here coupled with the toughened social distancing rules.

Despite the forecast of the Korean economy‘s slower-than-expected recovery, experts have pinned hopes on the fast recovery of the nation’s exports, the key driver for its growth.

The nation’s current account, a key barometer of the nation’s trade is projected to reach $63 billion in 2021, according to the Ministry of Economy and Finance, compared with the expected some $54 billion in 2020. The BOK and KDI projected $60 billion and $57.9 billion, while private institutions forecast an average $60 billion.

The Korea Trade-Investment Promotion Agency recently said it projects Korea’s exports to grow 6 to 7 percent on-year to a maximum of $550 billion next year.

Alongside vaccine hopes, the KDI on Monday expressed anticipation for improved trade and business ties with China in 2021. It cited Chinese President Xi Jinping’s possible visit to Korea and the recovery of the world’s second-largest economy, which accounts for more than a quarter of Korea’s outbound shipments. 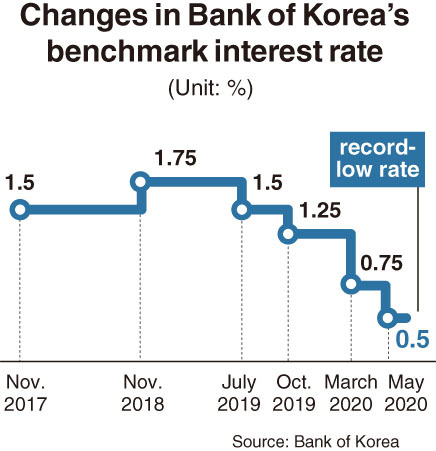 Considering the lingering uncertainty over the pandemic, the central bank, for its part, may have to slash the benchmark rate in the first quarter, according to some experts.

The Bank of Korea, since May, has frozen its policy rate at a historic low of 0.5 percent in a bid to minimize economic fallout from the pandemic.

The central bank may be left with no choice but to further cut its policy rate in 2021, they said, highlighting worries that the protracted COVID-19 crisis could further aggravate the nation‘s already reeling economy.

Under a scenario where the country implements strict lockdown measures in the first-quarter of 2021, the Bank of Korea may slash the rate to 0.25 percent in the period, according to a report released by British think tank Oxford Economics.

Sung Tae-yoon, an economics professor at Yonsei University said that an “additional base rate cut to 0.25 percent or less appears to be feasible” as the BOK would interpret improved economic indicators next year as a base effect of rate cut decisions in 2020.

The BOK’s latest decision to continue with a monetary easing policy in 2021 is adding weight to the global institution’s outlook.

“The local economy is forecast to show modest recovery, but economic uncertainties, including the virus spread and commercialization of the COVID-19 treatments and vaccines, still loom large,” the BOK said Friday in a report on its direction of its monetary policy in 2021.

“(The BOK) will maintain the easing stance of the benchmark interest rate to facilitate the economic recovery from the pandemic and ensure the rise in consumer prices to be stabilized at its long-term target of 2 percent.”

Regarding South Korea’s heated housing market, experts said it would continue to face a bumpy road ahead next year, due to the low interest rate environment coupled with jeonse shortages.

“The ultra-low rate environment has turned investors to seek higher profits from real estate investments amid ample liquidity, which was further increased by the government’s stimulus packages like the COVID-19 cash grants and loan programs,” said Cho Joo-hyun, professor of real estate science at Konkuk Univesity.

“The shortage of homes offered on jeonse triggered by the government’s tenant protection legislation, would continue to give a jolt to the property market.” Jeonse is a housing lease system unique to Korea whereby tenants pay a lump-sum deposit instead of monthly rent on a two-year contract.

The legislation, which allows tenants to unilaterally extend a two-year jeonse deal for another two years, passed the National Assembly in late July. This prompted landlords to withdraw their jeonse offers from the market causing the number of jeonse transactions to drop sharply, and in turn, raising apartment prices.

Meanwhile, the projected reduction in the number of new homes next year is expected to fuel the ongoing jeonse crisis, he added. About 270,000 new homes are set to be supplied across the country in 2021, down 26.5 percent from this year, according to housing information provider Real Estate 114.

Nearly 40 percent of 161 local real estate experts predicted that housing sales prices in Seoul and surrounding areas will rise 5 percent or higher next year, mainly due to the shortage of jeonse rental homes and new apartment units, a survey released by KB Financial Group said.

On the government’s decision to levy a heavier tax on those who own multiple homes in 2020, “the heavier taxation will have a limited impact on the overheated property market (in 2021 as well), unless the government addresses the ongoing shortage of jeonse homes,” said Shim Kyo-un, a professor of real estate studies at Konkuk Univesity.

Amid growing concerns over lingering economic uncertainty, experts say that the fast transformation of industries toward green and digitalization, paradoxically being pushed by the pandemic, could be a knight in shining armor.

They point to the possibility of Korea collaborating with the US in the areas of green technology, saying that it would provide fresh opportunities to companies in the export-reliant country.

US President-elect Joe Biden has an ambitious four-year climate plan worth some $2 trillion, focused on achieving net zero carbon emissions. The Korean government is seeking to cooperate with the Biden administration this year, in a bid to carry out a “win-win strategy” for its own 73.4 trillion ($62 billion) Green New Deal initiative, according to observers.

The Korean government plans to bolster cooperation in green areas including hydrogen vehicles, solar energy and fuel cell. The cooperation would help the local electric and hydrogen vehicle and renewable energy industries grow, but the traditional energy sector is likely to shrivel up. Biden’s investment in renewable energy is likely to push crude oil prices upwards, they added.

“With the US energy and green market projected to expand, this would open new opportunities for local businesses, especially in terms of increased demand for solar and wind energy,” Hong Jong-ho, an environment professor at Seoul National University said in a recent report released by the Korea Chamber of Commerce and Industry.

“South Korean businesses also need to brace for the spread of the RE100 global initiative and introduction of the carbon border tax,” he added.

Amid all concerns and anticipations for 2021, South Korea needs to keep an eye on the ongoing polarization of the economy caused by the pandemic. Efforts to bridge the gap are also crucial.

COVID-19 has dealt its harshest blow to low-income groups and industries that require face-to-face contact in all economies, the BOK said in a recent report. Small and medium-sized businesses and the self-employed in the services sector -- including travel businesses, accommodation, restaurants and retail -- have been affected the most by the pandemic. The tech sector, such as information and communication technology businesses, on the other hand, has been using the pandemic as an opportunity for further growth.