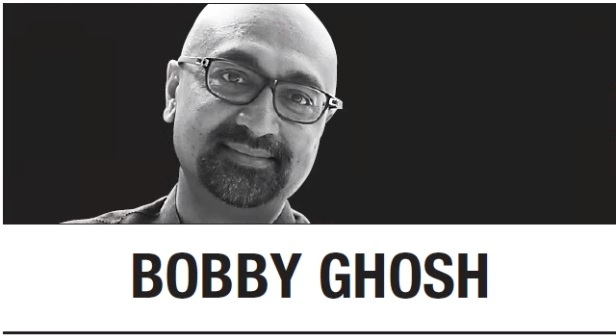 In the Persian version of the fable of the scorpion and the frog, the frog is replaced by a turtle, but the rest of the tale is familiar. The turtle is stung even as it is doing the scorpion a good turn -- ferrying it across a river -- and is told, by way of explanation, that this is merely an expression of the arachnid’s nature.

The moral of that tale may finally be dawning on European leaders who have been keeping the Islamic Republic from falling into the water for the past four years. Having received little gratitude from Tehran for their efforts to preserve the 2015 nuclear deal, they are now receiving fresh reminders of the Iranian regime’s true nature.

The Europeans’ tendency to soft-pedal Iran’s appalling human-rights record is being challenged by revelations that the regime has been kidnapping its critics from foreign soil, and bringing them back to Tehran for summary punishment. That the two most prominent cases involve critics who were based in Europe makes extending the benefit of the doubt to the regime that much harder.

In both instances, the targets were first lured out of the continent before being kidnapped. But for a reminder that Tehran is not above making mischief on European soil, consider the trial of an Iranian diplomat that started earlier this month in Antwerp. Prosecutors say Assadollah Assadi, who worked at the Iranian Embassy in Vienna, plotted a bomb attack against an opposition group in France. He handed the explosives over to a pair of Belgian-Iranians in Luxembourg, but was arrested in Germany, while making his way back to Austria.

The modus operandi in the more recent cases involved spies and smugglers, rather than diplomats. Ruhollah Zam, a Paris-based journalist whose exposes of corruption and sex scandals involving influential regime figures made him a threat to Tehran, was nabbed during a visit to the Iraqi holy city of Karbala, and spirited across the border. He was hanged last week, for the crime of “corruption on earth,” a charge the regime typically invokes when it is unable even to fabricate evidence of a real crime.

Habib Chaab, who was based in Sweden, was grabbed in Istanbul and transported to Iran, apparently by a drug trafficker. Turkish authorities have detained 11 people in connection with the abduction, and have fingered Iran’s intelligence service for financing the operation. Chaab is now in an Iranian prison, accused of involvement in a 2018 attack on a military parade in the southwestern city of Ahvaz.

The regime may also have employed gangsters to kidnap Iranian-German Jamshid Sharmahd from Dubai in July. Tehran claims Sharmahd, who was resident in California, of being a CIA agent and masterminding the 2008 bombing of a mosque in Shiraz.

The targeting of critics abroad, whether for assassination or abduction, represents a different order of threat from Tehran’s routine hostage-taking, in which the targets are frequently European-Iranian nationals. The European response has been sharper, too. Aside from the usual condemnations following Ruhollah Zam’s execution, ambassadors for Germany, France, Italy and Austria boycotted a forum meant to promote European-Iranian business ties. The French government’s tweet announcing the withdrawal included the hashtag #nobusinessasusual. In the US, Zam’s execution drew bipartisan fire: Secretary of State Mike Pompeo denounced it as “barbaric,” while Jake Sullivan, who is President-elect Joe Biden’s nominee for national security advisor, called it “horrifying.”

President Hassan Rouhani has shrugged off the outcry, but the abductions, and especially Zam’s fate, will hurt Iran’s standing among ordinary Europeans. Despite the regime’s efforts to rally sympathy for the hardships inflicted by the Trump administration’s economic sanctions, the Pew Research Center’s latest polling shows strongly negative views of Iran across the major European nations.

There are other signs that the Iranian wool is falling from European eyes. German Foreign Minister Heiko Maas recently signaled a shift toward the Trump administration’s negative position on the nuclear deal by suggesting the regime would need to agree on limitations to its missile-development program. Germany, France and Britain have issued a stern warning against Tehran’s plans to step up its uranium-enrichment program.

A clearer indication of European thinking about Iran’s behavior should come this week, when diplomats from the remaining signatories to the 2015 deal hold video meetings -- amid new signs of construction at an Iranian underground nuclear site.

A European reappraisal of Iran’s behavior would be in keeping with the twist to that old Persian fable: The turtle survives the sting, thanks to its impenetrable shell, but is wiser for the experience.