[Ivo Daalder] Europe’s problems will persist, even with Biden in White House 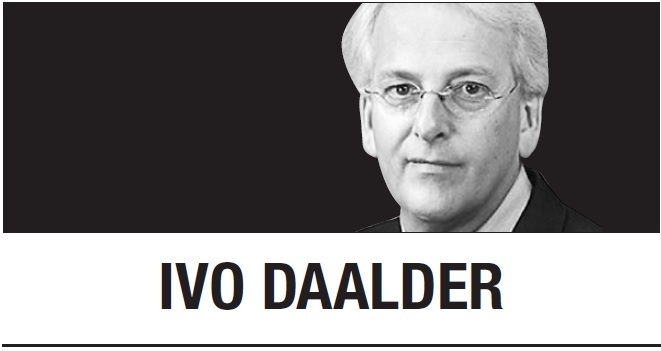 And it wasn’t just in France, but all over Europe that leaders welcomed the news that the White House would soon be occupied by someone who would want to work with them -- in contrast to Donald Trump, who had openly disdained the allies and declared the European Union a “foe.”

Biden is just what European allies had hoped for in an American leader. He is the most Atlanticist president at least since George H.W. Bush occupied the White House. And he has made clear that his “core belief,” as he put it when introducing his national security team, is that “America is strongest when it works with its allies.” Where Trump often felt most at ease in the company of autocratic strongmen, Biden has long believed in the need to work together with America’s democratic allies.

And, yet, for all the relief and elation, there are also deep concerns in Europe about the strength and durability of the trans-Atlantic relationship. Many worry that the most recent turn in American politics won’t be the last -- that just as Barack Obama was followed by Trump, so Biden might be followed by another American president uninterested in working with Europe. After all, more than 74 million Americans voted to give Trump a second term. Even with Biden’s victory, the future direction of American foreign policy is hardly assured.

That anxiety helps explain why the European Union has greeted Biden’s victory with a call on the United States to seize “a once-in-a-generation opportunity” and build a new agenda for global cooperation. The idea is to build enduring cooperation, which will be difficult to abandon, on a range of critical issues -- from dealing with COVID-19 and tackling climate change to setting common standards for digital technology and strengthening democracy and human rights.

On many of these issues, however, differences in perspective exist not just across the Atlantic but within Europe itself, which will make real and practical cooperation more difficult to achieve.

Take the question at the heart of the trans-Atlantic relationship: the common defense. Over the past few months, a major row has broken out between France and Germany, the two critical European players, over whether Europe should focus on strengthening its strategic autonomy (as Paris desires) or the trans-Atlantic link (as Berlin prefers). The fact that both want to increase European defense capabilities (which is where the primary US interest lies as well as of course their own) seems to have been lost in the debate.

Or take the issue that has caused so much tension with the United States over the past few years -- how to deal with a rising and increasingly assertive and nationalistic China. While some European countries have become increasingly concerned about Chinese behavior and accept the need to confront it over its human rights abuses and predatory economic behavior even if that entails increased economic costs, others have been reluctant to disrupt the lucrative markets for their advanced engineering and luxury goods. And a good number of European countries, especially in central and southeastern Europe, are increasingly reliant on Chinese infrastructure and other investments, making a turn toward confrontation often too costly.

Even on the issue that is supposed to unite the European Union with its partners across the Atlantic -- a commitment to democracy, the rule of law and human rights -- Europe is divided. Poland and Hungary, in particular, have increasingly embraced a new “illiberalism” -- from curtailing the independence of the judiciary and media to denigrating and undermining the rights of their LGBTQ citizens. Even as most of Europe is appalled, the EU has failed to counter it effectively -- as the latest anti-democratic moves in Hungary, further eroding minority rights and consolidating executive power, underscore.

None of this means that efforts to strengthen and deepen trans-Atlantic cooperation are misguided or useless. It matters greatly to have an American president and national security team who believe in their core that for America to prosper and be secure, it needs to work with its democratic allies. And the EU’s new trans-Atlantic agenda identifies many of the most important areas where the United States and Europe (and, I would add, Asian democracies) need to work together to get anything done.

Effective cooperation starts by identifying the issues that need to be addressed -- and these include those on the EU’s agenda: the pandemic, economic recovery, climate change, technology, trade, democracy and human rights as well as the need for developing a common strategy to deal with China and Russia.

Europe is right that Biden’s election offers an opportunity to build a strong and enduring partnership -- but success will require Europe to be strong, united and committed in that very effort as well.