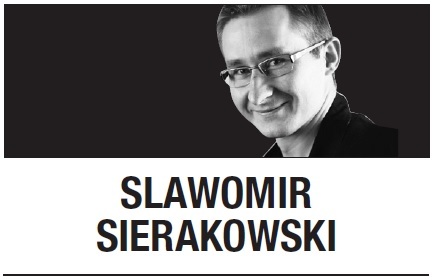 A half-billion people across the European Union have effectively been held hostage by United Poland, a tiny Polish political party that is largely unknown even among the country’s voters. At issue was a principle that 66 percent of Poles support: EU funding should be made conditional on a recipient country’s respect for the rule of law -- a key provision in the EU’s 2021-27 budget and COVID-19 recovery fund.

Reports this week ahead of an EU summit to discuss the issue suggest that Poland and Hungary have accepted the EU presidency’s budget proposal. It still needs to be approved by the Netherlands and other member states, as well as critics within the Polish government.

With Poland’s ruling Law and Justice (PiS) party waging war on the independence of the country’s judiciary for years, its opposition to the rule-of-law provision comes as no surprise. But it is important to understand the complicated politics behind Poland’s current position vis-a-vis the rest of the EU. Only then can the current impasse be broken, potentially creating a domino effect that topples Poland’s de facto leader, Jaroslaw Kaczynski, and ends the current era of populist rule in the country.

Poland’s threat to veto the EU budget as long as it includes a conditionality mechanism is a function of the rivalry between two politicians: Prime Minister Mateusz Morawiecki of PiS and Minister of Justice Zbigniew Ziobro of United Poland. Both are angling to succeed Kaczynski, and both are prepared to sacrifice Poland’s welfare -- and Europe’s -- for their own ambitions.

Neither Morawiecki nor Ziobro is an independent politician who would have gotten to where he is on his own. Morawiecki once led a large Polish bank and advised former Prime Minister Donald Tusk (Kaczynski’s archrival), neither of which ingratiates him with PiS. After three years in office, the party still treats him as an outsider. Nonetheless, Kaczynski appears to view Morawiecki as his successor, perhaps betting that he would be a pliant but sound economic manager.

Ziobro, for his part, leads the most radical right-wing faction in the ruling United Right coalition. In practice, United Poland members of parliament run on PiS lists in parliamentary elections, but they are ultimately loyal to Ziobro, whose views and political style make him much more suited to be Kaczynski’s successor. But he has yet to win the current leader’s endorsement.

Poland’s standoff with the EU coincides with a number of domestic developments that have led to the collapse of PiS’ public support, which has fallen to 27 percent. Since mid-2017, that figure had not dipped below 40 percent; but now, Kaczynski’s party barely edges out the second-place Civic Coalition, which has 25 percent support.

Moreover, combined public support for the Polish opposition is now double that of PiS. And though the next general election will not take place until 2023, the ruling camp could lose its parliamentary majority if Jaroslaw Gowin’s Covenant, a slightly more liberal faction, or United Poland withdraws from the coalition. PiS needs each party’s 20-odd votes in the 460-seat Sejm to maintain its hold on power.

The second factor behind PiS’ loss of support is COVID-19, which is currently hitting Poland especially hard. The government has been accused of failing to prepare for the predictable fall surge, and the crisis has been compounded by PiS’ previous decision to abandon long-needed health care reforms in favor of politically expedient social transfers.

The EU conflict, too, has contributed significantly to PiS’ problems. Support for European integration remains high in Poland, and though this doesn’t usually translate into support for pro-European parties, it is safe to assume that a cutback in EU funds for Poland will mobilize voters against PiS.

There is a reason why PiS avoids unequivocally anti-EU rhetoric. Most often, it calls for “dialogue” or blames disagreements on a single official, such as European Commission Executive Vice President Frans Timmermans, rather than on the EU as a whole. In fact, Morawiecki’s rise to the premiership in 2017 was supposed to help normalize relations with the EU, following his predecessor Beata Szydlo’s tension-packed tenure.

In any case, Ziobro has calculated that the rule-of-law crisis presents an opportunity for him to gain an advantage over Morawiecki. He recently sent an open letter to the prime minister arguing that: “A proposal to link payments from the European Union budget to the so-called rule of law, in the event of its entry into force, would radically worsen the status and position of Poland in the EU for decades,” he wrote. “We both know that this is not about the rule of law at all. The ‘rule of law’ is only a pretext to introduce the institutional and political enslavement of the Polish state.”

The conditionality mechanism has already been voted into law, and any declaration making it “clear” that the mechanism applies only to budgetary issues would have no legal validity.

In this respect, Ziobro is right. He has already publicly announced that every compromise is a capitulation. Ziobro wants to paint Morawiecki into a corner. If he compromises with the EU, he will lose Kaczynski and PiS’s support; if he vetoes the EU budget, he will lose out on funds that are necessary to govern Poland. His last, best chance is thus to get the conditionality mechanism watered down, thereby preserving both EU funding and something close to the status quo ante.

The softening of the government’s position means either that Kaczynski was bluffing in his support for Ziobro, or simply that he had to face reality. Either way, a political defeat for Ziobro could lead to the break-up of the United Right.

Over the past five years, the EU has repeatedly failed to prevent PiS from subjugating independent institutions, including the judiciary and the media, and laying the foundation for an authoritarian “illiberal democracy.” In finally responding with the rule-of-law mechanism, the EU is testing not just Poland but also itself. Like Poland, it may ultimately choose economic benefits over the rule of law -- and regret it in the long run.